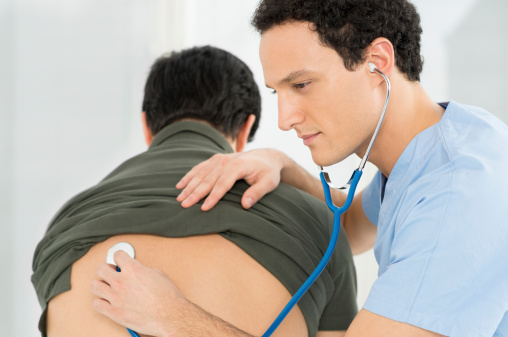 All of the receptionists at the 11 Ventura County Centers for Family Health speak Spanish — because they have to.

About 30 percent of the primary-care centers’ patients don’t speak English and likely wouldn’t have access regular medical care if it weren’t for bilingual offices. Approximately 70 percent of the patients prefer to speak Spanish, said Victor Dominguez, a family practice physician at the Santa Paula clinic and medical director for the centers.

“If you went to the Santa Paula clinic, you wouldn’t even think you’re at a clinic in the United States because everybody’s speaking Spanish all the time,” he said.

The growing number of immigrants from Mexico and other Spanish-speaking countries into Ventura County has led to a shortage of bilingual providers that the nonprofit Centers for Family Health are attempting to address.

“I truly believe the Centers for Family Health serves the needs of the underserved, because we serve everybody — we do not turn anyone away,” said Kimberly Bridges, assistant vice president of the centers.

Ventura County is divided between the wealthy enclaves of Thousand Oaks, Moorpark and Camarillo in the east and the working- and middle-class cities of Ventura, Oxnard and Santa Paula in the west. All but one of the centers, in Camarillo, are located in the western portion of the county.

The centers have charity-care programs for migrant workers, low-income families and those without health insurance, some of whom negotiate to make upfront cash payments. When the centers were established in 1994, they were among the only primary-care facilities in the county that accepted Medi-Cal, California’s Medicaid health insurance program, Bridges said.

The centers are run by Community Memorial Health System, which also operates two hospitals in Ventura and Ojai.

About 80 percent of the providers at the centers are fully bilingual, Bridges said. Nearly all of the others speak enough Spanish to communicate adequately with patients, she said.

“You pick it up,” Bridges said. “In order to give good care, you have to have these skills.”

Bridges, a former nurse, learned Spanish while working at Los Angeles County and University of Southern California Medical Center for 10 years beginning in 1992.

“I would point to my stomach and they would say ‘estómago,’” she said. “I really learned to speak Spanish from my patients — they taught me.”

Throughout Southern California, as the Spanish-speaking population grows, it’s becoming increasingly difficult to get a job in a health-care field without speaking the language, said Bridges, who has worked at the centers for the past eight years.

“It’s an ever-growing necessity, because everyone needs health care,” she said. “In Southern California, Spanish is the language that is becoming a close second to English. I don’t see that going away.”

The centers employ 55 physicians and 20 nurse practitioners and physician assistants. The centers also see a number of people who speak Mandarin, Korean and Filipino, so executives try to have some staff members that can speak those languages as well.

The nonprofit tries to ensure that fully bilingual centers are located in areas where large majorities of patients speak Spanish, such as Oxnard and the more rural cities of Santa Paula, Fillmore and Oak View where many migrant farm workers live. Every medicine pamphlet, registration form and health advisory the center distributes is printed in Spanish on the back side.

Alex Villasenor, a receptionist at a clinic on Vineyard Avenue in Oxnard, said he can often see the relief on patients faces when they learn that he and the doctors speak Spanish.

“Some of the patients come in and they’re looking around kind of cautiously,” he said. “They might acknowledge you in English, but when they actually ask questions, especially with the doctor, they do it in Spanish.”

Patients who don’t speak English fluently often want to discuss their health in their native language to make sure they fully express themselves, Dominguez said.

“I find that a lot of patients don’t feel comfortable communicating with a provider that doesn’t speak Spanish, because they don’t like to bring an interpreter into the room, and there are privacy issues associated with that,” he said. “Also it’s very important in terms of having good-quality care, so I can really get the whole history of a patient.”

Dominguez said he can identify with these patients, because his parents prefer to speak Spanish with health-care providers.

Being bilingual can save patients’ lives, preventing overdoses of medications and allowing for the correct diagnoses, he said.

“A lot of patients are on blood thinner and I have to go over the instructions a couple of times in Spanish — imagine if I didn’t speak Spanish,” he said. “It’s easy to have some sort of miscommunication that can put a patient in a situation that can cause them to bleed.”

There are cultural differences too that make patients more comfortable discussing their health with a Spanish-speaking doctor. At doctors’ offices in Mexico, patients typically don’t speak to a nurse or physician’s assistant first — they speak directly to the doctor, said Petra Luna, comprehensive perinatal services program manger for the centers.

Patients also usually pay only upfront in Mexico; they aren’t sent a bill later as they commonly are in the United States, she said.

“When they come here, they give you so many charges and patients don’t understand,” Luna said. “You have to pay at the clinic and the lab and to have a doctor read your results. Cost becomes an issue.”

Doctors at the centers also sometimes work with neighborhood priests, respected figures in the Mexican culture, to help encourage patients to take their medications or get preventative checkups.

“The priests will help us, and they can play a significant role in what patients are doing for their conditions,” Luna said. “There’s no prevention concept for a lot of these patients, so that’s something we’re trying to implement and integrate.”

Luna runs a Medi-Cal program for pregnant women, enabling them to receive prenatal check-ups, counseling and nutritional guidance. Understanding Mexican culture and traditions can be just as important as speaking the language in treating these patients, she said.

“Knowing the culture, the customs, the religions and trying to be sensitive to that is so important,” she said. “It makes the patients feel like people.”