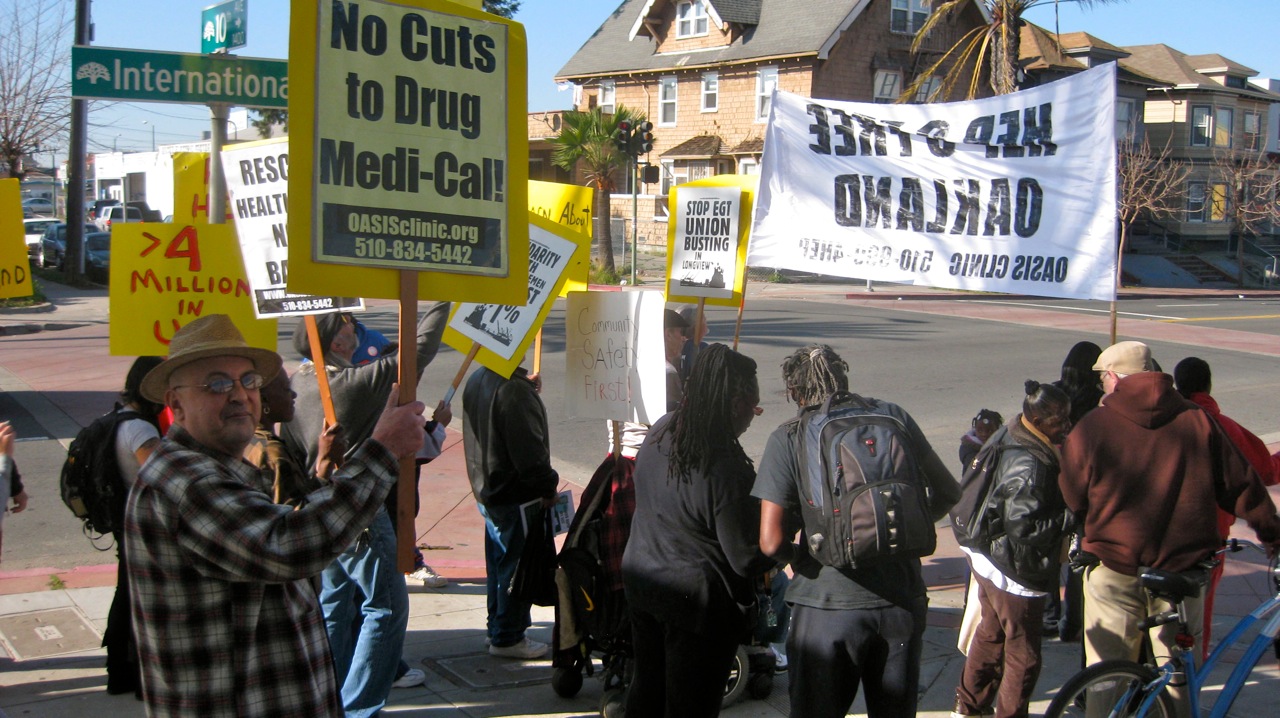 A rag-tag band of protesters is becoming familiar on the streets of Oakland and they’re not part of the Occupy movement. This miniature society, which has a “Hep C Free Oakland” as its goal, is a group of patient-volunteers and staff members from a medical clinic focused on treating hepatitis C in people with addiction problems.

The Organization to Achieve Solutions in Substance Abuse (OASIS), established in 1999, is a locus of hepatitis C research and education in Oakland. Its director, who was a young doctor working in an area methadone clinic, says she set up shop when she realized that about 95% of former injection-drug users had been exposed to the virus.

Out of the clinic a slew of health care activists were born. Hepatitis C became an emblem for improving care and access to marginalized populations. “Hep C Free Oakland” is essentially a public campaign to find patients like themselves, who won’t otherwise seek medical care.

The hepatitis C virus (HCV) is most widespread among individuals largely overlooked in national health surveys. Drug-addicted, mentally ill, homeless, and incarcerated people run the highest risk of getting—and passing on—the infection. Although it can be easily screened and much of the time cured, health experts estimate that over half the people who carry the virus in the U.S. do not know they have it.

Hepatitis C earned the nickname “the silent killer,” because it often lays dormant for decades without triggering symptoms in the people who have it. But lately the virus has been flaring up. Aging baby boomers who became infected decades ago are experiencing hep C-related liver problems, attracting national attention, if not funds. Hepatitis C is now the leading cause of liver disease, liver cancer, and cirrhosis leading to transplantation.

Of those infected, roughly a third eventually experience serious liver damage. Those who don’t get sick, however, can still pass it on.

People who inject drugs are extremely likely to have been exposed to the virus, given its high prevalence and easy transmission—HCV can live in tiny drop of blood for days, and travel in other paraphernalia like spoons or rinse water.

Hep C now kills more Americans than HIV, causing more than 15,000 deaths every year since 2007, according to a February CDC report.

With that in mind, the patient-activists and their doctor — internist and addiction specialist Diana Sylvestre — chose methadone clinics as an appropriate launching pad for the awareness campaign. Cooperating methadone clinics have allowed activists to test and educate on the premises, turning the waiting rooms into sites for a mobile health care campaign.

For Sylvestre and others like her, wanting to test and treat “hard to reach” populations, waiting for patients to come to them isn’t always an option. It’s an effort that depends largely on volunteer, non-professional health care workers and cheap tools like poster board and buttons.

“Since hepatitis C is our specialty,” says Sylvestre, “we thought we should get rid of it in our own backyard.” Organizers pointed out that in the last ten years, testing sites and resources have grown despite the dearth of public health funds dedicated to hep C.

“It’s very word-of-mouth, what we’re doing,” says Larry Galindo, an OASIS staffer who has battled hep C since his Marine Corps days in the 1970s. “Nobody in Oakland who has hep C should be without care.”

In February, the OASIS group staged its first in a series of public demonstrations to shape perceptions about hepatitis C. The band of roughly 30 encompasses a range of addictions, mental and physical health problems, and splintered family histories. But the patient-activists say these challenging social circumstances are precisely what make them effective in fighting hepatitis C, which they call a “disease of the marginalized.”

Chanting ‘Get Hepatitis C Out of Oakland,’ the group left the 14th street methadone clinic for Lake Merritt, ending up around a mobile testing van on the far side of the lake. On the day of the first march, three out of the five Oakland residents who approached the mobile van showed exposure to hep C.

Predictions made in the journal Nature and elsewhere say 150,000 Americans will die from viral hepatitis in the next decade. While awareness grows, advocates say they would be thankful for a sliver of annual government funding provided for HIV. Over $2 billion in federal money went to HIV treatment last year, while less than $70 million subsidized hep C care.

Last year, the musicians Natalie Cole and Greg Allman went public with their hepatitis C infections, from using needles “back in the day.” Though Allman says his was a tattoo needle, the celebrity endorsements kindled more national activism.

A few years ago, hep C advocates half-jokingly called themselves the “unwanted stepchildren of infectious disease.” Now, Chavez says, that is starting to change.