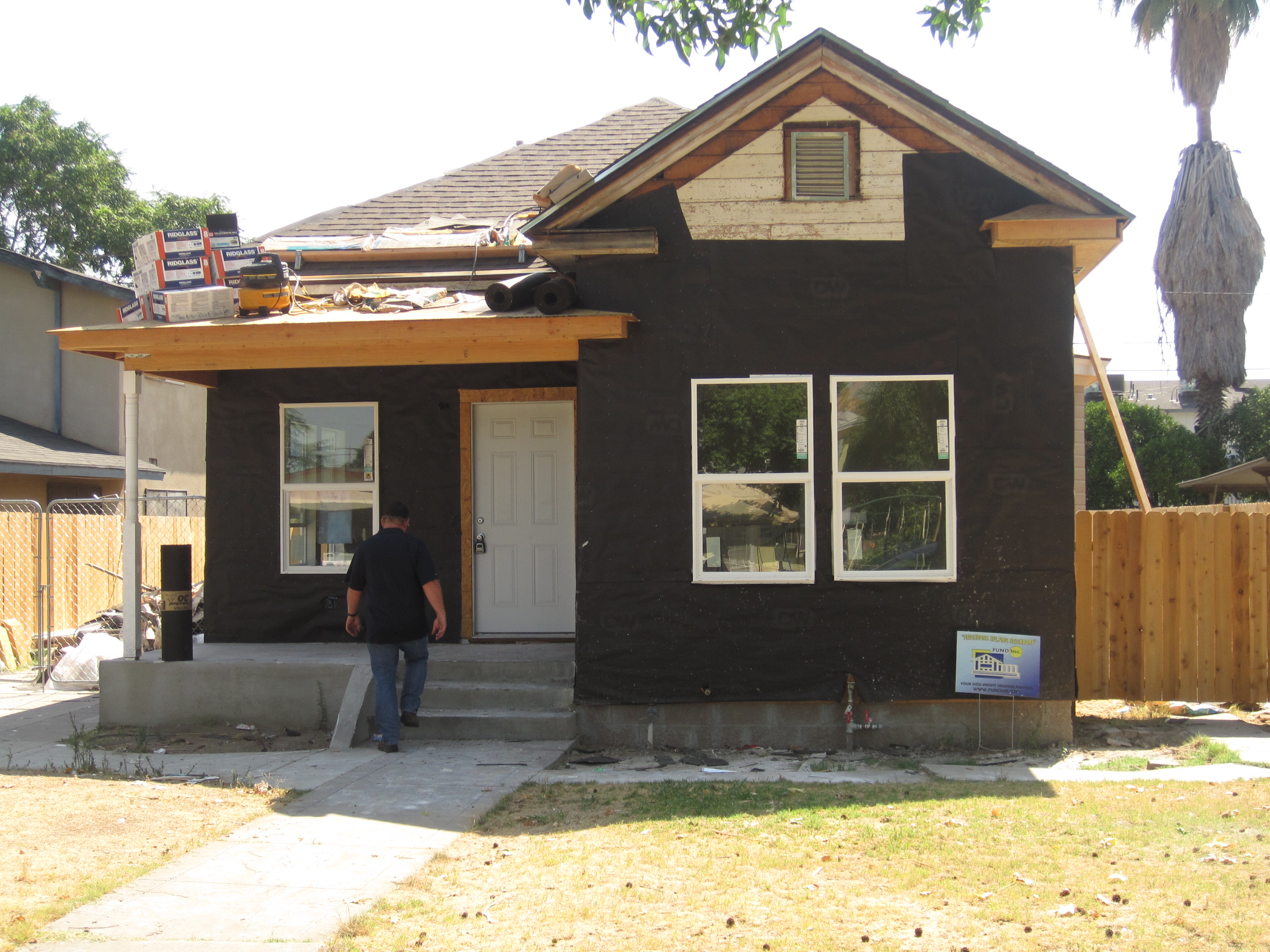 Bob Dittmar’s day begins on the roof at six in the morning. The late summer sun is punishing even at this early hour. This isn’t one of the new suburban houses that crop up quickly in the northern parts of Fresno. Dittmar is downtown, in a long-neglected area known as the Lowell neighborhood, which takes its name from the nearby elementary school, though its roots, and its struggle with poverty, go back generations.

And Dittmar isn’t a construction worker. He’s the executive director of FUND, the Fresno Urban Neighborhood Development Corporation, a group tackling multi-generational poverty in some of Fresno’s urban areas by helping residents repair – and in some cases rebuild – dilapidated housing.

Families who need help with their homes must apply to FUND, and be willing to participate in and provide friends and family to work on the project. FUND receives several applications for home repair per year, according to Dittmar. Some owners are able to bring an entire family to help with the work; others may have a smaller network that can be supplemented with FUND volunteers. The goal, according to Dittmar, is not just about home repair. He also hopes to strengthen family and community ties.

“The project is a need, but it’s also a catalyst for us to get the community working together and building a stronger network of neighborly associations,” he said. “Now that this is happening, they may come across the street to their neighbor’s house and ask if they need any help. Or it may inspire more conversations and people are introducing themselves to one another.”

“When you see your neighbor left their trash can out instead of getting mad, I would rather say ‘Oh there must have been a reason. I’ll put it up by his garage for him,’” Dittmar said. “How have we gotten to that point where we can’t see our neighbor’s trash can and put it back for him?”

FUND is a small, not-for-profit operation that was founded in 1995. Deputy executive director Tonya Nichols does much of the grunt work of calling corporations for donations, arranging supplies and maintaining contacts with neighbors. Sometimes donations roll in from a big box retailer. Other times she must resort to scouring Craigslist for supplies.

Many of the residents FUND has helped, Nichols said, stay connected to the organization, helping with other projects.

Every day is its own, with an unpredictable mix of people wandering in to the office to ask about help for a house. Nichols and Dittmar remember some dire situations, such as two women who had moved into the garage for a year because the rest of the house was in such poor shape.

For Dolores Torres, the improvements FUND did to her home were the answer to “a lot of praying.”

Her modest house, part of a property she shares with her father and brother, once had a roof that was badly in need of repair. Her family was unable to afford to fix it until FUND came along. She spoke fondly of the 40 volunteers that helped repair it and provide other needed improvements.

“It was just amazing,” she said. “We had a whole crew of high school kids out here working. It was so great for the neighborhood.”

Fixing existing homes is only one of many strategies of Fresno-area organizations seeking to revitalize downtown and help low-income people in the process. The Coalition for Urban Renewal Excellence (CURE), for example, focuses on helping low-income buyers purchase a house. Since it launched in 2000 the non-profit has built and sold over 130 houses to low-income families.

Instead of fixing older houses, CURE seeks to build new homes in areas where there typically isn’t new construction. CURE homes may be the first on a street to have new appliances and updated finishes, according to Executive Director Nathan Magsisg. When new houses go up, he said, it spurs neighbors to make improvements to their homes.

One homeowner who has been grateful for Magsig’s work is Nha Nguyen. He and his family recently moved into one of CURE’s homes on the west side of Highway 99. He credits the CURE director with a hands-on approach to seeing that all construction work was done properly and that the family felt comfortable once they moved in.

“The CURE organization has done a tremendous deed to our family time and time again,” Nguyen said.

“When we come into a neighborhood we often notice things start to improve. Other neighbors begin to fix up their house and make repairs because they see how good a house can look,” Magsig said.

To make this happen, CURE essentially functions like a development company. Magsig is frequently looking for new properties to purchase, applying for grants or overseeing construction projects.

“We wear a lot of hats and work with a lot of different agencies,” he said. “We are a grant writer, general contractor and developer. That uniquely qualifies us to do projects those other entities that only focus on the sticks and bricks can’t do.”

New owners of CURE homes are in nearly all cases first-time homeowners, and CURE requires the owners to take home ownership courses so they will be prepared to perform maintenance, such as changing the air filters, checking smoke detector batteries, basic plumbing repair and landscape care.

Magsig hopes that this training and increased community involvement will lead to better looking neighborhoods. Both agree the ultimate goal is more than beautification: it’s to make a street feel like a neighborhood.