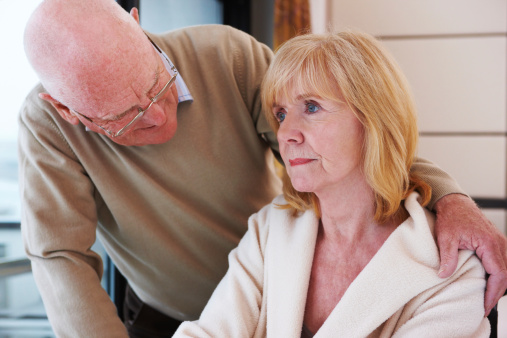 Californians caring for aging, ill or disabled loved ones are stressed out and making some poor health choices for themselves, according a new report by the UCLA Center for Health Policy Research.

The analysis finds that Californians looking after relatives or friends who can no longer manage on their own report higher levels of serious stress and are more likely to smoke or be obese than those who don’t shoulder the responsibilities of caregiving.

“Stressed and Strapped: Caregivers in California” profiles the demographics and health behaviors of those who serve as informal, often unpaid caregivers. Researchers estimate that in the past year, more than 6 million Californians have tended to a family member or friend with a long-term illness or disability.

“Caregivers are taking on a tremendous amount of responsibilities, almost like a second job, and they’re apparently not taking very good care of themselves,” said Geoffrey Hoffman, lead researcher. “They might be setting themselves up to be the next generation of care recipients.”

The analysis draws on information gathered in the 2009 California Health Interview Survey, which for the first time asked respondents about their experiences with caregiving.

• The report finds caregivers spend an average of 20 hours a week helping with bathing, cleaning, shopping, medication management and other tasks. Few are paid, and only 13.5 percent rely on respite services for occasional relief.

• Caregivers report higher levels of moderate and serious psychological distress than non-caregivers. About a third report that their emotions severely interfere with their daily chores and social lives, compared with about a quarter of non-caregivers.

“Middle-aged caregivers could be what some call the sandwich generation because they’re struggling to meet the needs of children and aging parents,” Hoffman said, noting that most have full-time jobs in addition to their caregiving duties and nearly a third are single, divorced or widowed. “Our concern is that middle-age caregivers are exhibiting psychological stress and negative behaviors that are risk factors for a number of chronic diseases. They are really setting themselves up for poor health in the future.”

Craig Sheffer, 52, of Santa Rosa knows, professionally and personally, about the stresses of caregiving.

As a clinical services manager for the St. Joseph’s Health System hospice in Sonoma County, Sheffer sees families deal with caregiving in both positive and negative ways. “There are people who do things that are not good for their health and others who find diversions that are better for them,” he said.

As the father of an 18-year-old daughter with severe pulmonary hypertension, Sheffer has learned how to cope with the intensity and demands of caregiving. Pulmonary hypertension is high blood pressure in the arteries of the lungs, and his daughter was diagnosed with the condition when she was 6. For the past 12 years, Sheffer and his wife have managed her daily health care, administering an intravenous drug through a chest catheter and making sure 15 oral medications are taken at their proper times.

“One of the things my wife and I did early on was decide we were going to hold hands through the darkness,” he explained. “We recognized that when the stress became really intense, it would be too easy to take it out on each other, so we decided we needed to be a team to get through this.”

Sheffer also credits the support of friends, resources available through the Pulmonary Hypertension Association and the stress relief he gets from playing baseball and his wife gets through regular hikes.

For Diana Kaljian, the findings of the UCLA analysis are remarkable but not surprising.

“It’s something we see regularly in our work,” said Kaljian, director of Sonoma County’s Adult and Aging Services division. “The caregiver is very stressed, to the extent they neglect their own health. Caregiving is very isolating and very emotionally difficult. It’s a heartbreaking and frustrating process to see the person you love decline.”

Kaljian said people often don’t know where to turn for help when they are overwhelmed by the logistics and emotions of long-term care, and that uncertainty will be exacerbated by recent program cuts.

The Legislature earlier this year voted to eliminate the state’s Adult Day Health Care program, which serves about 35,000 Californians at risk of going into nursing homes. That program is scheduled to end Dec. 1. Lawmakers also cut funding for California’s In-Home Supportive Services, which supplements family caregiving, and targeted that program for even larger cuts if state budget projections fall short.

Despite the grim outlook for state-funded services, Kaljian said there are community programs and private services that can help in-home caregivers. “It’s important for people not to assume there’s nothing out there,” she said.

Some private agencies may offer sliding scale fees, scholarships or assistance for caregivers dealing with specific conditions, such as Alzheimer’s. She suggests caretakers reach out to the regional Caregiver Resource Centers, nonprofit agencies located throughout the state that serve as clearinghouses for local support services.

“Stressed and Strapped” was funded by The SCAN Foundation, a nonprofit whose work focuses on health care and policies that help seniors retain their independence. The report urges support for new federal Affordable Care Act provisions that could fill state program gaps, and suggests new policies that could better coordinate the remaining services offered by various state agencies.

However, researchers are not optimistic about the future of caregiving in California.

“Given the reduced funding for community-based programs and the uncertain effects of ACA provisions, caregivers should foresee difficult times ahead,” they write. “The current long-term care system, with its heavy reliance on unpaid, informal care, will likely be unsustainable in the long run.”