Casa Dominguez turns concept of housing project on its head 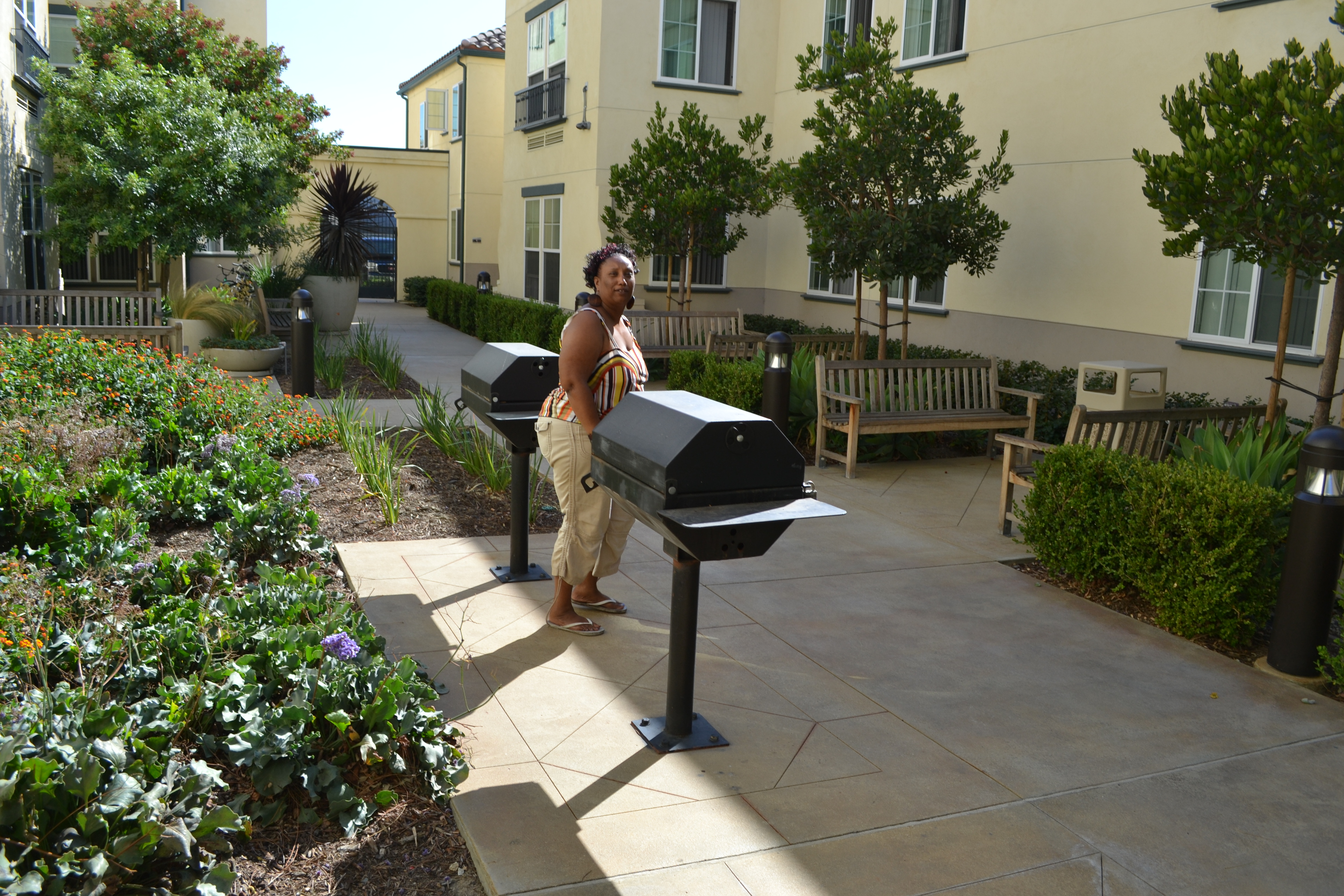 When Shangaza Wade wishes to emphasize something, she adds the word “bam” after each declaration.

Take, for example, her response when asked why the mother of two young children chose to move to Casa Dominguez, a cutting-edge affordable housing complex in Los Angeles County.

“The services and how they have a day care center, bam! doctors, bam! dentists, everything, all in one facility,” Shangaza said during a recent interview in the community room at Casa Dominguez.

Shangaza’s enthusiasm for Casa Dominguez is understandable. The 70-unit complex sits along Atlantic Avenue about 15 miles south of downtown Los Angeles in East Rancho Dominguez, an unincorporated area of L.A. County within the city of Compton. Located just off Interstate 710, Casa Dominguez has turned the concept of a housing project on its head.

The on-site Federally Qualified Health Center provides a number of services to the East Rancho Dominguez and Compton communities at large, and is not exclusively for Casa Dominguez residents. Patients have access to medical, mental and dental care; a dispensary; and other resources such as a nutritionist to discuss health education. The clinic offers two providers on a daily basis, working out of four exam rooms, seeing a total of approximately 50 patients a day.

“It’s open to the community, but we have a high percentage of patients that come from the residents,” said Emmanuel Gamboa, clinic manager at St. John’s Well Child and Family Center East Compton Community Health Center at Casa Dominguez. “As you can see, we’ve outgrown this,” Gamboa continued, motioning toward the crowded waiting room on a Tuesday afternoon in October. He added that St. John’s, which operates a number of clinics in the greater Los Angeles area, recently opened another center approximately a mile away at Dominguez High School.

A benefits counselor is on site at the clinic to help folks figure out their coverage options. Gamboa estimates that 60 percent of the patients the clinic sees are uninsured. Many patients, such as Wade and her neighbor Maria Palma, rely on Medi-Cal.

Palma has been a resident of Casa Dominguez since it opened, and lives in a four-bedroom apartment with her husband, three children and two grandchildren. When her family was looking for a new place to live, and her husband wasn’t working, friends of Palma’s told her about Casa Dominguez. She seeks treatment for her high blood pressure and arthritis at the clinic, and her two grandchildren use the computer lab and after school program. She said she likes the conveniences of the services.

“A lot of patients, particularly the residents, they love it,” Gamboa said. The clinic is opened eight hours a day, six days a week. “They love it because they don’t have to worry about transportation. They can just walk right in and get an appointment, easy access.”

The land that Casa Dominguez now occupies off the Long Beach Freeway was once a brown field site owned by the County of Los Angeles, which had plans to redevelop the property with a mixed-use facility. Robin Hughes, President and CEO of affordable housing developer Abode Communities, had been working with the nonprofit Children’s Collective, which provides educational and family support, on another project. The conversation turned to finding a place where Abode could build a housing complex that included not only child care services, but a health clinic as well. One thing led to another, and the $28 millions Casa Dominguez was born as a collaborative effort between Abode Communities and the L.A. County Community Development Commission. The property opened January 2010.

“We felt that if we were going to do a mix use project, having a community-serving use would be great, and we were working on a partnership to help find a site,” Hughes said, adding that other Abode Communities properties feature early education centers, but not a health clinic. “I don’t know if it’s the first in the United States, but it’s definitely a unique model.

“This is a good example of giving families a sustainable, affordable place to live and at the same time providing access to affordable healthcare and childcare,” Hughes continued. “So now they can do it while keeping their jobs, doing better, getting better jobs, going to school, things like that, because here in one location we have all of those components together. It works out really well.”

The nearly 99,000 square foot Casa Dominguez has no vacancies, and those who live there must have a household income between 30 and 50 percent Area Median Income. Rents range from about $396 dollars for a one-bedroom apartment to $1,279 for a four-bedroom.

Adding to the project’s uniqueness, seven apartments are set aside for young adults transitioning out of foster care.

“We love complicated things,” Hughes said with a big smile. “We had been trying to address the housing issue for transition age youth throughout the county, and we thought it would be a great opportunity to integrate those young adults with families in this development. We thought it would be a good opportunity to support the county in that effort.”

“Obviously for the transition age youth to be able to have the keys to their own home, it was spectacular, because it was their first time experiencing that in most cases,” Hughes added.

While its affordability and the location of the St. John’s clinic are the main draws at Casa Dominguez, the complex offers more. A community room plays host to social events and after-school programs; and a computer lab with multiple PCs and Macs is on site for students and adults. The on-site services coordinator makes sure all needs are met.

And to top it off, the Casa Dominguez has been LEED Platinum certified. Grey water from the laundry room irrigates the landscape, solar power provides energy for the common area, and the building is made of sustainable materials.

Wade has been at Casa Dominguez since the property opened, and lives in a three bedroom with her two children. She lived in Los Angeles and needed a bigger, more affordable place for her family. She’s currently not working, and receives treatment for her high blood pressure and diabetes at the clinic.

“When they told me that they were going to open this, I was like, all right,” Wade said.

Money generated from the property, grants and other fundraising efforts by Abode fund Casa Dominguez.

“We believe that housing is the first step towards stabilizing people, stabilizing the lives of people,” Hughes said. “But the support services we really feel is what takes families to the next step towards self sufficiency. It really is about trying to address issues around poverty and self sufficiency and things like that. We just feel like it’s a critical part of building support in the community.”

Casa Dominguez turns concept of housing project on its head