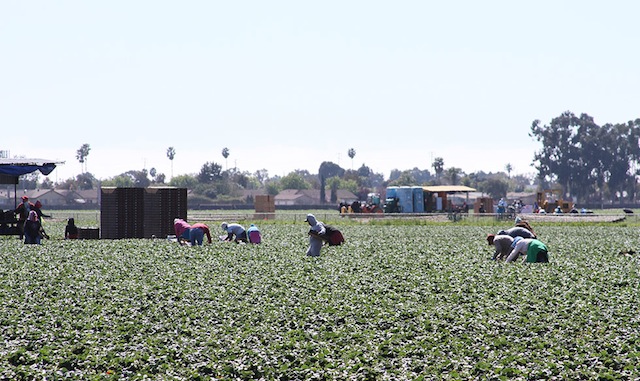 Nearly every afternoon this summer, Florencia Ramirez drove past the strawberries and lima beans growing in the Oxnard plain, and each time she grew angry about what she saw.

As the plants gulped in the Southern California sun, high-powered sprinklers ricocheted over the fields, spraying water into the air during the heat of the day, when evaporation was at its peak.

In an area plagued with water shortages and droughts, some of the largest agricultural producers in the nation seemed to be using water with abandon, Ramirez observed.

“I couldn’t believe it,” she said. “We live in what is technically a desert and I pass thousands of acres of farmland everyday that are wasting a tremendous amount of water.”

The Oxnard resident, who holds a master’s degree in public policy from the University of Chicago, wondered if there was a better way. She began to research agricultural water use and stumbled upon the concept of dry farming — which uses only precipitation to grow crops.

“I found out that even here, amidst all these irrigated farms, there are a few people dry farming, growing wheat, olives, even apricots, with limited water,” she said.

Ramirez, whose friends aptly call her “Flo,” is now turning her anger at water waste into action. She’s writing a book aimed at consumers on how to “Eat Less Water,” a trademark phrase she uses to explain the concept of conserving the natural resource through farming practices and grocery-buying habits.

Dry farming doesn’t work in all locations or for all crops, but it can work successfully even in relatively dry climates, such as Southern California’s, she said. And many of the principles of dry farming, such as paying close attention to the weather and soil composition, can be applied to conventional farming to help save hundreds of thousands of gallons of water a year, Ramirez said. Those plants that require more water, such as lettuce or many vegetables, can be drip irrigated, instead of watered with sprinklers or by flooding a field.

Ramirez says water experts predict that by 2025, two-thirds of the world will be experiencing water scarcity.

“We live in this illusion that we have enough water, but most places, like right here in Oxnard, are experiencing water deficits, which means we are using more than is naturally replenished each year,” she said. “It’s not sustainable.”

The average American household uses 100 to 150 gallons of water daily, a huge amount compared to the four or five gallons an African family uses each day, Ramirez said. “But what we use on a daily basis really is a drop in the bucket compared to industrial use and the virtual water footprint of what we eat, drive and wear, which is 1,100 to 1,300 gallons per day,” she said.

Seven out of every 10 gallons of fresh water on the planet are used to grow food, “so if we’re going to have a true conversation about water usage, we have to talk about what we eat,” Ramirez said.

The U.S. Department of Agriculture’s organic certification doesn’t include any stipulations on water usage, something Ramirez would like to see changed.

Dry farmer John DeRosier grows primarily wheat, spelt, corn and a number of other grains on five parcels in Paso Robles. He said the key is creating rich soil by rotating crops and conserving moisture.

“That’s absolutely paramount to the whole flow of the operation,” he said. “Although it’s called dry farming, it’s ultimately water management. Instead of rainwater being stored in reservoirs or piped down from the delta, it’s all stored in the subsoil.”

Although dry farming sometimes results in smaller yields than conventional farming, DeRosier said his crops, particularly his tomatoes and watermelons, are much tastier because the sugars are concentrated and they’re not waterlogged.

About 80 percent of the state’s developed water supply goes to agriculture, said Katy Mamen, program director for Ag Innovations Network, a nonprofit that remains neutral on water usage but holds forums for farmers to dialogue on the issue.

Although oftentimes curbing water runoff from farms can help conserve water and prevent pesticides from traveling, it can also have negative effects, altering nearby ecosystems, and resulting in less water seeping into the deep soil to recharging the ground water, she said.

“It’s complicated and real solutions have to be tailored to each individual farm,” Mamen said. “When we talk about water stewardship, there’s not a one-size fits all approach.”

Ramirez says her goal is to get consumers to push for water conservation by buying from dry farmers and growers at farmer’s markets to cut down on water usage. From her kitchen in Oxnard’s historic district, Ramirez serves meals made with ingredients grown on dry farms, and she’s teaching other local residents to do the same. She holds regular cooking classes and has a blog, eatlesswater.com.

At a recent pizza making class, she told the dozen women gathered that 321 gallons of water are used to produce the ingredients in a typical Margherita pizza. That’s 40 gallons a slice.

“It really made me think about how much water we actually use and how much we take it for granted,” Ward said. “So often it’s just automatic when we go to the grocery store, so it’s nice to interrupt that pattern and think about ways we can make a change for the better.”

Ward now uses Ramirez’s tips to make bread with her two daughters in her own kitchen, she said.

Throughout 2012, Ramirez is visiting dry farms across the country and writing about her experiences in her book, which she expects to be published in the coming year. The granddaughter of farm workers, Ramirez says she feels that caring about land and water use is in her blood.

“I want to be a part of rewriting what our current story is when it comes to water on the planet,” Ramirez said. “I want to do it for my kids, who are going to inherit this world.”