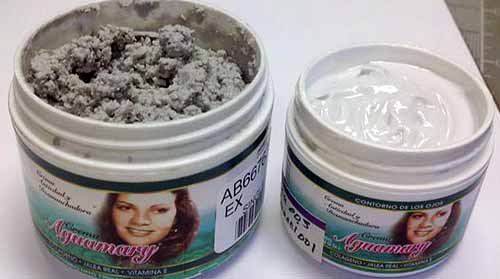 SAN FRANCISCO — There could be a dark side to skin-lightening creams often found in stores that cater to ethnic communities.

Starting next week, California health officials will collect and test a sampling of skin-lightening products in the Bay Area for possible mercury contamination. Health officials launched the investigation in response to a spate of mercury poisoning cases linked to the tainted face creams that are made outside the United States.

A handful of cases emerged in the mid ‘90s, but it was a 2010 case involving a 39-year-old Latina and her family in Alameda County that spurred the state to action.

An investigation traced the source of her mercury poisoning to an unlabeled jar of face cream, which relatives from Virginia had brought back from Mexico and given to her.

State health officials, working with their Virginia counterparts, identified in total 22 people who were exposed to mercury through similar face creams, including extended family and friends. The case was highlighted last week in the Center for Disease Control and Prevention’s Morbidity and Mortality Weekly Report (MMWR).

“This is one of the first investigations of the problem within California,” said Dr. Rapali Das, chief of the Environmental Health Investigations Branch of the state Department of Public Health and co-author of the MMWR report. “Why [we’re focusing] attention on the issue now — these cases have come to our attention here, we think it’s enough of a problem to address it.”

Last year, the state documented a dozen cases of mercury poisoning from tainted skin lighteners, Das says, and have anecdotal reports of at least another four cases.
Health problems from mercury exposure include “mental and neurological” symptoms, according to Dr. Mark Miller, director of the Pediatric Environmental Health Specialty Unit at UCSF and co-author of the MMWR report, which noted that some of those who were exposed to mercury experienced “numbness, tingling, dizziness, forgetfulness, headaches, and depression.” Encountering high enough levels or chronic exposure can also harm the kidneys, Miller says.

The people profiled in the MMWR report said they used the face cream for “skin-lightening, fading freckles, and treating acne.” Mercury, a metal, is a highly effective skin lightener, because it blocks melanin, which gives hair and skin pigmentation.

“It’s effective. It’s just dangerous for you,” said Miller, adding that the FDA does not allow any mercury in products sold in the United States. He said all the products with dangerous mercury levels are here “illegally.”

Nationwide, state health departments are coming across scores of cases of mercury poisoning through skin-lightening products brought into the country from someplace else. Health officials in Texas, New York, and Minnesota have recently carried out investigations of skin-lighteners, and alerted the public about possible mercury contamination.

In 2010, the Chicago Tribune carried out an investigation of skin-lighteners sold in local stores and on the Internet, and found that out of 50 face creams, six contained “mercury levels banned by federal law.” The six products were made in “Lebanon, China, India, Pakistan and Taiwan.”

California health officials will begin to collect and test a sampling of skin-lightening products from store shelves in San Francisco, Oakland, and San Jose, said Lori Copan with the state health department. She says they will target ethnic stories and swap meets, catering to three “priority groups,” including Chinese, Filipino, and Latino.

In the cases documented last year by California health officials, most involved products that were brought into the state through people’s “personal luggage,” Copan said. The extended family profiled in the MMWR report brought the skin-lightening cream back from Mexico, while two other households bought them in local stores. The products were also made in Mexico.

Copan says the state health department issued alerts about mercury-laced skin-lighteners in 2010, and will be working with a statewide network of “promotoras” — peer health educators — to get information into hard-to-reach communities.

“It is very important. Ladies using the cream not only put it in her face, but using in [sic] her whole body,” said Vicky Avila, health educator with Vision y Compromiso in Redwood City, Calif. “They put the cream on babies…it’s a big problem for them.”

The case that prompted California health officials to issue a health alert in 2010 involved unlabeled products in white jars. Other state health departments have issued alerts about products made in Mexico with dangerous levels of mercury, including Crema de Belleza–Manning and Crema AguaMary.

Last year, researchers from UC Berkeley and UCSF, conducting a health study in collaboration with state health officials, found a Latina in San Francisco with high mercury levels, the source of which was eventually traced to her face cream. In that case, the cream was a U.S. brand name product that was purchased and likely adulterated in Mexico.

“It is not likely that U.S. brand name products for skin lightening would contain mercury. Though there is no real oversight by FDA,” Copan said, adding that any skin-lightening product purchased abroad could be tainted.

Health worker Avila says many of the women she sees prefer to buy products they are familiar with from their home countries, especially new immigrants who want to feel connected to their “roots” and culture.

Avila says the women load up on products when they travel to Tijuana or they may shop for them at local Latino stores in California. Often times, the products may not be displayed on shelves, but carried in a backroom, so they must ask for them specifically.