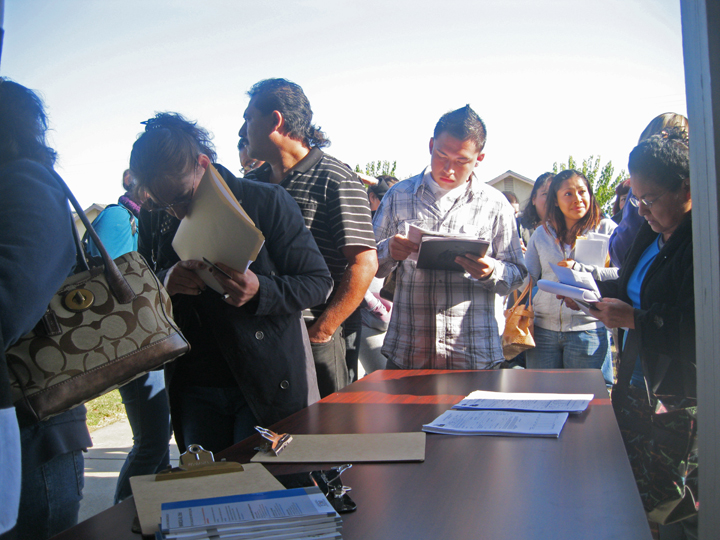 Getting to big cities is hard for many of the Mexican nationals living in parts of California’s Central Valley – but documents that make everyday life possible for immigrants in the U.S. require a trip to the Mexican embassy in Sacramento, Fresno or San Francisco.

“We are very aware of the effort to go to Fresno,” Vice-Consul Lluvia Ponce said at a recent móvil visit to a housing project in Planada, an unincorporated town of Merced County, an hour away from the Consulate.

More than 200 people waited in line the first week of December for their appointment for documents, and 300 more had appointments scheduled the next Sunday, Ponce said.

As people chatted while waiting in line, inside the community center of the housing project consulate workers took photographs and fingerprints. Because the computers are connected to Mexican databases, a matricula card can be issued in just 20 minutes.

A matricula card is proof of the record of the person in the registry of the Consulate. It’s also an acceptable identification card for almost all authorities, accepted in banks in cities and counties throughout California and the United States. While it’s useful in transactions like opening bank accounts, a marticula card is neither a driver’s license nor a migration document.

The Consulado Móvil service in Fresno has been around for several years. Recently, however, staff decided to diversify the cities they visit, to reach populations that are not making it to their usual stops, “especially for people who work in the fields and might not have the time to go,” Ponce said.

AnaLaura Navarette Ramirez, 30, had made the trip to Fresno before. When she called for information on renewing her husband’s matricula card, the Mexitel staff mentioned the December movil visit to Planada.

“It’s better for us to be here,” Navarette Ramirez said in Spanish. “Fresno is much further away for us.”

Ramirez, who is originally from Michoacan, was waiting for her husband’s appointment to finish. Her husband would have to take off a day of work if they go to Fresno, but with the móvil, he only had to take off half a day.

“If they ask for another document, it’s easier for us to go back to Merced to find it,” she said.

There are 10 consulate offices in California, and they all do the Consulado Móvil. On the same day of the Planada móvil visit, the Sacramento office visited Ceres in Stanislaus County and they have plans to stop by Patterson, Modesto, Riverbank and Turlock also in Stanislaus County in the new year, according to Sacramento-based Vice Consul Andrea Lopez de Leon Ibarra.

El Concilio, a community organization serving the Spanish-speaking residents of San Joaquin and Stanislaus counties, has partnered with the Sacramento consulate office to bring their services to underserved communities.

Valladoild said she and her colleagues help find a location to hold the movil, provide the volunteers and promote the event.

“We feel it is vital to bring these resources to the community so we help in any way,” she wrote in an email.

Aside from visiting Stanislaus County three times a year, the consulado movil is at El Concilio’s Stockton office every Wednesday.

“They are very appreciative that they don’t have to drive all the way to Sacramento as some may not have reliable transportation or may lack Drivers Licenses,” Valladoild said.

The need for consulate visits is ever expanding as the number of people of Mexican origin living in California increases.

“We are being proactive to reach out to these people,” Ponce said.

Aside from matricula cards and passports, the consulado móvil offers other types of information on the various social, legal and health services available to them and their American-born children, if they have any. There is also information on how registration to vote for Mexico’s 2012 presidential election from the United States.

For people who missed out on the Planada event, there will be other visits to nearby towns and the Fresno office always takes appointments through Mexitel.

“People come to expect us coming here, and they always come with a great attitude to them,” Ponce said.

Minerva Perez is a correspondent for the California Health Report at www.calhealthreport.org