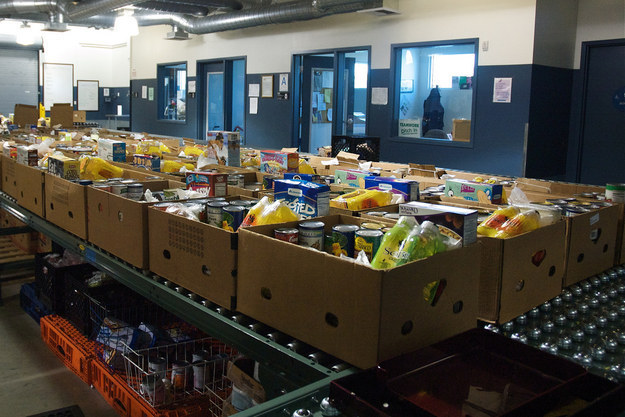 I’m starved. Ravenous.   I’m so hungry I can’t think straight. I certainly can’t work. What I want more than anything is to eat an entire stack of beef ribs.

Kevin Kemp knows exactly how I feel. At 54 — about my age — he’s been homeless and hungry in Long Beach for nearly a decade.

“It’s like running out of fuel in your car,” says Kemp. “You’re just stuck. It’s no energy. Nothing to help you through the daily activities.”

But there’s one difference between my hunger and Kemp’s story, as recounted by Hunger Action Los Angeles. Mine is self-inflicted — it’s the day of my colonoscopy — and I’ve been fasting for 24 hours to prepare for the procedure. As soon as it’s over, I’ll be eating.

Kemp’s hunger, by contrast, is not voluntary but a daily reality.

While statistics for hungry children typically grab the biggest headlines, the numbers for elder hunger are also surprisingly dire — Feeding America estimates that 9% of seniors live in food insecure households. Of California’s nearly 5 million older adults that translates to anywhere between 326,000 to half a million hungry older adults.

The health problems associated with food insecurity include depression, asthma, heart disease and a host of other stress-related illnesses.

At Sacramento’s River City Food Bank, adults 55 and over are the fastest rising demographic.

The state cut its share of this supplemental income – the State Supplementary Payment (SSP) — by $77 per month during the last recession, sending seniors who depend on the aid into a financial spiral that landed them at just 90% of the federal poverty level.

Complicating the issue is that recipients of these payments, along with paired supplements from the federal government — called Supplemental Security Income, or SSI — don’t quality for CalFresh, more popularly known as food stamps, making eating even more elusive.

Today, seniors receive a maximum of $889 per month in supplements — nearly $150 less than if the state had adjusted for inflation since 2008, according to the California Budget & Policy Center.

“We are projecting a 150% increase in the number of county residents over the age of 65 by 2025,” says Briscoe. “Obviously, poor diet and poor nutrition will exacerbate health care costs at the same time our system will be stretched way beyond its current capacity due to this demographic shift.”

In the past two years, Alameda County has funded two new kitchens for homebound seniors and those eating at congregate meal sites.

For the past 25 years, Project Angel Food has delivered a daily meal to Los Angeles residents with critical illnesses, including HIV/AIDS to cancer and end stage renal disease.

The Project serves meals made from fresh ingredients to prevent those in poor health from deteriorating further.

In Sacramento, Thomas’s food bank piloted a program with Sutter Health last year to provide healthy food where poor seniors live. The program — introduced at a senior apartment complex that provides dinner only to residents — targeted the missing meals in hopes of improving overall health.

Over six months, food was delivered to the lobby of the HUD-developed site for about 90 older adults. The weekly bag included a variety of food and drinks, with hunger-reducing proteins like meat, nuts, yogurt, and cheese being “by far their favorite,” says Thomas.

Although data on health outcomes for the period is still being assessed, she says there was some clear initial feedback.

“They were much happier,” she says. “They felt the food made a difference in the way they felt.”

After a national research effort, the organization settled on a unique solution — send seniors to three local restaurants instead.

Each month 35 older adults who formerly ate at a Yuba City senior center now receive a book of up to 12 vouchers worth $8 each.

“We were shocked at the numbers of senior hunger.”