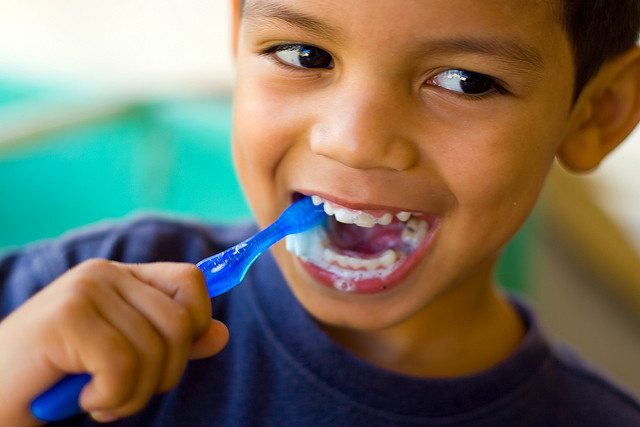 Nearly a quarter of American children age 5 and under suffer from tooth decay, and minority children have untreated cavities at twice the rate of non-Hispanic white children, according to new data from the US Centers for Disease Control and Prevention.

The study comes at a time when many states are ramping up efforts to combat tooth decay among youngsters.

“Dental decay is completely preventable,” says Shelly Gehshan, who heads up Pew Charitable Trusts’ Children’s Dental Campaign. She points to teeth cleaning, sealants, and fluoride treatments as tools that dentists and, increasingly, other health care providers are tapping to shield children against disease.

The data reveal that many of these efforts, however, still fall short as dental caries continue to pose a health challenge for children, particularly Hispanic and black kids, who are even harder hit than their white and Asian counterparts.

More than a third of children under 8 had cavities in primary teeth during 2011 and 2012, the period that was studied. Hispanic and black kids represented upwards of 45 percent of those cases, compared to 35 percent of Asians and 30 percent of whites. One in five of children in this age group didn’t get any treatment at all.

During the elementary-school years, as children shed their baby teeth and permanent ones grow in, Hispanic kids faced the most cavities with 27 percent of cases, while Asian children had the least with just under 18 percent.

Adolescents get roughly as many cavities as the two other groups combined, when nearly 60 percent of teens were diagnosed with dental carries. From 16 to 19 kids across racial lines proved particularly vulnerable, as evidenced by how the disparity gap narrowed from just over 55 percent for whites to slightly more than 60 percent for Hispanics; black and Asians fell somewhere in between. Those numbers are on par with those of their younger siblings—6 to 8 year olds—55 percent of whom also got cavities.

One hedge against cavities is sealants, the study asserts. These thin, plastic coatings, applied to the grooves of the back teeth, where most children’s tooth decay occurs, have the potential to provide inexpensive protection to teeth.

While brushing and flossing are well suited to removing food and plaque from smooth surfaces, these methods tend to be less effective in getting into teeth’s depressions and grooves. Sealants, painted onto the tooth’s enamel, can “seal out” damaging bits of plaque and food by bonding with the depressions and grooves. They harden and fend off acids and other culprits, often lasting several years before needing to be reapplied. While its mostly children and teens who are considered to be candidates, some adults choose to get them, as well.

“Sealants can be applied by a hygienist and cost two-thirds less than a filling—reducing decay by 80 percent,” says Gehshan, who finds there’s been a trend towards using them, particularly in 7 year olds and 8 year olds, whose molars are just starting to grow in.

Over the last decade, states have not only introduced sealants, but also fluoride gels as preventative measures; they’ve also broadened the circle of caregivers who can perform some of these treatments.

The challenge of being on the forefront of dental-care innovations, says Gehshan, is that Medicaid programs can take a while to review and approve them.

“Only 25 states reimbursed for some of these procedures in 2009,” she says, “but that number is up to 47 states this year,” and that includes California. Gehshan went on to say: “The American Dental Association has been slow to come around to the idea [of these innovations], but economics and overwhelming need is driving it.”

With roughly a quarter of California’s school children living below the federal poverty level, according to the LegiSchool project, their lower-income status may qualify them for Denti-Cal, but scores of kids still go untreated. In recent years, upwards of 16 million low-income children in the US went without dental care, according PEW Charitable Trust findings.

Their Children’s Dental Policy initiatives seek to expand the number of professionals who can provide dental care to low-income kids; ensure that Medicaid and other health insurance leads to actual care; expand access to fluoridated water; and broaden programs that provide dental sealants to all children who need them.

Add to that dentists whose appointment books are full; don’t take a patient’s insurance; or are at such a great distance that patients endure hours-long drives—sometimes repeated for extended or additional procedures—and it’s easy to see how frustration can mount.

Gehshan expressed dismay at the “hundreds of thousands” in emergency room costs for those who, having not received care in a timely manner, turn up in the ER, where they get pain medication, and a referral to a dentist.

Says Gehshan, “If they had a dentist, they wouldn’t be in ER in the first place.”