Activism: A Complete Workout for the Aging Body and Brain 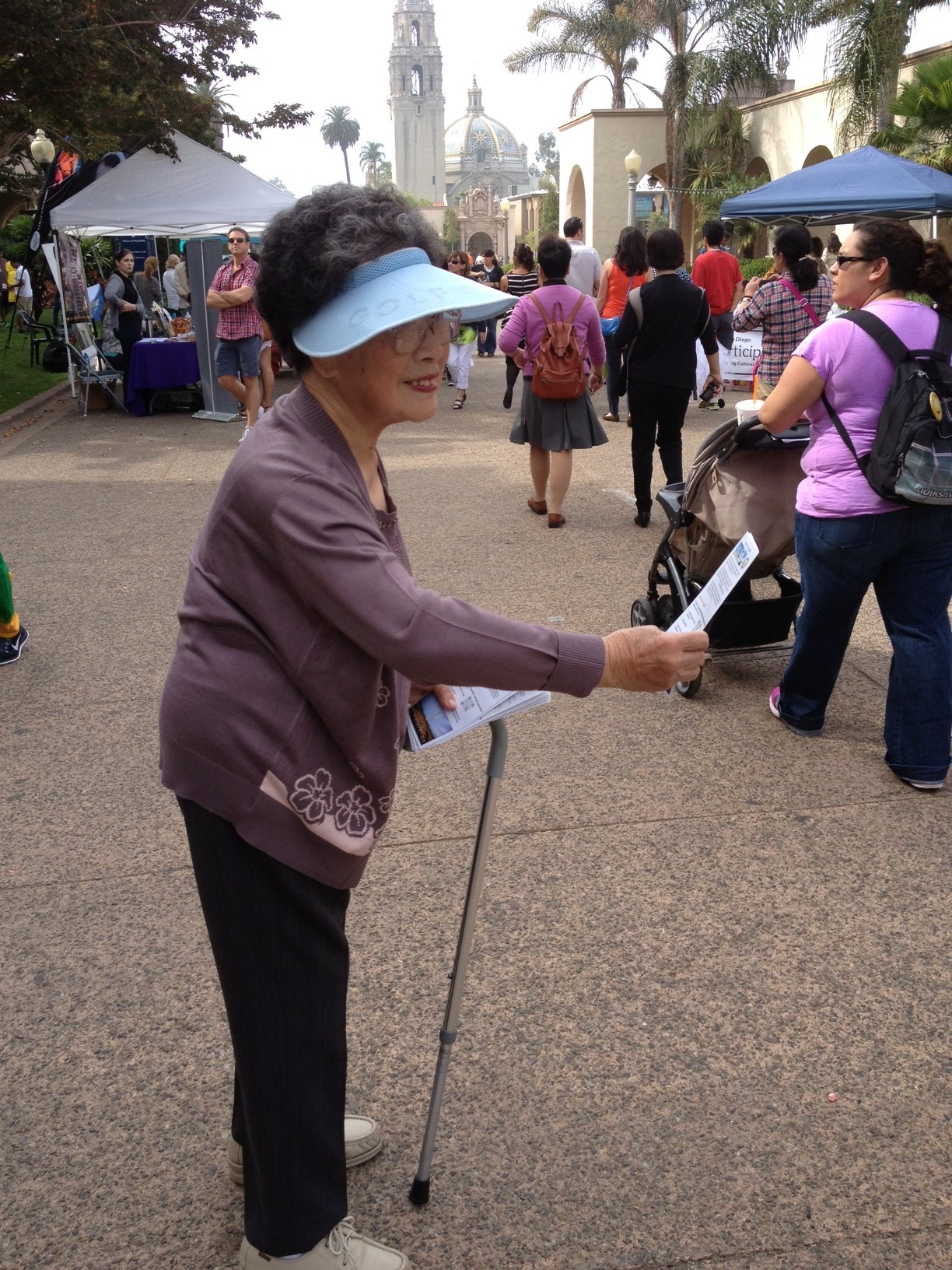 As I walked along El Prado promenade with my daughter before a fall presentation of “Romeo and Juliet” at the Old Globe Theatre, a sweet 91 year-old Taiwanese woman offered me a pamphlet. When I took it, she smiled gratefully, then turned to the other Saturday strollers, kindly offering them the same literature.

I opened the white tri-fold and looked inside.

In horrifying detail, it described allegations of organ harvesting of political prisoners by the Chinese government. Many of them were practitioners of a series of peaceful Tai Chi-like exercises called Falun Dafa, also known as Falun Gong. After looking squeamishly at the pamphlet and its sickening descriptions, I turned back to the woman.

She greeted each passerby with that same smile, as unfailing as the beat of a heart.

Her name was Show-wen Shueh. Born in Taiwan, she once suffered both glaucoma and macular degeneration before practicing Falun Dafa. Then something amazing happened.

“Her glaucoma and macular degeneration disappeared, it just disappeared,” said daughter Shawn White, who stood beside her mother on the promenade. “Before that she was going blind. Doctors said there was no way to stop it or heal it.”

The experience started me thinking about the intersection of aging, activism and health. Everything that I’d learned about aging pointed to the necessity of activity of all kinds – physical exercise, social engagement, mental stimulation – as the key to healthy aging.

White herself recognizes the power of activism.

“The energy is so high for me,” says White, “it’s like having a spiritual bath.”

“Politics is both a physical and mental sport,” says Zak, of Sacramento’s Randle Communications. “As we age, having that memory workout is totally what keeps us sharp. Politics is the best brain fitness.”

And Zak says we need look no further than California’s own governor, who turns 76 next week.

“While some people will call Jerry Brown an anomaly because he’s so sharp at his age, it’s because he works out,” says Zak. “The Jack LaLanne of politics.”

Who make the best activists?

“Believe it or not, it’s primarily older women,” says Zak. “They’re invaluable for a variety of reasons. Beyond the experience factor, I’ve also found that women are incredibly focused and competitive when it comes to public policy issues. They have a unique ability to understand the bigger picture and the drive to help lead and support campaigns in a successful manner.”

Thirty years ago, Julia Hassel co-founded the Sacramento Diocese Black Catholic Ministry, a local chapter of a national movement to foster representation of the three million black Americans within the Catholic church.

At 70, Hassel continues to run the organization, and since 2008 has also helped AARP as its Sacramento-area volunteer coordinator. In addition she directs – and sings soprano for – the local Catholic inter-parish gospel choir.

“One of the reasons I do it is because it keeps me healthy, it keeps me going,” says Hassel. “Most people don’t think I look my age because I’m so active all the time.”

Health studies link social isolation and loneliness to a variety of healthcare ills, including depression, anxiety, hypertension, and sleeplessness.

Conversely, volunteerism and political activism can aid the aging process.

Legendary state Capitol figure John Burton made a name for himself as an old-school legislator: an impatient, temperamental, and colorful curmudgeon – yet one with an astonishing memory for arcane details.

After a lifetime in politics, the current chair of the California Democratic Party reveals his secret to positive aging.

With a history of unkempt hair and dress and a streaming salvo of obscenities, Burton has lived this ideology largely unapologetically.

Yet Burton’s passion for swearing is surpassed only by his unfailing dedication to the downtrodden. And new research on positive attitude reveals that helping others is one of the best ways to stay happy.

At 69, Charles Warner was still active at his Monterey law firm, much of his time spent defending doctors in medical malpractice lawsuits.

After 45 years of practicing law, however, Warner was surprised to be diagnosed with early stage Alzheimer’s disease.

“I had to give up my practice,” says Warner. “But I wasn’t quite content with that so I started writing articles for the Alzheimer’s Association.”

Warner has since become an active Alzheimer’s advocate, speaking frequently at fundraising luncheons and other events.

“The big thing about Alzheimer’s is that so many people know so little about it,” says Warner, describing the early and late stages of the disease. To the uninformed, he adds, “someone who can talk to them in a suit and a tie and not miss any words, it helps them understand the process… they can see that you’re not drooling and staring blankly into space.”

Warner believes that his activism has slowed progression of the disease.

“It helps me because I feel like I’m doing something to help people deal with or combat the disease.”

He says bonding with other humans is the key to healthy aging.

“At the end of the day, you feel tired, you’ve had an active day, and you’ve connected with people,” says Prath. “Helping other people is the best formula for feeling that way. You just feel really good.”

Activism: A Complete Workout for the Aging Body and Brain