A Golden Idea for Senior Women Living Together 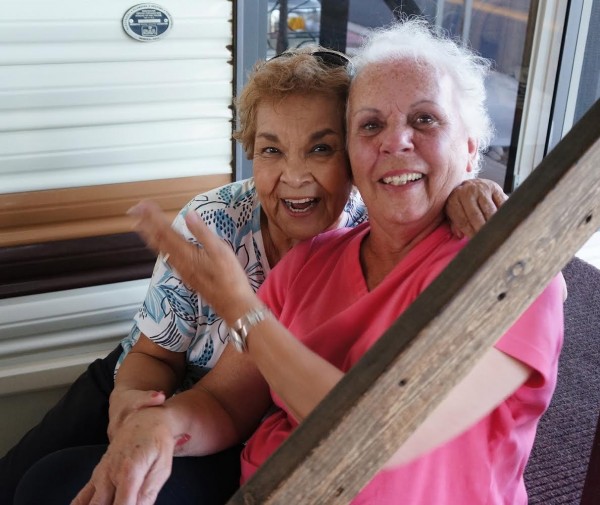 When Bea Arthur and her merry band of aging pranksters graced the airwaves with their “Golden Girls” sitcom a quarter century ago, they paved the way for shared senior housing that’s both fun and affordable.

And like the world-famous Red Hat Society which celebrates aging gracefully and vibrantly, expect the Golden Girls Network shared housing movement to grow rapidly in California.

The concept is simple: pair typically divorced or widowed women in a shared home to address the acute questions of aging, which include high rents and social isolation.

Kathleen Holland, a Golden Girls founder, describes it this way.

“An eclectic group of people coming together that create a dynamic and energetic living situation,” she says. “A sense of humor is important, absolutely, and a willingness to be committed to working through the differences.”

In fact, the Golden Girls are part of a larger movement that is redefining aging with echoes of the Woodstock Generation: peace, love, and communal living.

“During the 70’s we all did that,” says Golden Girls head Bonnie Moore. “It’s a growing phenomena simply because you have so many single older women.”

Going live in June, a new online network pairs women who seek housing with those owning a Golden Girls home.

Yet the network does more than just pair elder female roommates.

Its Home Companion service helps provide a “live-in companion” in exchange for discounted rents of about $300 per month.

And Moore herself is a shared housing evangelist who holds regular telephone seminars, and has authored a book on starting a Golden Girls home. Today, in the midst of a major marketing effort to spread the word, Moore also speaks at seminars and conferences.

The typical Golden Girl is between 50-70, although those as young as 40 can register.

Moore cites a common theme that unites many women.

“I was married and had kids, and I don’t want to live alone.”

Experts say the health effects of social isolation equal those of smoking and include depression, alcoholism, and suicidal thoughts.

After being laid off – and before rooming with Moore – one 55 year-old former mother of five slipped into deep despair.

“They hospitalized her for five days because her health was so bad,” winces Moore.

“The capitalism world has built all these wonderful retirement communities but only the upper echelon – the middle class and above – can afford them if they have a good retirement account” says Moore. “This is the poor man’s version of assisted living.”

Moore herself is a Golden Girls homeowner. With a newly renovated home, she divorced and was left with a five-bedroom, 2,700 square-foot home when the recession hit in 2008. Instead of selling her house, she joined Golden Girls and rents her rooms for $700-$850 a month.

Golden Girls first launched in 2001 to serve the Twin Cities area surrounding Minneapolis. At that time the board chair of the non-profit Golden Girls Homes, Holland has seen the need for shared housing increase, citing in particular high rents like those in California as a “real motivator.”

“The work’s been going on for some time, but the need for it is escalating,” she says.

At 61, Holland now lives in West Hollywood, sharing a two-bedroom apartment with her sister and two other women. In the past three years she’s shared the space with 11 other people – including a handful of men.

Most of the women who sign up for Golden Girls are white, says Moore, but the movement is destined to become multicultural and will reflect the neighborhoods where they’re created. Moore, who is white, has four African-American roommates in her Bowie, Maryland home.

“My sense is that the black community is embracing this more than the white community, because they’re more familiar with communal households,” she says.

“(Latinos) are accustomed to taking care of their elders and living in multigenerational homes,” says Moore.

In Los Angeles County alone – home to 1 in 4 California seniors – there are an estimated two million unoccupied bedrooms.

Other notable shared housing organizations for older adults include “Let’s Share Housing” based in Portland, Oregon, and “Women for Living in Community” in Asheville, North Carolina.

“We don’t promote it as an alternative to assisted living, but there are many people who need help sometimes driving or getting to appointments,” says Holland.

Kathryn Coverston was a well-paid high-tech recruiter in Silicon Valley before a broken relationship and financial meltdown changed her mind about the potential of shared housing.

After moving to northern San Diego County in 2007 to care for her ailing mother, Coverston is today weighing the possibilities of a Golden Girls spinoff – with Moore’s blessing: The Silver Sisters of San Diego.

“It’s very well-received, especially by women 55 and over who don’t have a fallback plan,” says Coverston, 69. “No matter how much we love our kids, we don’t want to live with them. And vice versa.”

At her own Golden Girls house, Moore admits she’s more like a den mother than a homeowner.

“I have a hard time going to bed if I know someone else is out,” she laughs. “It’s just instinctive.”

“All of us live better and more healthily if we have a support system in the community,” agrees Holland. “I think our world needs this. They need it on an environmental, economical and social level.”

A Golden Idea for Senior Women Living Together