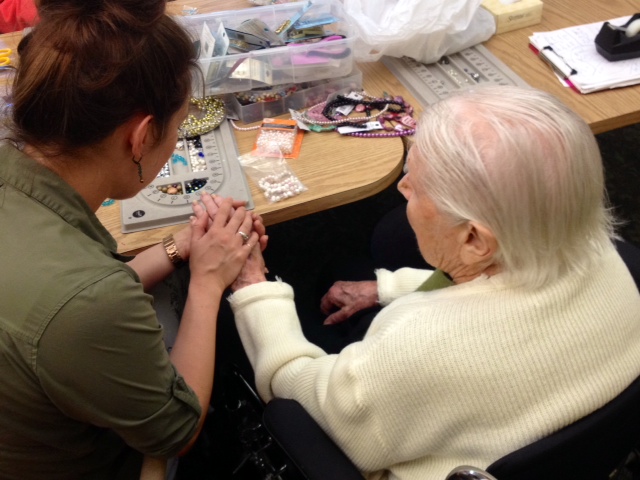 With rates of dementia expected to reach epidemic proportions as an aging American populous lives longer, a Southern California city has formed an impressive coalition of business leaders, educators, foundations and long-term care settings to help train the next generation of caregivers.

Santa Barbara City College is launching two dementia training classes next year with a unique twist: class lectures will be followed immediately – in some cases the next day – with practical application at three local residential care facilities.

“You’ll be in class Tuesday,” says Ann Marie Kopeikin, “and on Wednesday you’ll be in ‘clinical’ (residential care settings) with your instructor working with these patients.”

Director of the college’s vocational nursing program, Kopeikin is launching the two programs at the college with the support of a vast array of high-profile players in this posh Pacific coast city between Los Angeles and San Luis Obispo.

The classes – one an introduction to dementia care, the other focusing on “compassionate care” – target both hired caregivers and family members who want to care for a loved one. The goal: help older adults remain at home and “age in place.”

The combination of lectures followed by immediate practical application is rare enough. But perhaps more surprising – and encouraging – is how the city is joining forces to prepare for the approaching storm.

Launched in early 2013, the effort is the brainchild of retired dermatologist Dr. C.G. “Chuck” Mendelson, who approached the college with the pressing need for dementia-trained caregivers in an area laden with older adults. Why? Most locals remain in beautiful Santa Barbara as they age.

Besides a 14-member steering committee, dozens of other local notables are involved, including Eric Boehm, co-founder of the historical bibliography company ABC-CLIO, and Marianne Kugler, who worked closely with the Clinton administration to establish after-school programs as head of the Charles Stewart Mott Foundation.

Mendelson credits Kopeikin with generating the needed spark to ignite the project. While helping both parents, who suffered from mild cognitive impairment, Kopeikin craved a sabbatical and took it in early 2014 just in time to create the class curricula.

“She’s outstanding,” says Mendelson. “She came along when we thought we couldn’t get anyone interested in my dream.”

Kopeikin says that the classes will emphasize real world experience over theory: understanding different forms of dementia – Alzheimer’s in its most common form – how patients eat and play, the warning signs of stress, and tempering catastrophic reactions like anger.

Hands on practicum will be conducted at three local facilities in Santa Barbara and nearby Goleta.

“This doesn’t happen in the current training model,” says Kopeikin. “It’s just ‘the sage on the stage.’”

Experts like Barbara Gillogly wholeheartedly support the efforts of the Santa Barbara community.

“We need many more of these,” says Gillogly, long-time member of the California Council on Gerontology & Geriatrics and a winner of its Lifetime Achievement Award.

“(Our) classes are taught in an assisted living (or) skilled nursing facility where we have use of a classroom and the permission to work with residents with varying degrees of dementias,” says Gillogly.

She laments negligible training requirements for caregivers when it comes to dementia.

“The person who does your hair and cuts your nails has more education requirements than the person who takes care of your mom,” says Gillogly. “Where are our priorities?”

In California, private home caregivers – those hired through agencies – are not required to have any dementia training, even if they are assisting an Alzheimer’s patient.

“There are no dementia-only training requirements for these people – none,” says Ruth Gay, director of public policy and advocacy for the Alzheimer’s Association of Northern California and northern Nevada. “We would like to see some mandated training, because they’re seeing a lot of people with dementia.”

In residential care facilities, dementia training requirements are modest —
only 6 hours of training within the first month.

“It’s ludicrous to think that in six hours you can train someone to work with all different types of dementia,” says Gillogly.

“It’s just theory,” groans Kopeikin. “There are no hours of clinical required for dementia care. Zero.”

A pending state Senate bill would make minor increases in these dementia requirements.

Meanwhile, experts agree that community colleges are ideally suited to train this new caregiver work force – many of them recent immigrants.

“They have hearts of gold,” says Kopeikin. “And they want to give compassionate care.”

A key supporter of the Santa Barbara classes is the local Arthur N. Rupe Foundation. When Rupe, who lost his wife to Alzheimer’s, heard Kopeikin speak about caregivers and dementia, his foundation asked her to submit a funding proposal. Today, the foundation is paying for all student expenses for the two classes – about $780 per student per class – that includes tuition, uniforms, and background checks.

In fact, foundation staff was surprised at the paucity of caregiver training programs targeting dementia.

“I was really struck on how little was being done,” says Christine Northup, the foundation’s program director.

“The Art of Caring for the Person with Dementia – Memory Care Basics” will explore the impact on families and discuss creative solutions for helping those with dementia – focusing on building a trusted partnership between caregivers and patients.

Kopeikin says a key component to the classes’ success is the small student-teacher ratio: just five-to-one. Classes are limited to 20 students.

The courses will first be offered during the spring 2015 semester, and again in the fall. After that, they will be offered year-round.

Today, the college has a small but growing program in gerontology.

Yet Kopeikin hopes local participation will help steer future growth based on the needs of the Santa Barbara community: educating health administrators, business executives, and workers to create a truly age-friendly city.

“I envision our Santa Barbara community, which offers so many family-oriented activities for our young and growing families, to develop a community that is sensitive, supportive, and inclusive of our older adults.”