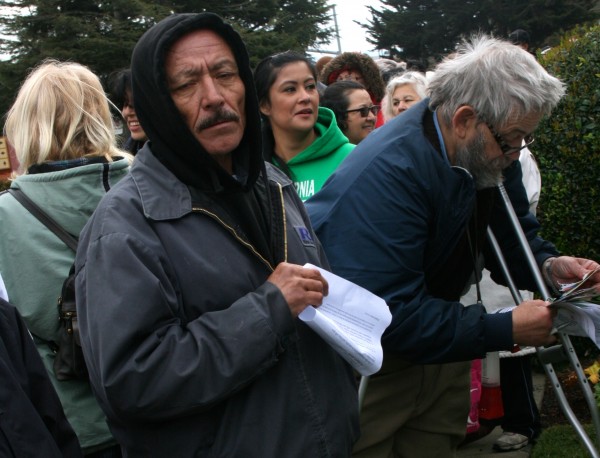 When the first storm of the season hit California’s Central Coast, the rain was no deterrent to the more than 300 people who showed up at Blanco Circle Dental Care in Salinas, seeking free treatment. They starting arriving the night before—some sleeping in cars, some sleeping in tents—waiting out the frigid February downpour in hopes of getting their teeth fixed.

“There is no safety net for dental care in Monterey County,” said Dr. Gary Klugman, DDS, owner of Blanco Circle and organizer of the event. After volunteering at a Dentistry from the Heart event in Santa Rosa last year, Klugman was so touched that he decided to bring the program to Salinas.

Dentistry from the Heart (www.dentistryfromtheheart.org) is a nonprofit organization that partners with dental clinics to provide a day of free dental care to anyone—no questions asked—in communities throughout the nation, and even in several countries around the world. Participants are treated on a first-come, first-served basis, and each gets to chose between a cleaning, filling or extraction.

Since its inception in 2001, Dentistry from the Heart events have treated nearly 85,000 people, said Brian Carlsen, director of the nonprofit organization. “Every couple of years we double in size—we’ll treat at least 35,000 people this year. It’s a geometric progression where one event causes two others to happen. It’s like nothing I’ve seen before.”

He added that California is a record-holder, with 37 partnering dental practices across the state, each holding annual events in areas such as Carlsbad, Turlock, Lodi, Fremont, Truckee, Fresno, Laguna Hills, San Marcos, Pasadena, San Ramon and Ridgecrest. And, now, Salinas.

By 4:30am, people had started lining up outside the practice in damp darkness. By sunrise, the line stretched around the building. Some people leaned on walkers, others pushed baby strollers or held infant carriers. Many were wrapped in blankets.

Inside the dental clinic, 79 volunteers were prepping for the day ahead, including
seven doctors total, from Santa Rosa, Hayward, Monterey, Salinas and the Salinas Valley State Prison in Soledad. Outside, additional volunteers were setting up tables to check people’s blood pressure, teach them the warning signs of stroke and give them information about Cal-Fresh and other social services. A mobile blood bank even pulled up midway through the morning.

“It’s been 20 years since I’ve been to a dentist,” said Mary Simms, a middle-aged woman who rested on her cane in line. “I broke a tooth and was chewing on emory boards just to get the hard edges off.”

A man standing near her, Robert Castillo, recounted how he couldn’t afford the $1,600 fee to fix his abscessed tooth. Instead, he rinsed his mouth with boiling water in hopes of killing the infection and the pain.

“This is an amazing opportunity,” said Julie Anda, another woman in line who lost her dental insurance when she lost her job. “I had a root canal two years ago, but I ran out of money. I still needed a filling.”

For now, the only option for many of these people is emergency care, where patients can receive antibiotics and pain medication—temporary band-aids on a chronic problem that will worsen with time.

“A toothache can progress to an abscess in the brain—people can actually die from that,” said Klugman. In addition to the brain, infection can spread to the blood, soft tissue of the face, jawbone, or other areas of the body. Chronic infection anywhere in the body makes the blood platelets stickier, which increases the risk of heart attack and stroke.

Covered California offers dental plans for children, but not adults. The program is considering offering a dental plan for adults later this year, but the plan would be “supplemental” and so the federal premium assistance will not apply.

When Denti-Cal’s Adult Dental Program is reinstated in May, the California Department of Healthcare Services anticipates that nearly 1.35 million adults will access services during the months of May and June alone. But several key services that were previously covered will not return. Partial dentures will not be covered, nor will deep cleanings (with an exception for pregnant patients). While front root canals will be covered, back root canals will not—leaving extraction as the only option for patients who can’t afford to pay for a root canal on back teeth.

Prefabricated crowns—or “temporary crowns,” as they’re often called—will be covered, but laboratory-processed crowns will not. Because prefabricated crowns only last for a few months to a year, patients will have to come up with the money on their own to find a more permanent fix.

The reality is that fewer than 10 percent of dentists in Monterey County accept Denti-Cal patients anyway, said Dr. Max Cuevas, M.D., CEO of Clinica de Salud del Valle de Salinas, a Federally Qualified Health Center, and the only clinic in the area that provides dental services on a sliding fee scale to low-income people.

“There is a great need for dental care not only in Monterey County, but in the entire state of California—and even the nation,” he added. “We’re not doing a good job of extending dental care to our low-income families.”

Meanwhile, for that day at least, the dozens of volunteers who turned out for Dentistry from the Heart in Salinas were giving it their best effort. In flyers hung at the Salvation Army, the Office of Veteran’s Affairs and Dorothy’s Kitchen (a local soup kitchen), they had promised free treatment for the first 100 patients who showed up. But over 300 people arrived.

“We were running on adrenaline,” said Klugman. “Even when we realized we weren’t going to be able to get through the whole crowd, the volunteers said, ‘Let’s keep working.’”

They had planned to stop seeing patients at 4pm, but they continued until 6pm. By that time, 200 patients had filled out health histories and 125 had been treated. The following week, Klugman and his staff treated the remaining 75.

“It was a really gratifying experience,” said Klugman, who plans to host the event every year. “It really is nice to be separated from the money and just give people what they need.”