Straightening Out the Knot: The Cancer Resource Center of the Desert 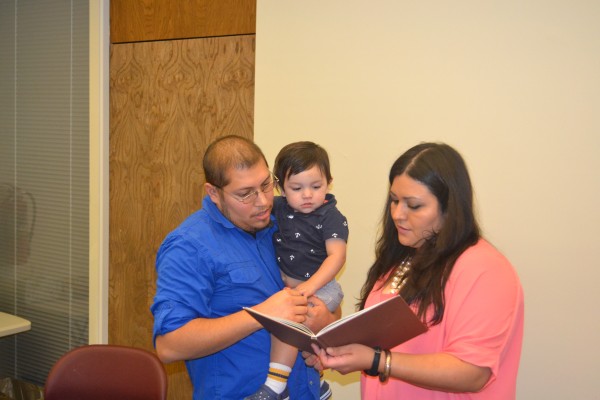 Adrian Tapia and his wife Ana faced more than fear after Adrian was diagnosed with brain cancer in 2013. Between the doctor visits, the scans, surgery and rehabilitation, paperwork had to be filled out. Treatments required a two-hour-plus drive each way back and forth from the Imperial Valley to San Diego.

Friends and family suggested the young couple, who live in Brawley, check out a tiny non-profit in El Centro that might be of some help. So, in January of 2013, shortly after Adrian had surgery to remove the golf ball-sized tumor on his brain, they visited the Cancer Resource Center of the Desert.

“When we got here, it was like a ray of hope,” said Ana Tapia, 29. “For one, it’s in the Valley, so they know exactly where we live and the challenges we have here, living two hours away from an area that has more advantages. Also the emotional part. They knew where we were coming from. They understood.”

The Cancer Resource Center of the Desert is the creation of Diana Peacher, 62, a Valley native and Holtville resident. Peacher once worked for the American Cancer Society, but when the society consolidated its call centers to Northern California, she decided to leave the organization and establish her own Valley-based nonprofit. The center opened in September of 2006, and now employs three navigators (including the founder) seeing 400 patients a year. Peacher estimates they’ve worked with 1,700 people dealing with cancer since opening.

“Anybody diagnosed with cancer who lives in Imperial County is welcomed to come here,” Peacher said, “and of course all of our services are free.”

The center is not a doctor’s office or a clinic, but instead helps assist those struggling with issues associated with a diagnosis of cancer outside of the realm of medical care. Peacher and her staff guide patients through everything from talking with insurance companies and managing finances to accessing resources and knowing what to expect from chemotherapy and radiation treatment. On a basic level, the cancer center helps people simply come to grips with a very serious reality that forever changes the life of not just the patient, but the patient’s family as well.

Helen Palomino has worked for the center since 2008 and is one of the Center’s navigators.

“The family may not fully understand how ill the person is, or what is going to be coming or what is occurring, or why this person is depressed, there’s so many things there,” Palomino said. “It’s like getting a knot that comes through the door, we start to take it apart and straighten it out.”

Adrian Tapia didn’t usually get headaches. That changed while he and Ana, then seven months pregnant with their first child, spent Christmas 2012 with his family in San Diego. The headaches got so bad that Adrian, then 26, felt nauseous and dizzy, and had to spend much of the holiday on his back.

The most terrifying indicator that something was wrong came a few days later back home in Brawley. Adrian attempted to order a pizza, but during the conversation forgot his own phone number.

Life progressed rather quickly from that moment on. The couple eventually spent that New Year’s Eve in the emergency room at Pioneers Memorial Hospital, where a scan showed that Adrian had a tumor on his brain. He had surgery to remove the tumor at Scripps Memorial Hospital in La Jolla on January 6, 2013.

Adrian went to a rehab facility in Encinitas, and Ana gave birth to a healthy baby boy at Pioneers in March (Adrian was able to travel for the birth), but the couple was not out of the woods yet.

In March of this year, Adrian learned that the cancer had returned, this time to his spine, and he’s currently undergoing treatment. He’s been unable to return to his job as an impact teacher at a Community School to El Centro, and Ana’s grant-funded position with the Imperial County Department of Education ran out. Ana had to apply for unemployment and food stamps. The couple is now on Medi-Cal, a stark contrast to the private insurance they previously enjoyed. The complicated sign-up process was another headache, but they turned to the Cancer Resource Center for support.

Advocating on behalf of the patient to government institutions, health insurance companies and other agencies flooded with paperwork and buried in phone trees is a specialty of the center. Even the healthiest of people struggle with the phone calls, emails, letter writing and paperwork involved in simple authorizations or an answer to a question.

“They really helped us sift through the information and what we need to do and get us on track,” Adrian, now 28, said.

The Cancer Resource Center receives referrals from a number of places, including physician offices in the Valley and on the coast, but mostly through word of mouth. The folks who come through the center’s doors, Peacher said, are primarily non-English speaking, mostly and Hispanic and poor.

“People who cannot advocate for themselves,” is how Peacher describes her clients. “They truly are a vulnerable population.”

Peacher didn’t have to look far to understand what patients are going through after a cancer diagnosis. She too is a survivor who was diagnosed with cervical cancer in 1980. Her compassion for those who come through the center’s doors makes her a force in advocating for them.

In addition to its offices and a conference room, the center features a comfortable consultation area. Complete with a couch, the space is more like a small living room with a warmth and intimacy that’s a far cry from the sterile environment of a medical clinic.

Peacher describes the center as running on a shoestring budget, but with some breathing room. They get funding through donations and grants, mostly community donations. She estimates about $50,000 to $60,000 a year comes from a combined fundraising campaign and pledges. The CRCD also features a pair of fundraising events each year: the Desert Lilly flower sale in May and its Camp Out Against Cancer in October, which combine for between $60,000 and $70,000 in revenue.

“We know our county is the poorest county in the state,” Palomino said “However, it’s an extremely generous community.”

Adrian and Ana are still dealing with his illness, and that is unlikely to change. Ana credits the Cancer Resource Center of the Desert for the empowerment the center gave her and Adrian in dealing with this new reality.

“It’s an organization that’s here to help us cope and to help us emotionally and support us,” Ana said. “That was the first time that anybody sat down with us and told us ‘this is what’s going, this is how it’s changing your life.’”

This article was produced as a project for The California Endowment Health Journalism Fellowships, a program of the USC  Annenberg School for Communication and Journalism.

Straightening Out the Knot: The Cancer Resource Center of the Desert