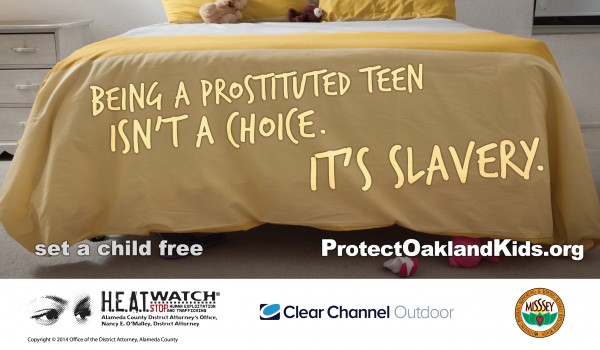 The billboards are impossible to miss along the freeways running through Oakland.

“Being a prostituted teen isn’t a choice. It’s slavery,” reads one.

“Buying a teen for sex is child abuse. Turning a blind eye is neglect,” states another. Both slogans are scrawled over a backdrop of a made bed with two teddy bears against the pillows.

They are the most visible part of the new Protect Oakland Kids campaign, which launched in January as part of National Slavery and Human Trafficking Prevention Month. The campaign aims to bring Oakland and the San Francisco Bay Area’s child sex trafficking problems to water cooler and dinner table discussions around Northern California.

“Somebody asked me, ‘do you really think somebody who’s buying kids for sale is going to stop doing it because they see the billboard?’ And that’s not the point,” said Teresa Drenick, Assistant District Attorney for Alameda County. “There are so many people in our community who are unaware that kids are trafficked in our own backyard.”

Statistics from the Alameda County District Attorney’s Office include:

A number of theories seek to explain why Oakland and the Bay Area are a hot spot of sex and human trafficking, Drenick said. Most prominently, the region serves as a major transportation hub that allows traffickers to get in and out quickly and easily, she said.

Second, intense poverty — especially in the East Bay — contributes greatly to the problem. Most victims of sex trafficking are girls who come from shattered homes, have suffered abuse and worked their way through the foster and criminal justice systems, Drenick said.

“There’s also an element of criminality here in the East Bay that is taking advantage of this industry,” Drenick said.

While many girls are prostituted on the street, Drenick said, pimps advertise a significant number of them online and arrange their meetings with customers.

The billboard campaign is a partnership between the Alameda County District Attorney’s Office; MISSSEY, a community-based group focused on helping victims of sex trafficking; and Clear Channel officials, who operate the billboards and donated the space.

All billboards were up for about a month, Drenick said. Some have come down, and others will stay a while longer, as decided by Clear Channel, she said.

Along with billboards in English, Spanish and Chinese, the campaign has different posters in bus shelters around Oakland, targeted at sex-trafficked teens seeking a way out.

“When I was bought and sold, all I wanted was to get high. Now I’m getting my high school diploma,” reads one.

“When I was in the life, I thought I was alone. Then I found help from other people like me,” says another.

Those posters, health leaders said, are part of a greater, long-term effort to reach kids who are victims of sex trafficking and help them escape, Drenick said. The messages come straight from survivors of sex trafficking (although the accompanying photos are not of sex-trafficking victims).

Victims might not call for help right away, Drenick said. But they may jot the number down for later. Or a friend might call to help a friend, or a mother to help her daughter.

Amba Johnson, director of Alameda County’s DreamCatcher Emergency Youth Shelter and Support Center, agreed that the efforts to reach child sex trafficking victims will take longer to find their target audience than those aimed at adults. But, she said, both conversations are crucial.

“We have not seen anyone come in here and say I saw the billboard I need help. I don’t think it works like that,” Johnson said. “It’s the beginning. It’s a very first and very powerful step to getting the information to a large population of victims, and a large consumer population that needs to make different decisions.”

Johnson said she hopes that, along with making Bay Area residents aware of the problem, the billboards are a deterrent for men in the community who might buy underage girls for sex. Studies show that about 40 percent of those men likely would act differently if they had more “cognitive information” on what they were doing, she said.

In addition, she said, she hopes those who drive around town and notice a young girl selling sex on a street corner will stop and call 911.

“When you drive by and you don’t pick up the phone, then there’s a way that you’re complicity sending a message to traffickers that, ‘this is not a problem to me,’” Johnson said.

Across the Bay, Minouche Kandel, director of women’s policy at the San Francisco Department on the Status of Women, said she’s heard many comments from friends and acquaintances after they saw the Oakland billboards. She likes that the billboards focus on sexually exploited kids as victims of child abuse, not law breakers.

“The people exploiting children are potentially committing crimes. The children we don’t want treated as criminals,” she said.

Bruce Qualls, vice president of Real Estate and Government Affairs for Clear Channel Outdoor, said in a statement that his company donated the space to help “prevent the next child from being taken.”

We believe these messages could be pivotal in rescuing victims and bringing their traffickers to justice,” Qualls said.