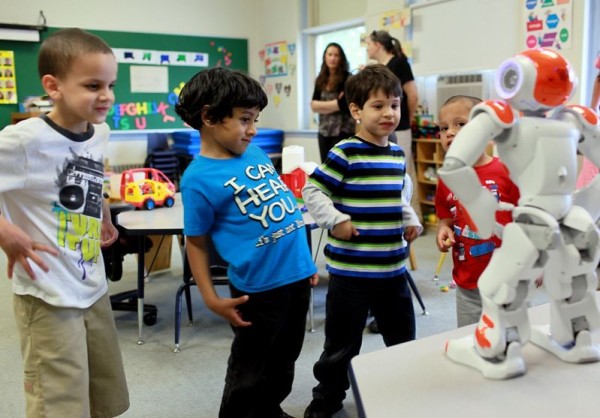 An 8-year-old boy with autism ran up to a booth where a small robot named Nao sat on a display table at a technology conference a few years ago. Nao was “looking” around. When the child touched the robot’s shiny white and blue body, its sensors engaged, and it turned its head and began to ask the boy questions in a pleasant, computerized voice.

A short distance away, the boy’s parents witnessed the exchange. It was the first time the child had ventured out of his shell without being coaxed, and his mother was so moved that she began to cry, said Alia Pyros, special education marketing & communications manager at the Paris, France-based manufacturer, Aldebaran Robotics.

“This really started to open our eyes to the power of Nao in connecting with kids,” Pyros said. That understanding, along with encouraging research at such schools as Notre Dame and Vanderbilt in the U.S., as well as at universities in Malaysia and The Netherlands, served as an impetus for the company’s Special Education/Autism Initiative, she said.

“Children are drawn in by the cute, interactive side of Nao but leave with the educational lessons and skills he shares,” said Pyros.

Autism spectrum disorder rates climbed nearly 30 percent between 2008 and 2010 and more than doubled since the turn of the century, according to a new study from the U.S. Centers for Disease Control and Prevention. The condition is believed to affect one in every 68 children—up from one in 88 kids—who are 8 and older. Symptoms include difficultly with communication, social interaction and a range of repetitive behaviors.

California recently joined the nation in recognizing April as Autism Awareness Month, and a number of autism-related bills are currently pending in the Legislature.

Nao doesn’t yet have much of a track record in this state, where clusters of autism have been identified in the Los Angeles and San Francisco areas, according to Scientific American. But educators on the East Coast are starting to collect anecdotal information on the robot’s forays into the classroom.

Leslie Schecht serves as director of technology for New York City’s special education sector, which serves 23,000 students throughout 60 schools and 350 sites. She ordered four NAOs in August of last year, two for daily use and two as back ups, at a cost of about $10,000 per robot, including programming and software.

She became aware of the product last year when maker Aldebaran approached her, showing several different presentations. Now the robots are being used in two schools, one with 2nd and 3rd graders, and the other with 4-5th graders, all primarily on the autism spectrum, Schecht said.

“The first thing we did was spend several months working with teachers prior to introducing Nao to students,” she recalled.

Administrators and teachers can customize the difficulty of an educational application through an online interface, which involves clicking or unclicking boxes to turn certain functions on or off, while providing a range of ways to interact with Nao, including touch, images and verbal cues to suit the needs of children with varying levels of ability. Teachers also use the ASK NAO Autism Solution system to create profiles for each student, along with Individualized Education Programs (IEP), to incorporate what motivates the child, as well as to establish learning goals.

“We also did programming that was more specific to our students, making them more physical and interactive. We programmed it to say, “Mm hmm, if the child was reading to it. ‘Whoo hoo, good job!’ if a child gets a question right, and “Okay, you got that wrong, let’s try it again,” when the answer is not correct. Their Naos are programmed to give a child extra time to respond to its questions. Nonverbally, the Nao is known to throw up a universally understood “high five.”

“Children are fascinated with the technology,” Schecht finds. “The robot’s eyes light up; it moves and dances.” The children even named their robots:  The orange and white one became Sonia, and the blue and white became Kevin. “If you mix them up the names, the kids will correct you,” the administrator said, noting that the technology seems to bring out human emotion.

“Some who were completely nonverbal have started to say some words, mimicking the robot, and some who were initially afraid of it, can be seen walking down the hall holding its hand. It’s sweet,” she said. “The kids are showing empathy and real feelings. They know not to hit [Kevin or Sonia]; they think when they touch the robot, it feels them. They hug the robot goodbye.”

Like any technology, it has its glitches. Some days the robot boots slowly, or a spinning wheel on the teacher’s computer, which is used to program it, suggests that it’s bogged down processing information. “We’re ironing out a lot of programming issues and really starting to pave the way for the future,” said Schect, who added, “This is an ongoing project for us.”

Teacher Jessica Bahar, who works in Schect’s district, says Sonia has been a real hit in her class. The robot makes an appearance for a group lesson four times a week, a half hour each time.

“It used to be that different games reached different kids, but I couldn’t hold the whole group. One kid would get a turn, and the others would look off in space. They could be in this classroom and not know each other exists. But when Sonia is here all six students are completely engaged, and they wait more patiently for their turn.

With the two children in her class who have minimal conversational skills, in the past Bahar might say, “What’s your name?” and the child would mimic her, repeating “What’s your name.” But with the robot, “they’ll walk over and say, ‘Hi Sonia,’ in completely spontaneous language that is completely appropriate. They see Sonia as a friend and want to sit next to her.”

For the less verbal children, responses help Bahar gauge what they actually know. In the Touch My head Game, for instance, if they actually touch Sonia’s head, the teacher is clear they get the lesson. Bahar programs the robot to do or say things remotely from her own computer, and the list of lessons that the children will do during that time will show up on a 72-inch smart screen in the classroom. That way students know the order of the lessons, and even if one they like is coming much later, they seem to exhibit patience, she said.

To reward the children for correct answers, Bahar has an array of songs and dances she can program Sonia to do on the spot. One of them is the Michael Jackson song “Thriller,” which is a big hit with Bahar’s students.  “They love it and copy [Sonia] by jumping up and doing the moves.”