A Passage to India – Life, Death and the Healing Power of Ritual 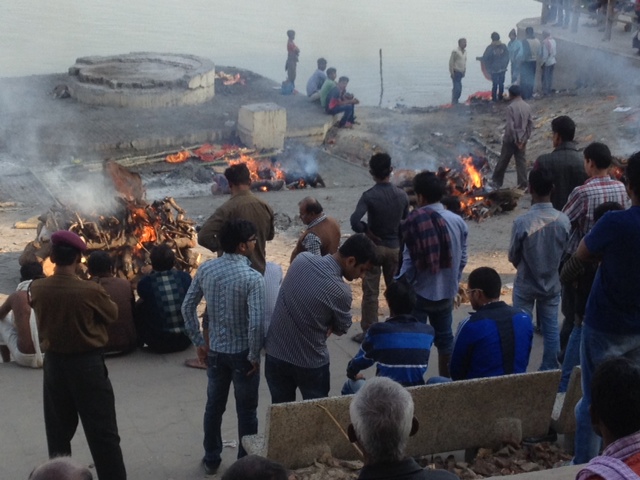 Matru peered out from our perch high above the Ganges and looked down at the spectacle below – five separate fires burning near the river’s edge. His family had overseen this site for generations, and over five decades he’d seen this ritual repeated thousands of times.

I looked at the burning corpses below, and asked him if he was afraid of dying.

“Of course not,” he laughed, taking another bite of betel nut, a stimulant that darkened his teeth blood red after decades of chewing. He pointed heavenward. “Only god knows when that will happen.”

India has historically served as a haven for travelers seeking an answer to the deep mysteries of life and death. But here, within this country of over one billion, the experience is intensified. Visitors from across the globe choose Varanasi for its “burning ghats,” the steps leading down to the sacred Ganges where families bring bodies of the recently dead to be burned – over 500 a day.

Death rituals around the world are spectacularly varied and include animal sacrifice, vodka toasts, and burying gifts with the deceased. Highly personal, for the dead these rituals smooth the transition to the afterlife. For the living, they help friends and families embrace the grieving process – and death itself.

Yet Americans – obsessed with youth, plastic surgery, and eternal life – are often afraid to discuss the taboo topic.

And most are unaware of a growing trend that’s being called a powerful and intimate healing balm: home funerals.

Boucher says home ceremonies are unique opportunities to reconnect with the dying process, offering deeper closure and greater reverence for life itself. For nearly three decades, she has used her talents as an art director for film and stage to create home services that become powerfully moving experiences to families mourning the recent loss of a loved one.

“When families can be involved, whether it’s dressing, or bathing or putting on her necklace she loved so much – they really help with the grieving process in letting go,” she says.

She says South America families have always taken care of their dead and can’t imagine it being turned over to professionals.

“(Buddhists) know something very powerful is happening in those three days after death,” says Bareham, “and you can’t do that if they’re bagged and refrigerated.”

Finally, she cites a woman whose baby was stillborn, and how the wrenching grief of the first day at home holding the boy gave way to healing and acceptance by day two.

“Because she got to complete it, she got to release it,” says Bareham.

Because soldiers fighting in America’s bloodiest war often had to be shipped hundreds or thousands of miles home, morticians set up shop right at battlefield’s edge. Often, these business owners came from other professions.

“What were once the cabinet maker or furniture maker became the funeral parlor director,” says Boucher.

When President Lincoln was assassinated, his body traveled the country — the magic of embalming on display for all America to see, and emulate.

Since then, death has become big business; the average funeral cost is nearly $8,000.

“Death has been taken away by professionals,” says Bareham.

While all states allow home funerals, nine still require that a funeral parlor be involved in some capacity – if only to certify the death.

Home funerals have become increasingly popular over the past decade, says Joshua Slocum, executive director of the Funeral Consumers Alliance, a trend he expects to accelerate. Slocum is also co-author of the book “Final Rights: Reclaiming the American Way of Death.”

Nationwide, there are probably a few hundred home death care guides, says Lee Webster of the National Home Funeral Alliance. Yet because these guides are non-licensed advisors, the number could be much higher when tallying ethnic communities that are historically both private and protective.

Boucher says the emotional trajectory of families deciding on a home funeral is often the same: children who have cared intimately for a parent are far more likely to ask for a home experience, while those removed from the dying process prefer traditional services.

“If you’re caring for those people you love in your home and don’t push them away in some institution, the natural flow of things is to care for them after they passed,” says Boucher. “And now we’ve pushed everything away. We’re getting further and further from the elderly, and from death.”

In the end, she asserts, the home funeral experience proves positive for everyone.

“I’ve never had a family regret it,” says Boucher. “They have all said ‘It was the most incredible experience I’ve had.’”

Boucher is now in post-production on her documentary In the Parlor: The Final Goodbye, which follows three families through the home funeral process – one woman even plans her own service while still alive.

Aimed at a PBS audience, Boucher hopes the hour-long film will go a long way towards overcoming our unnatural fear of death.

For supporters of home funerals worldwide who have experienced the intimacy of these services, death may be the ultimate healer.

“It’s a very sacred time,” says Boucher, “These families feel it and know it when they’re in it.”

A Passage to India – Life, Death and the Healing Power of Ritual