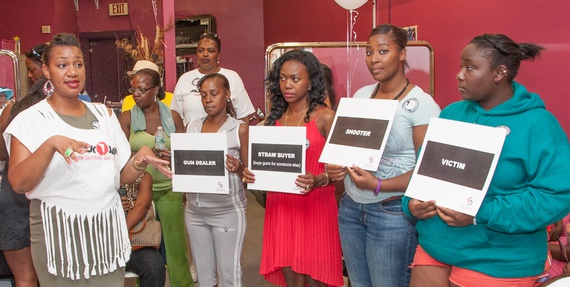 Ladies Involved in Putting a Stop to Inner-City Killing wants to halt the cycle of violence by addressing women’s roles in securing guns for boyfriends, husbands and others who can’t legally purchase them themselves.

Launched last September by the Boston-based coalition Citizens for Safety (CFS) with funding from the U.S. Department of Justice and some private foundations, Ladies Involved in Putting a Stop to Inner-City Killing (or LIPSTICK) is now gearing up to expand to other states and debuted in the Bay Area in late November.

“This made all the sense in the world to me,” said Speier, stressing that it’s not a gun rights issue, it’s about preventing women from being duped into becoming straw purchasers. Straw purchasers buy guns for others who can’t lawfully purchase guns themselves, a federal felony that can carry a 10-year sentence, depending on how many guns were bought and what happens to them. Some women are convinced by boyfriends or husbands that they need a gun to protect the family. Or they buy a gun as a favor for a friend, not knowing what it will be used for, said David Chipman a retired 25-year special agent with the Bureau of Alcohol, Tobacco, Firearms and Explosives.

A 2007 report out of the University of Pennsylvania to the National Institute of Justice reported that while women purchase only 12 to 16 percent of guns used in crime, if they did purchase a gun, it was 57 percent more likely to be used in crime than if a man purchased it.

At workshops LIPSTICK facilitators explain the so-called “iron pipeline,” tracing guns back from the victim to the shooter to the straw purchaser to the gun dealer.

They also ask participants to sign a pledge that they will not allow themselves to be used to take another person’s life or to buy, hide or hold guns for someone else. And they train women how to become activists, presenting what they’ve learned to their peers and organizations.

Many women in LIPSTICK have lost a loved one to homicide.

Ruth Rollins, a domestic violence advocate at Elizabeth Stone House in Boston, lost her 21-year-old son to gun violence in 2007. She and a team, who call themselves LIPSTICK Ladies, are facilitators, talking woman-to-woman in workshops at beauty salons, churches, schools and shelters about straw purchasing and other forms of gun trafficking.

But as the campaign expands, LIPSTICK Ladies will connect directly with gun dealers, encouraging them to adopt a ten-point set of policies to prevent guns from falling into the wrong hands, Robinson said. Those policies were created by the organization Mayors Against Illegal Guns and Walmart, the largest retailer of firearms in the nation. They include video recording of sales, background checks for employees and training employees to spot illegal purchasers.

Robinson decided to start working on preventing gun violence after the Columbine High School massacre in 1999. “I thought, ‘I have to do something to protect my kid and everyone else’s kid,’” she said.

She got involved in the Million Mom March, traveled the country talking to survivors of gun violence and leaders and looked for some common ground in the polarizing debate over guns.

Keeping guns out of the hands of the mentally ill, juveniles and felons was something everyone could agree on. Robinson founded CFS, a coalition to stop gun trafficking, in 2008 which started a campaign called “Where did the gun come from?” It urged people to ask that question after every shooting, to write it in chalk at the crime scene, to raise the question to media, to tell friends and tweet about it.

“Very few people, law enforcement included, knew the answer,” Robinson said. “We shouldn’t have to guess; lives are at stake.”

CFS worked with the Bureau of Alcohol, Tobacco, Firearms and Explosives and the Boston Police Department to shed some light on common sources of trafficked guns.

Robinson also recruited Rollins and Kim Odom, a pastor at True Vine Church in Boston, whose 13-year-old son Steven was gunned down on a street near his house. The crime was never solved.

“In the aftermath of losing my son Steven I was devastated and wanting to understand the root cause of what seems to be an epidemic. We didn’t know who did it or why and that’s important, you want those answers,” Odom said.

After Steven’s death Odom couldn’t go back to her job in the insurance industry. Instead, she went to work for the Boston Public Health Commission’s Division of Violence Prevention as a family support coordinator. Her work with other families and with LIPSTICK has helped her channel her pain and anger into working for change, she said.

Robinson invited Odom to a “Traffick Jam” workshop where she showed footage of a young woman testifying before Congress about her experience as a straw purchaser.

“When I saw that my heart sank and I said ‘Oh my god, is that how it happens?’ said Odom. She figured if she was naïve about it, there must be others and that information would be useful for teaching one another, women of all ages.

Some women are blatantly involved in crime, but there are a significant number of women who don’t want to know what is happening with the guns they are purchasing, Rollins said. Domestic violence also plays a big part in straw purchases. “I see first hand how women are coerced into gun violence,” she said.

They may also be unaware of what that gun may be used for, or needing money to feed their children or a drug addiction, Chipman said.

“The women are not blameless,” he said. “But I do think there are women living as hostages.” But, he adds, “This is a line that shouldn’t be crossed no matter what your circumstance is.”

Rollins believes enlisting mothers and grandmothers is key. She recalls a workshop LIPSTICK held in a beauty salon in July.

“A lot of older women walked away saying, ‘there’s no way I’m going to condone him bringing guns into my house. I’m going home to tear that room apart,’” Rollins said.

In addition to their desire to stem the tide of gun violence, working with LIPSTICK has provided Rollins, Odom, and many others in the campaign who have lost loved ones to gun violence, some healing.

“It’s our way of saying that their lives mattered,” Odom said. “I’m determined that Steven’s life does not end on the sidewalk.”