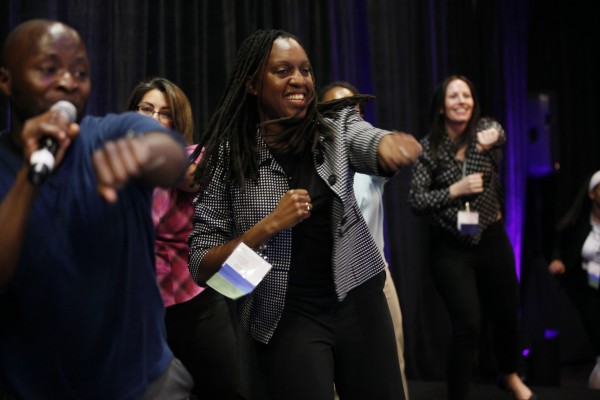 Many of us remember a time when we couldn’t wait for the recess bell so we could bolt out the classroom and play. The late Antronette “Toni” Yancey sagely tapped this sense of nostalgia to reignite people’s enthusiasm for exercise. With Instant Recess®, she lit a fire that continues to gain force as it moves through through businesses, universities, communities and beyond. A self-proclaimed physician poet and active-ist, Yancey died earlier this year at 55 of lung cancer (she was a non-smoker).

At the University of California at Los Angeles (UCLA), where Yancey was a professor, 10 health department groups take daily Bruin Breaks — brief, easy workouts — where they crank up the music and shake a leg; an Ohio church created the “Jesus Shuffle” line dance; a professional San Diego baseball team offers bursts of exercise for kid fans; and a manufacturer of outdoor gear created a “Recess is Back” initiative–for which Yancey served as a consultant—that’s spread to hundreds of other companies.

The seeds of Instant Recess were sown roughly 20 years ago when Yancey was director of public health in Richmond, VA, says her life partner Darlene Edgely. “After her [medical school] residency, she started working for a residential program in New York where the population was all girls. A lot of them lacked role models, and had body-image issues,” she says. “Toni was hoping to change the culture and empower the girls.” As a young doctor, Yancey focused on healing whole communities, rather than one person at a time, quickly gleaning that the expense and hassle of going to a gym or a track, where one might need special gear or a shower afterwards, posed such a hurdle that many simply avoided it.

“One of her unique contributions was coming up with ways to address and prevent obesity that were simple, practical things you could do everyday,” says Michelle Levander, director of USC-Annenberg’s California Endowment Health Journalism Fellowships, for which Yancey served as a board member and continued to contribute ideas to improve journalists’ understanding of health even after she became ill with cancer.

Fitness Has to Fit

Levander recalls first meeting Yancey during a training session for ethnic media. “She would have people who weren’t particularly slim lead Instant Recess sessions, and get everybody moving… Some of the people in the room were really heavy, like 300 pounds. But when Toni said, ‘Everybody get up,’ and started the music, it was fascinating to see people who clearly looked like they weren’t exercising regularly, participate with a big smile on their faces.” Later when Yancey asked the journalists why people didn’t exercise, one suggested that it was out of ignorance and a need for more information, Levander remembered. “Toni said: Really? You think people don’t know exercise is good for them? We have to find a way to make exercise fun, communal, and fit into their busy day.”

Her book, Instant Recess: Building a Fit Nation 10 Minutes at a Time, sought to make activity something you could simply jump up and do. “Unlike the negative feeling people often connect with exercise,” she once said, “[recess] captures the idea of fun and stress relief and exuberance, linking that with physical activity.” As a kid, she pointed out, “even if you weren’t an athlete, you went out and ran around.” A former model and college basketball player, Yancey, who was 6’2, also held a Masters of Public Health from the University of California at Los Angeles (UCLA), where she was a professor and once served as director of chronic disease prevention and health promotion for Los Angeles County.

She and Melicia Whitt-Glover, Ph.D., a colleague and friend who runs Gramercy Research Group in Winston-Salem, NC, worked together to spread the word that even if you aren’t a hardcore athlete, you can still reap the benefits of exercise, including weight control, improved mood, better brain functioning and heightened morale. Co-workers who do exercise breaks en masse have reported they find it easier to cooperate with one another.

Yancey and Whitt-Glover successfully sought funding for research from elementary to high school, and determined that establishing a new exercise habit could be a confidence builder. “We divided the country; I had the east coast and she was out west,” Whitt-Glover recalls, with each seeking to meet people where they were. “People like to move in groups,” she says. From American Indians to Latinos to African-Americans, the chance to dance to culturally infused music can win over the holdouts. As researchers, however, the two faced challenges finding “control” groups, because once they introduced the concept of Instant Recess, which was so plug and play, few wanted to be in the non-exercise group that would be the basis for comparison.

Yancey’s advocacy for bursts of exercise also bodes well for lifestyle factors that lead to chronic illnesses, which cause seven out of every 10 deaths, according to the Centers for Disease Control (CDC). That same 2012 CDC report suggested that there’d been a 97 percent increase in premiums for employer-sponsored health coverage since 2002. In a 2012 TEDx Talk, Yancey asserted: “What’s good for the waistline is good for the bottom line.” She also suggested that the office chair, filled with sedentary “mouse potatoes,” was killing more people than the electric chair ever did.

Yancey’s ideas, which date back two decades, made her a prime candidate for the board of directors of the Partnership for a Healthier American (which recently dedicated a room in her honor). The Partnership is the nonprofit that guided first lady Michelle Obama’s Let’s Move! campaign, targeting childhood obesity. Yancey’s efforts also earned her a 2012 Pioneering Innovation Award from the CDC, as well as a 5-year, $20 million grant to expand Instant Recess throughout the country. Denise Woods, Ph.D., was once one of Yancey’s students and mentees at UCLA’s Fielding School of Public Health doctorate program.

Woods later went on to collaborate with Yancey on a number of projects. Together they introduced Instant Recess to multiple sectors around the country; helped to raise awareness around nutrition in underserved communities; and headed up the UCLA Healthy-by-Default REACH Project, as a part of the CDC grant. “We are currently working with 14 communities around the country…getting them to adopt [healthy] strategies so much so that they become engrained into everyday life,” says Woods. Funding and the timeline for the grant were recently scaled back to two years, and its future is to be determined.

Yancey touched so many lives that since she’s been gone, there have been three memorial services to honor her: The first to say goodbye on May 3; a second virtual memorial on May 7, where hundreds of groups around the country did a 10-minute Instant Recess at the same time and posted pictures on social media; and finally a third memorial symposium on November 1, 2013, on what would have been Yancey’s 56th birthday. The latter brought together more than 100 notable public health colleagues, along with poet friends from around the country–all converging on UCLA to discuss Yancey’s impact on public health, perform spoken word poetry, and engage in an Instant Recess activity led by Woods.

Edgley says that the Instant Recess concept was so deceptively simple that some believed it couldn’t be that easy to get people up and inching towards better health. “They told her it would never work. She had to fight to get where she was, and now it’s taking off. As Ghandi said, ‘First they ignore you, then they laugh at you, then they fight you and then you win.’”

Though she’s gone, Yancey’s winning streak continues. Her innovative insights into fitness have been spread far and wide, and people are taking the ball and running with it. Says Whitt-Glover, “Toni made the healthy choice the easy choice… She started with that end in mind, and threw down the gauntlet for people doing public health research, forcing them to think about the people they’re serving.”

There’s no wrong way to do it, as long as you get moving for a brisk 10 minutes. Remember, the more the merrier, and keep it playful: