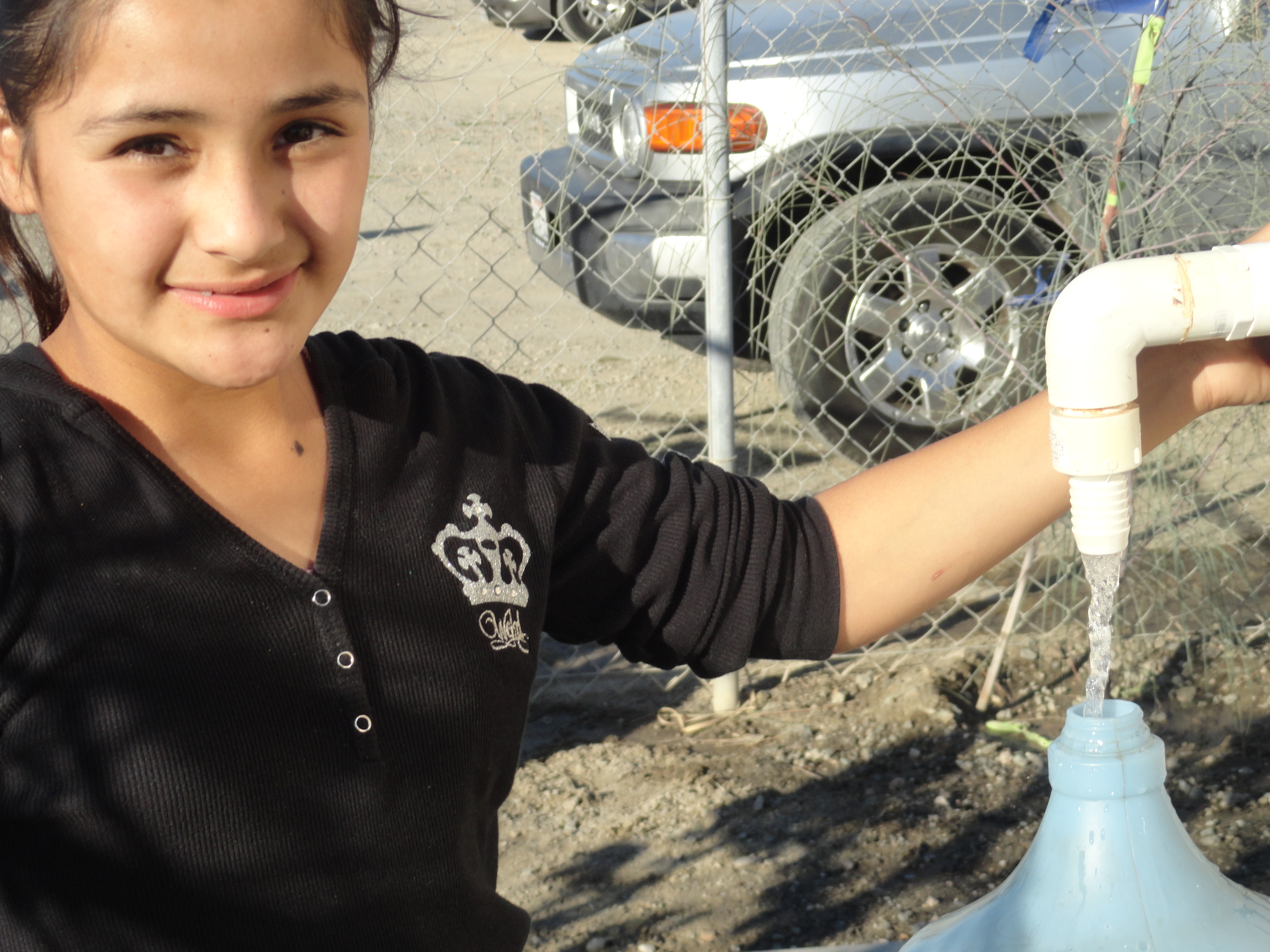 Guadalupe Mendez and her husband, both farmworkers, live in a dirt-road trailer park with their three kids. Saint Anthony’s trailer park sits in rural Mecca, California, 30 miles east of lush Palm Springs. But they might as well be in the middle of nowhere – because the water and sewer pipes that serve the rest of the Coachella Valley stop five miles short of Saint Anthony’s. As a result, their sewage is piped into a waste lagoon near the park. And the water comes from a 40-year-old well – water that is tainted with a carcinogenic toxin: naturally-occurring arsenic.

A 1999 study by the National Academy of Sciences linked arsenic in drinking water to bladder, lung kidney, liver and skin cancer. The study also said arsenic harms the nervous system, and the heart and can cause birth defects and reproductive problems.

Fortunately, a local non-profit activist group called Pueblo Unido bought the park in 2010 and later installed a water filtration system to remove the arsenic. Guadalupe Mendez is grateful to have clean water for her family. “It was nasty. I used to go out and buy water – we had to live on 2 gallons a week. We would always run out, especially in the summer. I like the kids to drink a lot of water so I constantly had to go get more.”

Farmworker families like the Mendez’ scrape by on $800 to $1000 a month. So having to spend up to $80 a month on bottled water is a significant burden. Pueblo Unido makes the treated water available for free.

“The results were too high, so it was unhealthy for families to continue drinking the water. They bought bottled water which is highly expensive, plus the cost of the gas, it makes it very expensive to have water in this area,” says Sergio Carranza, Executive Director of the Pueblo Unido Development Corporation.

Six hundred people live in 90 trailers at Saint Anthony’s, including about 200 children. But the filtration system only produces 1,500 gallons a day and it’s only available from a tap on the filtration system’s shed. Each family must fill a 5-gallon tank and carry it home, where it is used solely for cooking and drinking. They still bathe and wash their dishes and clothes in the well water. The World Health Organization says that absorption of arsenic through the skin in minimal, so the practice does not pose a health risk.

Pueblo Unido estimates that 45,000-60,000 people live in small trailer parks with no access to conventional water or sewage. And the population swells by another 15,000-20,000 migrant farmworkers during the grape harvest from May-July. Pueblo Unido would like to install similar filtration systems, or at least filters that attach to each person’s tap, at the some of the hundreds of small trailer parks that dot the farmlands of the eastern Coachella Valley.

The National Resources Defense Council used the data from the National Academy of Science’s report to assess the cancer risk for people who drink 2 liters of arsenic-tainted water per day over 20 years. They found that arsenic levels of 25 parts per billion (ppb) leads to a 1 in 200 chance of getting cancer. At 50 ppb, the risk jumps to 1 in 100. The water at Saint Anthony’s well has tested as high as 30 ppb. The filtration system installed by Pueblo Unido has reduced the arsenic to undetectable levels.

The reverse osmosis filtration system costs about $36,000, plus $5,000 a year in maintenance, which is done by a certified inspector who tests the water once a month and reports it to the county and state water agencies and health departments.

“We did research on other technologies to remove arsenic,” says Carranza. We contemplated ion exchange treatment and also water absorption, which uses media to absorb undesirable things like arsenic. Our system contains 3 filtering devices which include carbon filters and a big membrane that actually removes the arsenic.”

Carranza is now working to replace the existing well altogether, because it is small and on the verge of collapse. The CDPH gave Pueblo Unido a $250,000 grant to build a new secondary well, which is under construction now. The CDPH is reviewing Pueblo Unido’s application for another $1.2 million to build a much larger primary well, which will have the filtration system integrated into the design. By contrast, Carranza says it would cost the Coachella Valley Water District $22 million to connect water and sewer pipes to Saint Anthony’s.