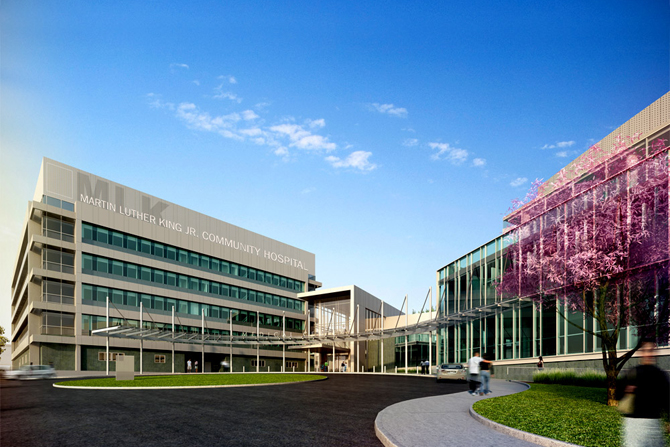 In 1966, one year after the Watts Riots illuminated the scarcity of health care services in South Los Angeles, 25-year-old Leonard Deadwyler lay mortally wounded in his car, shot by a police officer who insisted Deadwyler was drunk instead of what he was: A husband rushing his pregnant wife to a hospital some 20 miles away.

The hospital became an icon and a godsend to the community. Yet in 2007, the county shut down King/Drew after years of gross mismanagement, preventable patient deaths and other scandals. And that left the mostly Latino and African American residents of Watts and surrounding neighborhoods in the same predicament as Deadwyler four decades earlier: No nearby emergency room or inpatient facility, and a dearth of other medical services.

But sometime in 2014, the community, its political leaders and county officials are hoping for a do-over – the expected opening of a new, smaller community hospital that will feature a basic emergency room and digital sharing of patient records.

They also are hopeful that the new facility’s unusual governing structure will help it avoid the pitfalls that bedeviled King/Drew.

Neither Batchlor nor anyone else in the new hospital’s leadership wanted to talk much about King/Drew’s disappointing past. But all are quite aware of it.

“We have a legacy issue to deal with,” said Manny A. Abascal, chairman of the board of the MLK-¬LA Healthcare Corporation, the non-profit foundation that will oversee the new facility.

“We have no politicians on the board, no political figures,” he said. “We’re all just private citizens, and we have full control over the quality of the hospital. Some people would say the prior hospital’s management had challenges because of political influences or other influences and the like. And I think we’ve really addressed that in the new model by having a fully independent governing board that will be able to make decisions based solely on what’s in the best interest of the hospital and the patients and the standard of quality we want to uphold.”

King/Drew, located in the Willowbrook neighborhood, was more than a hospital. It was a symbol of the 1960s civil rights struggle, an employment center and a provider of medical care in an area where doctors were scarce and where much of the populace had no health insurance. Run by the county Department of Health Services, it also provided hands-on training for medical students from the adjacent Charles R. Drew University of Medicine and Science.

But somewhere along the line, King/Drew faltered — so badly that it became known in the community as “Killer King” — endangering many of the very people it was built to serve:

* Inspectors for the U.S. Centers for Medicare and Medicaid Services in 2004 found a “failure of the hospital to ensure quality health care in a safe environment” – including numerous patient deaths that resulted from poor nursing care;

* The county Board of Supervisors that year voted to close the trauma unit after a major certification group reported that the unit’s leadership didn’t identify and correct serious flaws. A basic emergency room remained open until the entire hospital shut down three years later;

* For decades, political leaders and county officials, including the Board of Supervisors, failed to fully comprehend and to adequately act on King/Drew’s festering problems.

One of the last straws occurred in 2006, when the facility flunked a “make or break” federal inspection. With half the hospital’s budget in jeopardy as a result, King/Drew closed the next year. An outpatient center and urgent care unit remained open.

The shuttering of King/Drew, whose emergency room in 2006 drew 44,300 visits, placed an immediate strain on nearby hospitals, the closest of which is about six miles away.

It wasn’t immediately certain that a new facility would rise from the mess. But in late 2009, the county and the University of California struck a bargain: The county would finance construction of a smaller-scale hospital and its operations, while UCLA would provide the doctors to staff it. The foundation was established, and the county and UC made the first set of appointments to its board. Future appointments are to be made by the board itself, though the hospital’s chief medical officer will be chosen by UC.

“We wanted to make it clear that this was a community-based hospital to serve the community and run by service-minded, responsible community citizens, and not run by UC and not run by L.A. County,” said Dr. John Stobo, UC’s senior vice president for health sciences and services. “The community has to take ownership. One of the problems before, in our view, is the community didn’t really feel ownership. It was run by the Board of Supervisors.”

The governing arrangement between UC, the county and the MLK-LA Foundation is similar to the structure of UC-affiliated hospitals in San Diego, Orange County and Stockton, Stobo said.

The old King/Drew inpatient tower did not meet current earthquake standards, and it may eventually be torn down. The new, $237.4 million six-story facility, located behind the old tower, is being constructed from the shell of a partially unfinished building.

There has been some community criticism of the time lag between King/Drew’s closure in 2007 and the new MLK’s planned opening on an as-yet undetermined day in 2014. But Batchlor pointed out that the MLK foundation board started from scratch less than three years ago.

“I think it is very timely to be able to open a hospital in 2014 when you started working on it in 2010,” said Batchlor, who previously was chief medical officer of L.A. Care Health Plan, a large public health organization with some 780,000 members. “We want to make sure that it’s done right, so that when we open, we are the high-quality, state-of-the-art facility that this community needs and deserves.”

Still, some community observers contend the new MLK has to open as early as possible in 2014 to take advantage of federally mandated changes in the health marketplace and to accept more of the uninsured as they gain coverage and join health plans.

“If they miss that window in which they can establish the necessary financial agreements and contracts with health plans and capture the newly-enrolled population, I think it will have financial consequences,” said Lark Galloway-Gilliam, executive director of Community Health Councils Inc., a non-profit policy and health promotion organization in Los Angeles. But, she added, “We have no reason to think that they’re not going to be successful.”

The new MLK will have 133 inpatient beds, about 100 fewer than King/Drew. The emergency room is projected to draw 30,000 visits per year. A trauma center, which requires teams of on-duty specialists and special licensure, isn’t contemplated anytime soon, Dr. Mark Ghaly, director of community health and integrated programs at the L.A. County Department of Health Services, said via email. The new hospital and its emergency room must “demonstrate a record of quality and excellence from which to build scope of service in the future,” he added.

The hospital will offer obstetrics, gynecology, endocrinology, urology, radiology and anesthesiology, among others. But pediatrics, psychiatry and specialized surgery services won’t be available. And while MLK won’t be a teaching hospital at first, Batchlor hopes to reinstitute a medical training program with UC, as well as a formal relationship with the Drew medical university.

One highlight will be its digital ties with nearby clinics and physicians, allowing patient records to be shared amongst medical providers. Officials also hope to integrate care so that the transition of patients between facilities, follow-up appointments and preventative care are more seamless. The California Endowment has contributed $1 million toward some of that work.

It is no easy undertaking to fashion a new hospital out of the ruins of an old one, said Abascal, a partner in the Los Angeles office of Latham & Watkins and co-chair of its litigation department. Some friends advised him against trying, citing the politics and the difficulties involved.

“I have to say those doubts really inspired me to get involved,” Abascal added. “This is very much worth doing. So the fact that it was difficult or people doubted that we could succeed really motivated me rather than scared me off. And I think the entire board feels the same way.”

Herbert A. Sample is a freelance writer based in Los Angeles, CA. He can be reached at hasample@mac.com