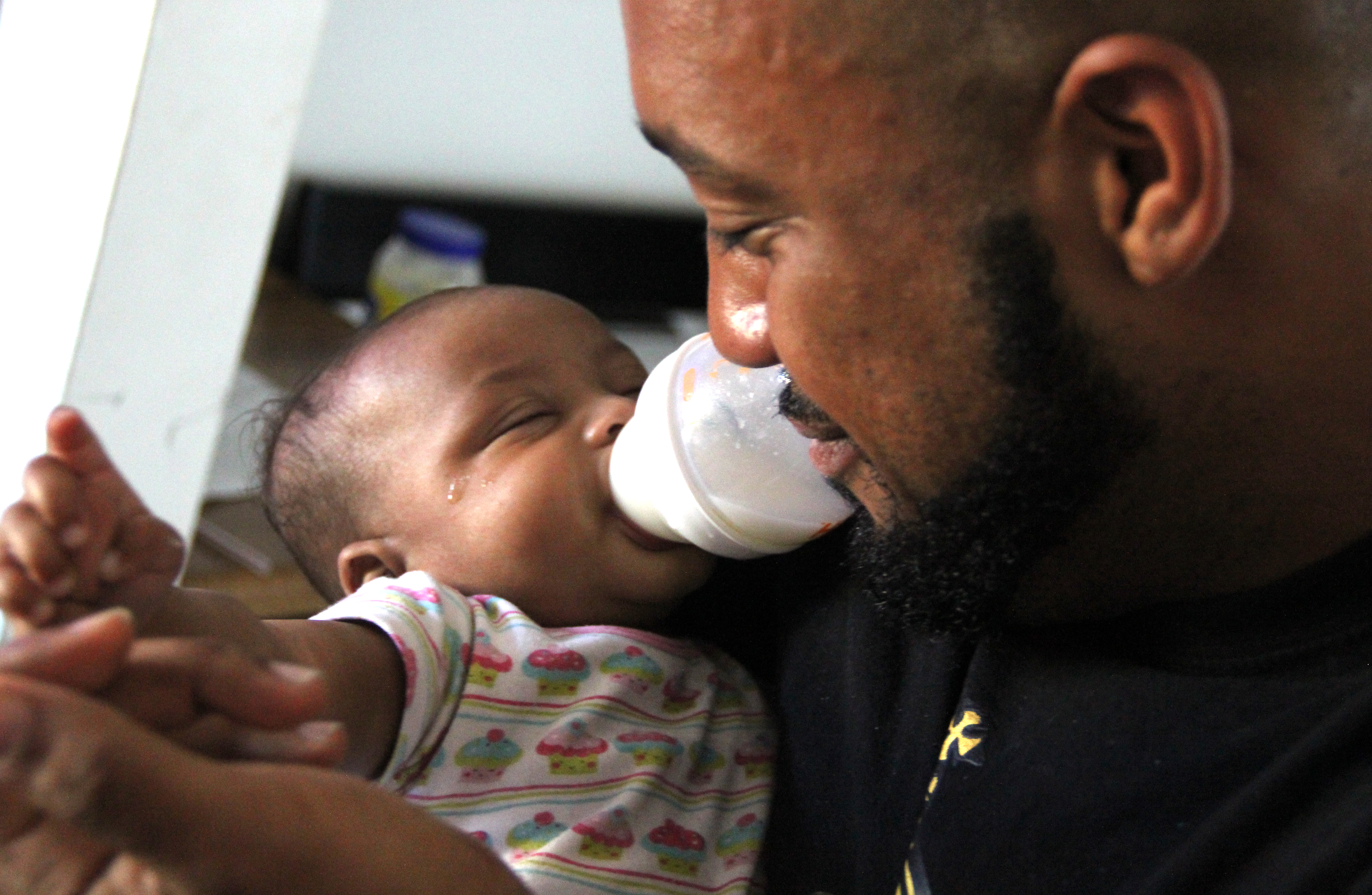 Men in Merced County are making powerful changes in their lives and those of their children. It’s happening because of All Dads Matter, a Human Services Agency program that offers something for every male parent: a boot camp for expectant and new fathers; a resource center that helps with everything from job searches to finding child care; support groups at which men can open up about any issue; and events called Man Plays with Food, a cooking and learning time for dad and child.

The one-day, three-hour boot camp targets to-be dads or those with infants up to six months, explains program coordinator Lamar Henderson. It has served 2,000 men in six years.

What makes this class different is that it features the hard-earned knowledge of “veteran” dads. These men, acting as teachers, know what they’re talking about when discussing topics such as their role during birth, postpartum depression and how to bond with a newborn. They’re old hands at diapering, holding and soothing a crying baby and are eager to pass on useful tips.

In addition to learning how to handle their babies, dads learn that, just like moms, they can feel stressed by their new roles. By the time they leave boot camp, they understand the huge emotional upheaval a new baby can represent and have methods for coping with it.

Having these tools at their disposal allows the men to build happier and safer home environments, Henderson says. All Dads Matter fosters deep and profound connections between father and child, he continues. “If you can get the dad connected by the time the child is 2 years old, the dad will stay involved.”

Michael, 20, is a boot-camp graduate who stays focused on his 3-month-old daughter, London, while answering a reporter’s questions. He says the class taught him that a baby has different cries that require different responses. “I’m a better parent,” he says as he gazes at his baby. “There’s a lot of stuff to look for.”

Oscar, 38, and the father of 10-month-old Lucia Grace, says boot camp made him ask himself, “How do you want your kids to see you in the future?” He says he loved his dad but alcoholism kept the two at a distance from each other. Oscar smiles broadly as he shows off a picture of Lucia on his cell phone, noting that she will be parented differently than he was.

That’s the whole idea behind All Dads Matter, according to Ana Pagan, director of the Human Services Agency. The county focuses on making the child-welfare system “a child-friendly environment,” she says. “We want to keep families together.” The multi-faceted program specifically for dads is a key part of building good families, regardless of whether the parents live together. “It’s a good way of fighting child abuse,” Pagan says.

The philosophy of the Merced County program is that it’s just as important to nurture grown men as it is children. Henderson points out the importance of keeping things “strength-based” and positive in All Dads Matter.

“From the time the dad walks in the door, that’s already a plus. A workshop on Saturday? You didn’t have to come,” Henderson says of the dads. “The great thing is we acknowledge every success.” For boot camp, it’s important for a dad to receive not only a diaper bag crammed full of everything a baby needs but a certificate of completion. “It’s the only one they’ve had,” Henderson notes.

Oscar has attended the men’s support group in addition to boot camp. He ticks off what it has offered him, including “freedom of speech, respect, anonymity. You let go of things. You have the opportunity to make things different. It’s amazing.”

When the group began in 2006, there were two or three men meeting once a week, according to Henderson, Now, there are 12 to 14 attendees per session, which are held twice a week in English and Spanish. Half of the men are referred and half just “need a safe place to go,” Henderson says. He recalls a participant who told his group, “ ‘I feel worthless as a dad.’ ” Discussing issues from their childhoods leads to “tremendous healing.”

Kenny, 46, is dad to Shantell, 6, and three-year-old twins Ken Jr. and Precious. He heard about All Dads Matter at a community picnic and started participating. He says he had seen his father only three times by the time he was 13 and didn’t accept his stepfather as a parental figure.

The program has changed how he parents, Kenny says. During an interview, he makes time for Shantell, showing her how a toy works. “It’s good for all dads,” he says, adding, “No matter what, there’s no game plan for being a dad. There’s going to be questions.”

They might include “What’s to eat, Dad?” To provide an answer, All Dads Matter joined with Head Start to initiate Men Play with Food. The evening event teaches dads, or other role models in a child’s life, and their youngsters, how to make inexpensive, nutritious food. A peanut butter pinwheel is easy to make, fun to eat and gets lots of shouted answers when the leader asks, “What shape, kids?” The most recent Men Play with Food attracted more than 50 dads, according to Henderson.

While it’s a fun evening, a video of one event features a dad talking through tears. “The thing I hold dearest to me is my son’s smile that day when it was one hour of my time,” he says. “The hour, the smile, I can never replace that.”