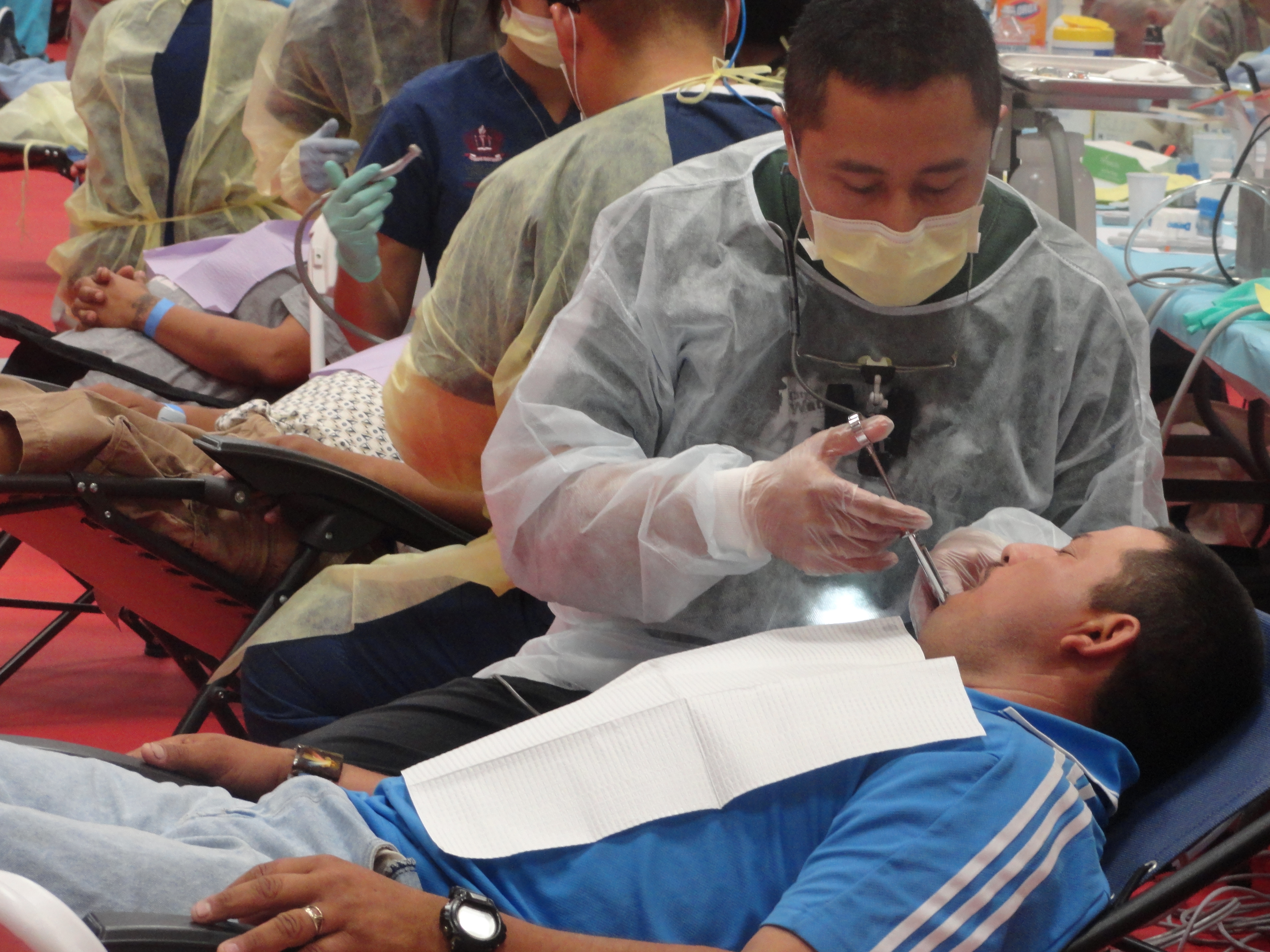 On a recent Saturday hundreds of families waited patiently in punishing 108 degree heat – for the chance to get an eye exam and a pair of glasses – at Desert Mirage High School in Thermal, California. The line for medical exams snaked out the door, and the entire gym was packed with people waiting to see a dentist, nurse, podiatrist or Ob-Gyn. In other rooms physicians provided physical therapy, chiropractic exams, mental health evaluations, HIV tests, hearing tests, physicals and more.

In all, more than fifteen hundred people jammed into the free clinic offered by Los Medicos Voladores, also known as the Flying Doctors. Normally the group runs clinics in third world villages in Central and South America. But 17 years ago a local Nurse Practitioner named Rosa Lucas invited them to visit the rural communities in the eastern Coachella Valley (about 30 miles outside of Palm Springs) where entire families toil in the fields with little pay and no health insurance.

Lucas is now on the board of a group called Coachella Valley Volunteers in Medicine (CVVIM), which runs the only free clinic in the Coachella Valley.* “The Flying Doctors saw the conditions in our trailer parks,” Lucas says “and saw that they were just like the pueblos in Mexico that they were already serving. So they agreed to come here, too.”

Salvador Ceja Cervantes is an undocumented farmworker with bad vision and shoulder pain. He came to see an optometrist and a chiropractor. “I can’t bring my arm up over my head because of shoulder problems,” he said, in Spanish. His wife Elsa needs dental work. Their four kids were born here so they qualify for insurance through a low-cost insurance plan subsidized by Riverside County.

Ana Bautista, an undocumented retired farmworker, depends on the Flying Doctors for health care. “I have a rash on my face. It’s been there a week. I need the doctor to check it and I need glasses. It’s wonderful that they do this for the community. Without it I’d have to wait to get treated until I can save up the money to see a doctor or maybe go to Mexicali to see someone there where it’s cheaper.”

Sixty-one-year-old Francisca Rojas came with her husband and sister to get glasses. “I am a housekeeper. I work on my own so I don’t have insurance. An event like this is very necessary. Thanks to God it is here. Without it I don’t know where we’d be. That’s the truth. “

Many of the patients at the fair are American citizens who say they’re struggling in this tough economy. Nita Carranza is a 29-year-old substitute teacher with a degree from UC Berkeley who came to see the doctor for an ear infection and a rash. “It’s really hard to get a full-time job that has benefits. I’m just trying to survive like everyone else. With all the budget cuts at the schools in California a lot of my hours have gone down. I’m thinking about going back to school to do something different.”

She’s worried about her hometown of Coachella. “A lot of people here do not have any type of insurance coverage. And they need it. It doesn’t matter, citizens or not, there are a lot of children and senior citizens in need of health care. It’s not just farmworkers, Mexican immigrants trying to get free health care. There are a lot of American citizens, definitely.”

Mayra Gonzalez is a homemaker and mother of three girls under the age of six. Her husband works full-time as a skilled carpenter but gets no benefits. “The kids have insurance but we don’t, so that’s why we are here. I feel glad to get this opportunity, because if we are sick we can’t pay for a doctor visit. Now we have this so at least once a year we can get our teeth and eyes checked. I have a hole in my tooth. I don’t want it to get infected.”

Valerie Bailey is 27 and has six kids – ranging in age from 11 to just 7 months old. She’s a full-time college student – studying criminal justice. Her husband just found work but the family’s health benefits haven’t kicked in yet. She’s got terrible vision, so on this day we find her in line for a vision check and a free pair of glasses at the health fair.

“I think it’s a great thing that they’re doing. I really appreciate it. I have been in college for more than a year now and it’s been a struggle the whole time. Cause I don’t have any insurance and it’s been too expensive to get glasses. It’s been very hard. I have to sit way in the front by the teacher.”

Alan Kuehn, a dentist with the Borrego Community Health Foundation, has volunteered at this event for four years. “There are obviously some severe needs in the community. A lot of them have multiple needs, surgery, restorative work, really bad periodontal problems, cleanings. The amazing thing is that you have this many people donate their time. The effort is enormous and it’s going well. I feel I have to give something back to this community. That’s the way America should be.”

Lucy Moreno, with Clinicas de Salud Del Pueblo, did most of the work organizing this massive event, coordinating with more than 130 doctors from the Flying Doctors, plus 150 local doctors, registered nurses, nurse practitioners, medical students and administrative volunteers. CVVIM also helped with pre-planning and contributed half a dozen doctors and ten dental assistants to the event.*

Moreno says she makes the effort because the need is so great in the Coachella Valley. “It’s just the ratio of doctors to patients. We’re lacking in resources and access to affordable health services. Our clinic does provide those services but it’s just not enough.”

Quite a few families who have medical insurance showed up at the health fair anyway. “Many are underinsured. The most important things at this fair are dental and vision, because those are the ones that almost no insurance covers,” Moreno explained.

Many families qualify for free or low-cost insurance but don’t realize it. Medi-Cal covers the disabled and very low-income families. Riverside County Health Care (which debuted in January) helps patients who make slightly too much to qualify for Medi-Cal. And the county-run MISP (Medically Indigent Services Program) gives emergency care and preventative medicine to low-income adults, regardless of their immigration status. MISP is designed to save money by reducing costly visits to the emergency room by desperate patients. Clinicas De Salud del Pueblo set up a table at the health fair to help families start the paperwork to qualify for those programs.

Moreno says she’s saddened by the number uninsured people in Riverside County. “The system really needs to be fixed. Something needs to be done. In the meantime if we can have people come volunteer for things like this I’m all for it.”

Quite a few local non-profits set up booths to offer their services, including the FIND food bank, The Braille Institute, and Molina Health Care. Eduardo Guevara, community organizer for a group called Promotores Communitarios del Desierto, brought a contingent of volunteers to help with logistics, setting up tables, helping with supplies, and directing people to the correct waiting areas. “We’re trying to fill the gap in the medical services here in the area. We’re seeing each year more and more people coming.”

In fact, the next Flying Doctors clinic in the area will take place April 4-7, and will be held at an even bigger venue: the Riverside County Fairgrounds in Indio.

Guevara says he’s seen patients of all ages, infants to seniors and every age in between.
He says that for many people, this health fair is the only health care they get all year.
“Actually I know people who have to wait from one event like this until the next because they don’t have any money for medication. They wait six months, eight months, mostly related to diabetes and heart disease.”

To remedy that problem, CVVIM offered patients appointments for follow-up care at its free clinic in Indio, the first time that has been done at a local Flying Doctors’ event.

CVVIM Board Member Rosa Lucas says, “Since Coachella Valley Volunteers in Medicine provides no-cost high-quality health care to those who qualify for no other coverage, a hole in the delivery of health care has been filled. Our volunteers deliver care not only for patients identified at Flying Doctors but also for the thousands of individuals who are referred to us by clinics, pharmacies, and individuals.”

Lucas has studied the reasons why patients flock to the Flying Doctors’ events and the CVVIM clinic. “A lot of them are working class people who lost their jobs, lost their homes, etc. And a lot of them have had to take their Social Security benefits at age 62 because they lost their job. But they aren’t 65 so they don’t have Medicare yet.”

“They brought in all of the dental supplies and dental chairs. They did all the set-up, including cubicles for the doctors. They even brought with them an acupuncturist to help with matters such as pain and stress relief, joint problems, carpal tunnel… all kinds of problems that people might have.” The Coachella Valley School District opened up Desert Mirage High School to provide the clinic with an air-conditioned space with free electricity and water.

The Flying Doctors started in 1975 as a group of doctors who are also pilots. The Coachella Valley is their only stop in the United States, although they’d like to expand.

“There are a lot of places that need this help and they’re not all third world,” Rossmann says. “We’re looking at possibilities of working in other areas in California. But it is a difficult environment. Because the regulatory issues: the insurance issue, questions about where doctors and dentists are licensed to practice by boards, those all have to be considered.”

*The story has been changed and updated to include the role of Coachella Valley Volunteers in Medicine in organizing the Flying Doctors event.