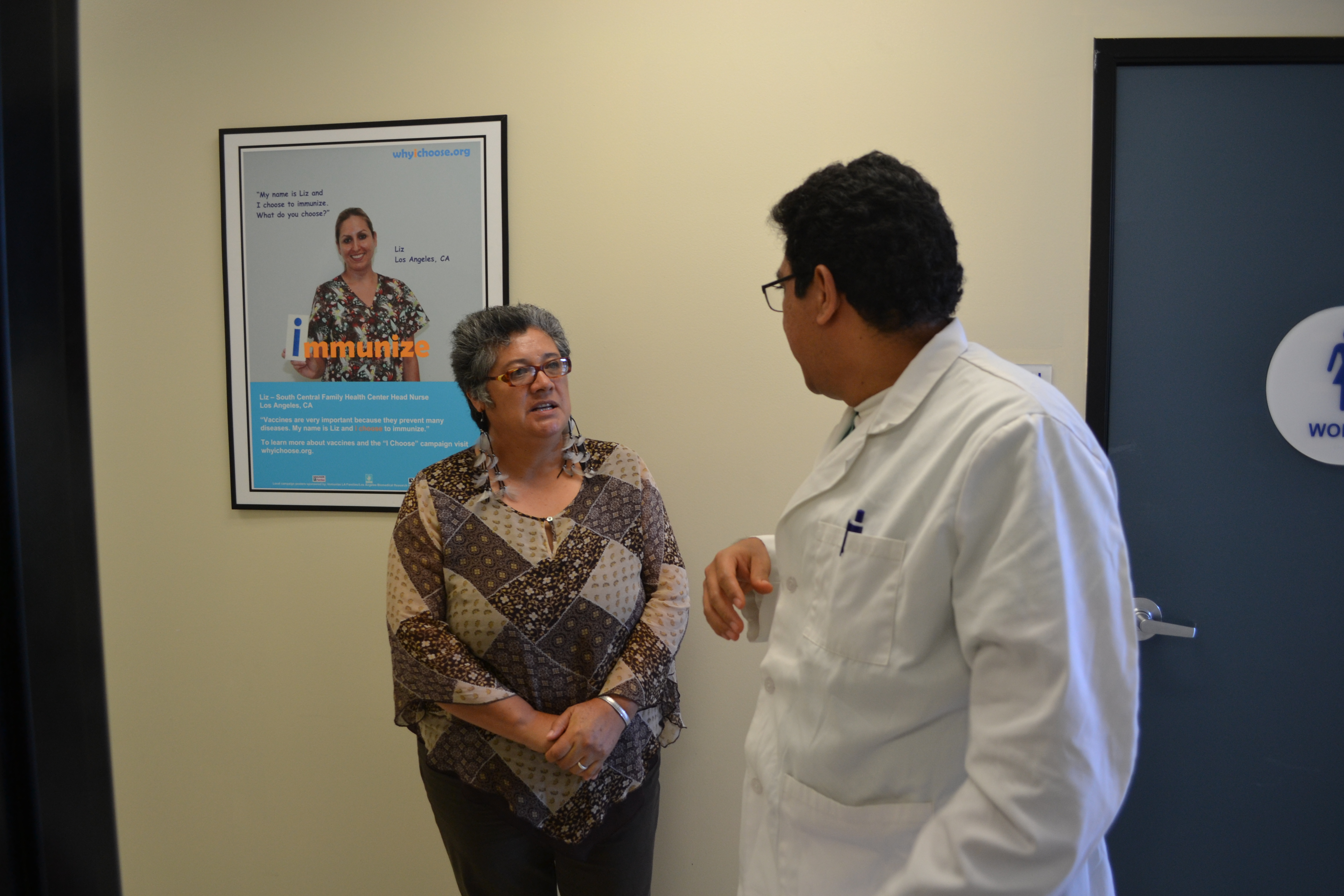 Patients are traveling from other parts of Los Angeles to seek care at the South Central Family Health Center, a clinic that provides health care to the uninsured – and is using grants from the Recovery Act and the Affordable Care Act to innovate and grow.

When seeking treatment for her hemophilia and his Guillain-Barre Syndrome, Martha and Rafael Munoz made what was for them an easy decision. Despite living in Hawthorne, the husband and wife chose to receive healthcare at South Central Family Health Center, twelve miles away.

“We’d been going to a lot of clinics and hospitals like Harbor and we didn’t like how they treated us as patients,” Martha Munoz, 51, said during an interview on a busy Wednesday afternoon in September at the South Central Family Health Center. “I feel that they treat us as a file number.”

Founded in 1981 as a small clinic at the corner of San Pedro Place and South Main Street, the non-profit moved into its current location – a vacated meat market – early last decade. The mission of the federally qualified health center is “to provide quality healthcare services for the uninsured and to the under insured population of Los Angeles County, specifically South Los Angeles,” according to Jerra Ferguson, South Central Family Health Center’s Development Director.

Dr. Aguilar said the clinic sees between 250 and 300 patients on a given day, but still has to turn away between 20 and 50 people. He said he talks to a number of patients who were once insured.

“Every day we turn people away,” Dr. Aguilar continued. “We try to do our best. A nurse checks them out to make sure it’s nothing serious that cannot wait, but it’s something that’s a daily occurrence here. We’re always looking for ways to innovate, to find new manners of service to augment and do more.”

Genevieve Filmardirossian, SCFHC Chief Operations Officer, estimates that more than 60 percent of the patients the clinic sees are uninsured, and the remainder are either insured, under insured or receive Medi-Cal or some other type of assistance. Martha and Rafael Munoz, who sell hardware supplies at a local swap meet, rely on Medi-Cal.

Filmardirossian emphasized the clinic’s focus on prevention and education.

“Our model is to heal, to empower and to educate the community,” Filmardirossian said, echoing the clinic’s motto. “We empower these patients to take care of themselves so they are healthy and they have better outcomes. If you take care of yourself and are able to control the illness that you suffer, you will not be a frequent user of the ER. We believe that staying healthy and prevention is the key to being healthy.”

South Central Family Health Center has been able to increase services thanks to a number of federal grants. In recent years, the clinic received Recovery Act assistance through the Health Resources and Services Administration, including $1.3 million in a New Access Point grant, $304,000 for an Increased Demand for Services grant and $1.6 million for additional construction, renovation, equipment and health IT.

With the added funding, SCFHC opened the Huntington Park Family Health Center in 2010, remodeled and expand its main location; added mammography and radiology rooms; added staff; and extend hours. The primary location is now open from 7 a.m. to 7 p.m. Monday through Friday and from 7 a.m. to 6 p.m. on Saturday.

More recently, SCFHC received Affordable Care Act funds through Health & Human Services. The $500,000 grant received in May will go to the Huntington site and allow the clinic to provide dental care.

“It’s just allowed us to meet the expanding need,” Ferguson said. “We have to grow to meet that growth in the community. There’s challenges that come along with that and we’re continuing to do what we can to try and meet those challenges.”

One of the advancements that SCFHC has made is in the department of medical records. Each exam room includes a computer terminal, where providers can enter updates, go over medication, schedule appointments and more.

“The fact that a patient can call me and ask me a question about his labs, I can just look it up in the computer in a manner of a couple of minutes,” Dr. Aguilar said.

While the clinic works to keep up with demand, South Central Family Health Center leadership wants to learn what it can do better and to get the word out about its services. To do so, the clinic has formed a Patient Advisory Committee.

Fanny Ramirez, 58, has been a patient at SCFHC for approximately six months now. She works part-time as a housekeeper and does not have insurance. Ramirez lives in the area and heard about the clinic from a friend.

“I wasn’t being attended very well in the other place I was attending,” Ramirez said through a translator. Ramirez sought treatment for her an irregular heartbeat, as well as arthritis, poor blood circulation and cholesterol. She plans to join the Patient Advisory Committee.

Rafael and Martha Munoz are also both on the Patient Advisory Committee.

“There is something important for why we are in the committee,” Rafael Munoz said, with translation from his wife. He emphasized keeping the community healthy and out of the emergency room. “If the community is receiving good medical service, they won’t be in the emergency rooms of the hospitals. If there are people not getting sick it’s going to be more productive to the country.”