State schools ahead of curve with federal lunch changes 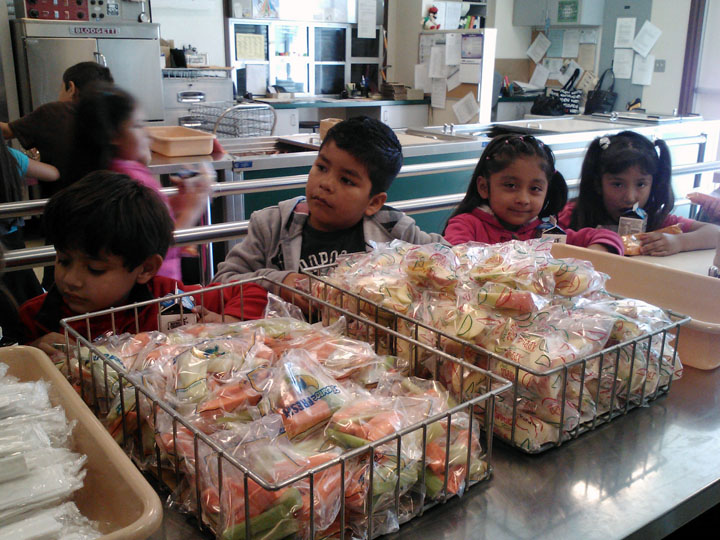 School lunches are a lot more colorful this year as cafeterias across the state have started the first of several nationwide changes to the federal lunch and breakfast programs that provide free and reduced-lunches to low-income children.

One of the most noticeable changes is that students have to take a fruit or vegetable with their lunch meals while in the past they could decline produce entirely. The schools are also offering a variety of vegetables, called a “rainbow” of options. Each week students are now offered leafy dark green vegetables; red and orange vegetables; beans, peas or other legumes; starchy vegetables such as corn or potatoes and other vegetables on the menu.

“We are working really hard on that,” said Vicki Day, a district supervisor for food service for the Fresno Unified School District. “It is a little bit of a challenge.”

The Central Valley school district serves 82,000 meals a day to students from preschool to high school, with more than 80 percent of the students eligible for the free or reduced meals.

Day said the district has been using the same vendors to provide the new vegetable requirements, but they have also been working with a group that is offering a safety standard program for smaller valley farmers so they may be able to provide more locally-grown produce to the schools in the future.

She said the school offers a fresh fruit and vegetable program where students are offered a taste of produce at recess, which has made it easier to get them to select items on the new lunch menu.

Naomi Gonzalez, a nutrition and physical activity teacher at Frank Paul Elementary School in Salinas, said the food services department for the Alisal Union School District, was already offering a daily salad bar for students before the requirements changed for this school year.

She said the schools participate in a Harvest of the Month club that allows them to sample a different fruit or vegetable each month. The food service director makes sure the featured vegetable is available at the salad bar throughout the month.

The school has a grant from the Champions for Change Network for a Healthy California that allows them to provide the programs and emphasize healthy foods. The Alisal Union School District serves nearly 19,000 meals a day. Some of the recent offerings at Frank Paul have included cherry tomatoes, garbanzo beans, jicama sticks, melon, pineapple, dried cherries and more.

When school started in mid-September, she said, she was encouraged that many of the students talked about eating healthy foods during the summer and exercising.

The expansion of vegetable offerings at local schools is just one of several changes put into effect this year as part of the Healthy, Hunger-Free Kids Act of 2010. In California, 31 percent of children 12-17 are obese, with one in three children ages 9011 at risk of becoming overweight or already overweight, according to a report by The California Endowment.

The changes in federal law were designed to make school lunches healthier. School districts and vendors were given a period to comment on the changes and then in Jan. 2011 the final rules were adopted for the beginning of the 2012 school year.

As part of the new standards, students in kindergarten through sixth grade are provided with 2.5 cups each of fruits and vegetables each week, with students in ninth to 12th grade provided with five cups of each. Other changes include requiring at least 50 percent of grains served at breakfast and lunch be whole-grain rich. Only 1-percent milk or nonfat milk or flavored milk can be served.

Day said Fresno schools had already started offering baked goods made with whole grains last year. She said the rolls and cookies served are made on site at the district. Next year, schools will be required to serve 100 percent whole-grain rich products. The schools are offering a chocolate milk that has been reformulated to have fewer calories than the white milk.

Some of the changes in the Healthy, Hunger-Free Kids Act of 2010 do not go into effect immediately, so districts have a chance to work with vendors to meet the requirements. The law calls for lowering sodium in meals to less than 430 mg. for breakfast meals for kids in kindergarten through fifth grade and less than 640 mg. for lunch meals for kids in that same grade range.

Public comments on the Healthy, Hunger-Free Kid act largely centered around concerns that vendors needed more time to lower the sodium intake of the foods they provide. With that in mind, the first lower target starts in 2014-15, with the final target implemented in 2022-23 to allow time for vendors to meet the new requirements.

“I know many manufactured food items have a lot of sodium,” Day said. “But we are working with vendors. We have food show tastings with vendors (to try new products.) They want to keep us as clients so they are always working to lower the sodium and sugar.”

She said they have some time to work on the lower sodium targets but that the vendors “are on notice.”

“It’s been a challenge, but it’s all for a good purpose and it’s what we need to do,” Day said.

State schools ahead of curve with federal lunch changes