NPs on the frontlines 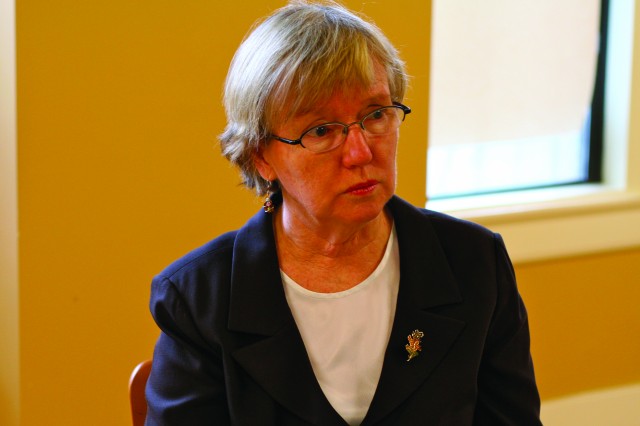 Glide, situated in the heart of San Francisco’s gritty Tenderloin neighborhood, is a haven for the homeless. Outside the shelter’s door, though it is just before noon, a group of men and women line up to wait for a bed for the night or a hot meal. Some push shopping carts packed with their belongings and hold tattered blankets, neatly rolled up. They press their backs against the wall as they try to shield themselves from the gushing rain shower soaking the street.

Hints of the state-of-the-art health center on the top floors of the onetime hotel start inside the lobby, in the form of posters and flyers announcing services ranging from free HIV testing to tai chi classes.

Patricia Dennehy, the director of Glide Health Services, has learned that low- income patients make better health decisions when providers focus on the entire person, not just the illness that landed them in the examining room. Challenges such as poverty, inadequate housing and unemployment can eventually wreak havoc on people’s health.

“We can’t take care of a complex person, who has had very little care for their whole lives, in a 10-minute visit,” says Dennehy.

Instead, Dennehy likes to say, the Glide clinic meets patients exactly where they are in life. With the right kind of support, she says, even the longest-suffering clients can make positive changes to improve their health.

And that’s something that nurse practitioners like Dennehy are uniquely positioned to do. Dennehy’s career has taken her from working as a hospital nurse to managing Glide, the largest nurse-practitioner health center on the West Coast, and one that’s considered a model for serving the poor.

“We see this nurse-practitioner model not as being the only solution,” she says, “but as being a great part of what we can do to answer the fact that the uninsured don’t have primary-care access.”

“We know we do not have enough primary-care physicians, and training programs can’t fit the need,” says Dennehy. Nurses, she thinks, can help fill that void.

Studies have shown that nurse-run clinics reduce the cost of providing preventive health care. That’s mainly because of salary differences. Patients have the same health outcomes when they’re treated by nurse practitioners as when they’re treated by physicians, according to a 2007 study titled Substitution of Doctors by Nurses in Primary Care. What’s more, patient satisfaction was higher when nurses provided the first contact during urgent care. One likely reason for this finding is that nurses tend to give more information to patients and spend more time with them during visits.

Clinics reduce the cost of providing preventive health care. That’s mainly because of salary differences. Patients have the same health outcomes when they’re treated by nurse practitioners as when they’re treated by physicians, according to a 2007 study titled Substitution of Doctors by Nurses in Primary Care. What’s more, patient satisfaction was higher when nurses provided the first contact during urgent care. One likely reason for this finding is that nurses tend to give more information to patients and spend more time with them during visits.

Glide, a federally qualified health center, is one of 250 nurse-managed health clinics in the country. They integrate primary care, such as immunizations and health screenings, with services like psychotherapy, medication management for chronic pain and urgent care.

“Community health is the most exciting place to be, because this is where you can make your greatest impact,” Dennehy says, “working with families and communities to improve health and to feel cared for and empowered.”

“There are very exciting opportunities for people to work together with hospitals and other institutions of care to make sure we just do what we do better,” she says.
Glide clients are screened for depression and substance abuse, and are asked if they smoke—all during a regular visit—so the conversations become part of a long-term dialogue that nurses have with their patients. Health issues aren’t compartmentalized.

Dennehy makes this approach clear as she walks through the clinic, a soothing space of light colors and blond wood. In the waiting room, a man who appears to be around 50 years old has his eyes glued on the large flat-screen television. Flashing across the screen isn’t a movie, Dennehy notes, but a PBS video about health disparities, just one way the clinic integrates education, compassion and patient empowerment into the work it does.

Dennehy stops frequently to point out the accomplishments of other nurses at Glide, as well as mention student nurses who have moved on to work in other clinics. Elizabeth Goldstein is part of the clinic’s residency program, which started this year and gives additional training and mentorship to nurse practitioners (NPs) who work with high-risk populations.

As nurse-led clinics catch on, residency programs like this one will help clear any doubts people may have about the level of training that NPs receive. Dennehy was instrumental in bringing the residency program to Glide.

Goldstein, who had done six volunteer rotations at Glide, says her work at the clinic inspired her to change her career from architecture to health care. “I have so much to learn from the nurse practitioners here,” she says. “There’s an unbeliev- able amount of mentorship here.”

In the center of it is Dennehy’s vision, Goldstein adds. “She doesn’t say much, but when she opens her mouth, every- body listens. I just admire Patty tremendously. She’s a great role model for me.”

For the past two months, the health center has accepted only new patients coming from emergency care at Saint Francis Memorial Hospital and Dignity Health to receive follow-up primary care. The clinic’s needs are greater than its resources. The lines for the food kitchen and the beds wrap around the block.

“We can’t see everyone who comes,” Dennehy says.

Still, Dennehy says, Glide’s social justice mission continues. “What we do is continue to advocate, to have a voice in many circles about the needs and about the need to expand care,” she says with a measured acceptance of the limits of what one nurse’s clinic can accomplish. “That’s part of our work.”

NPs on the frontlines