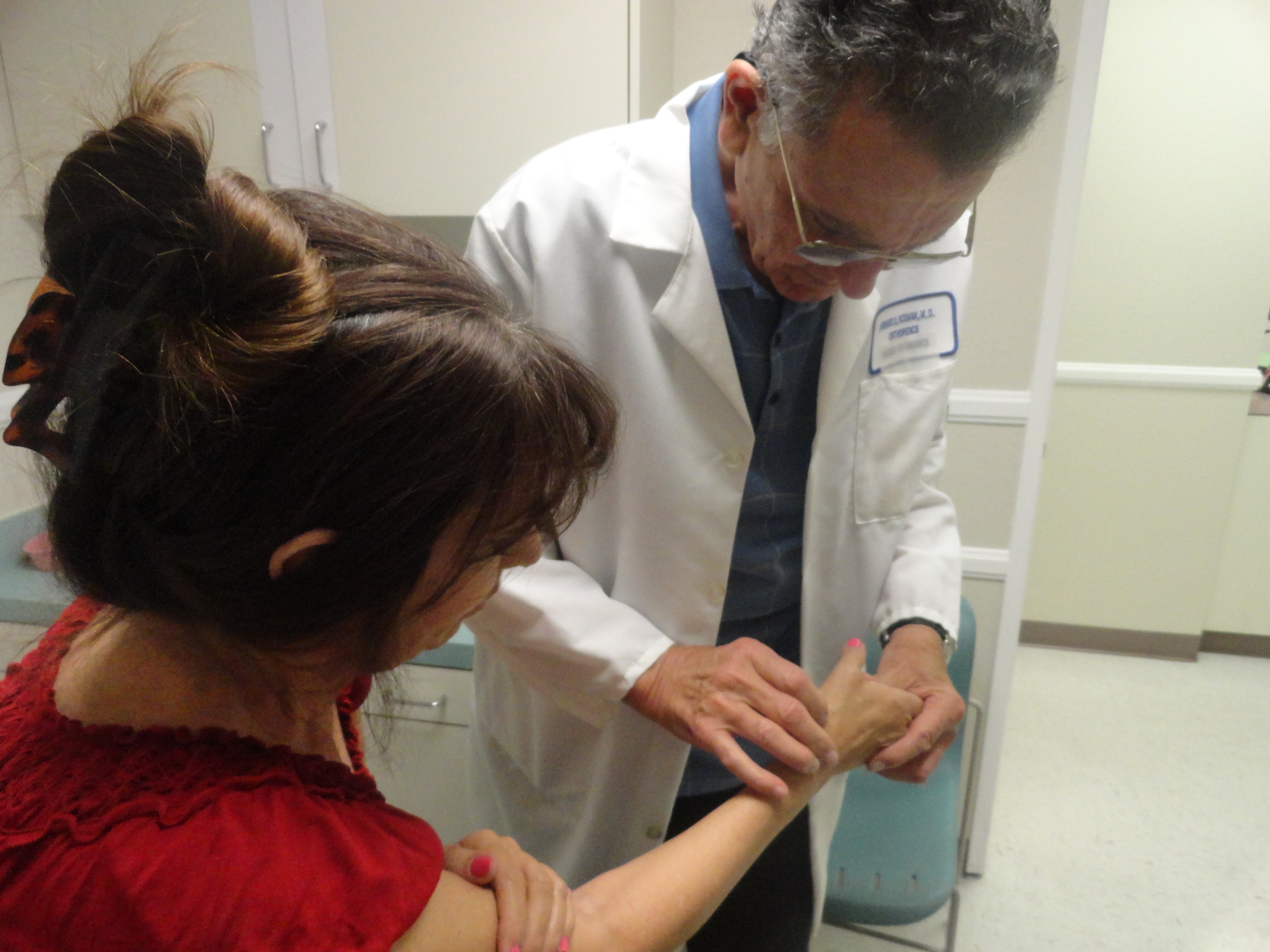 Sixty-two-year-old Mary Haralson’s right hand and wrist have gone numb…probably from years of carrying heavy trays of dishes as a waitress. She can’t afford to see a doctor, so she relies on a free clinic in Indio called Coachella Valley Volunteers in Medicine (CVVIM).

“I love it here because they’re so nice and so helpful and they don’t look down at you because you don’t have money,” Haralson says. “They help everyone. They’ve never made me feel awful about being in my predicament.“

Her predicament is all too common in this recessionary era. Over the past few years Haralson went through a divorce and lost her medical insurance. She was laid off from her job as a server at a hotel restaurant – and then lost her home to foreclosure.

“I lost everything, so I have nothing. I would have never been able to get my blood pressure medicine, medicine for cholesterol. It’s like 85 dollars to see a doctor just to get a prescription.”

CVVIM is the only free clinic in the entire Coachella Valley, with the exception of Martha’s Kitchen, which only serves the homeless. People like Mary, who’ve fallen through the cracks, are grateful CVVIM exists. “I don’t know what I would have done without them. I really don’t know,” she said.

“We’re kind of the safety net underneath all of the other safety nets,” explains Bruce Yeager, Executive Director at CVVIM.

Volunteers in Medicine (VIM) is a national organization with 90 clinics around the country. It was founded in 1992 by a retired doctor in Hilton Head, North Carolina, which is a vacation spot and retirement community similar to the Coachella Valley; both areas feature great wealth side by side with crushing poverty. VIM works as a simple equation of supply and demand – they match the supply of retired doctors with the demand for free healthcare among the uninsured.

The Coachella Valley chapter, CVVIM, survives because it only has two paid employees. Everyone else volunteers their time, including 15 doctors, 4 nurse practitioners, about 30 nurses, and 25-30 clerical workers. The model is a good fit for the Coachella Valley, where you have a large supply of retirees, including many medical professionals. And the demand is certainly there: the area’s two biggest economic drivers are tourism and agriculture, both fields that employ thousands of low-wage workers but don’t give them health insurance.

To qualify for free care, you have to live in the Coachella Valley, earn less than $3600 a month as a single person (which is twice the federal poverty level), and be an adult with no health insurance of any kind.

CVVIM was founded by Dr. Ron Hare, a retired vascular surgeon who is now Chairman of the Board at JFK Memorial Hospital in Indio.

Hare decided that, “it was time to stop griping about the number of people coming to the emergency room who don’t belong there, and do something about it,” Yeager says.

Dr. Hare convinced all three local hospitals to kick in $50,000 a year for five years. The hospitals hope to save at least that much by keeping people out of their emergency rooms.

CVVIM mostly treats patients for chronic conditions like diabetes, high blood pressure and high cholesterol, in an effort to manage these issues before the patient has a medical crisis and winds up in the ER.

The waiting list for dental care at CVVIM is 400 people long – and it takes 6 months to get an appointment. Regular medical appointments take 3 weeks. CVVIM doesn’t have the staff to take walk-ins, so people who need immediate care often still end up in the ER.

The existing clinic has three exam rooms and a dental laboratory. Some of the equipment was donated by Eisenhower Medical center in Rancho Mirage. Yeager purchased the rest with a $75,000 grant from the city of Indio.

Riverside County is currently building a new home for CVVIM that will double the clinic’s size. Now Yeager faces a big challenge: he must recruit dozens more doctors who are licensed in California, so that he can open the clinic full time. Yeager says the problem could be resolved if out-of-state doctors were allowed to practice in free clinics here.

“I could have a half a dozen snowbird physicians with valid Oregon licenses, valid Washington State licenses. And they can’t practice in this clinic because I require a valid California’s license to practice here,” Yeager says.

On this day, Dr. Howard Rodman, an orthopedic surgeon, examines Mary Haralson and recommends some cortisone shots so she can regain use of her hand. “We treat these people because first of all they have problems,” Dr. Rodman says.
“They’re hurting, they’re swelling, they can’t do their daily living as they should, and that includes looking for and maintaining a position at work.”

Haralson says she’s just relieved to get some expert care, even though she can’t afford to pay: “If this place weren’t here, I would be really in trouble.”