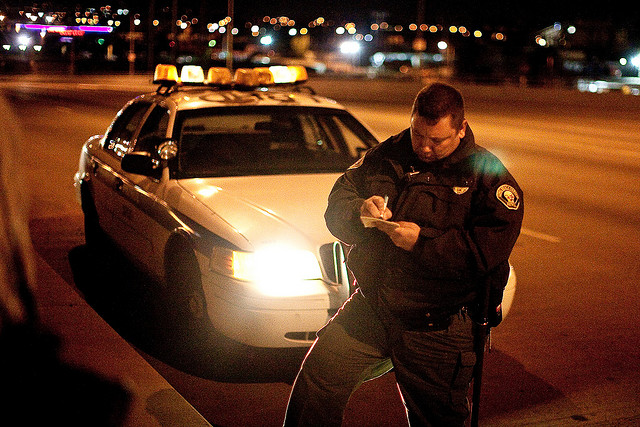 Sirens and gunshots don’t bother Curtys Taylor much. They’re common sounds in his East Oakland neighborhood, where earlier this month, six homicides occurred in just seven days. Instead, what usually concerns him is the location of the police.

“If I’m walking down the street and there’s someone with a black hoodie behind me, I don’t really trip,” Taylor, 19, said to a group of his peers at a youth leadership meeting in East Oakland. “If there’s a police officer driving behind me, I’m scared for my life. I know that they could shoot me and they could get off. They could say anything—dark skin, tall; I fit that description.”

Taylor and the rest of the room erupt in laughter.

Twenty-one year-old Rose DeLeon-Foote, an Evaluations and Data Analyst at Youth Uprising, joins in the amusement for a moment, then stops chuckling.

“It’s really sad that we all just laughed about that,” she said, “but it’s at that point.”

Several officer-involved shootings in the last year have created a wide mistrust of the police officers, especially amongst Taylor and other minority youth in East Oakland. At a recent meeting of YU Lead, hosted by the East Oakland community organization Youth Uprising, half a dozen people in their teens to lower 20s gathered around a conference table to talk about policing in their communities.

“The OPD (Oakland Police Department) is constantly putting into effect different strategies that sort of encase different demographics of people like black and brown neighborhoods,” DeLeon-Foote said, “and it’s the same places where they are doing gang injunctions that don’t work. It’s all the same thing with a different name slapped on it, and just a different way to profile people.”

DeLeon-Foote is referring to hot spot policing, a strategy the Oakland Police Department and many other law enforcement agencies use across the country. The logic behind hot spot policing is that crime is typically concentrated in specific areas, and the police should bring more resources to those areas. Hot spot policing is becoming increasingly popular in cities like Oakland, which is plagued both by high crime rates and a shrinking police force.

Although more police presence creates uneasiness amongst some Oakland youth living in high crime areas, the National Research Council on the Fairness and Effectiveness of Policing has called hot spot policing one of the best evidence-based approaches that police can take to reduce crime.

With reduced staffing, police departments need to figure out how to be more effective with their time. Like Oakland, San Jose, and Stockton, Sacramento has had to thin out its police force due to massive budget cuts. Most recently, Oakland had to lay-off over 100 officers.

“We’re at a point in time where policing needs to change,” Sacramento Police Department Sergeant Renee Mitchell said, “We cannot police the way we’ve policed before.”

Last May, Mitchell completed an experiment in the city, testing out the Koper curve theory of hot spot policing. According to this theory, sending police officers to these areas for as few as 12 minutes can cause a reduction in crime within that hot spot, if the police are highly visible.

In Sacramento, 4.7 percent of the city generated half of calls for police assistance, so Mitchell decided to put hot spot policing and the Koper theory to work.

Studies show that 70 percent of an officer’s time is downtime, which means that they are driving to a call or writing reports at their desk, but not dealing directly with crime. With this experiment, officers who are in between calls and have a bit of downtown were asked to go to hot spot areas for about 15 minutes. Once there, they were encouraged to get out of the car, walk around and strike up conversation with residents and business owners.

Mitchell said this is very different approach to typical policing. “What we did before, is when there was a problem, we threw cops at it,” she said.

But with fewer police officers, Mitchell said it’s impractical to evenly plant police officers through out the city. “You have to look at what the research shows the best way to know your crime and calls for service,” she said.

At the end of the three-month experiment, Mitchell found that violent crimes decreased by 25 percent in hot spot areas with more police visibility, while the hot spots in the control areas with regular patrolling had their violent crimes increase by 27 percent. Police believe the increase in other areas was not related to the decrease in the targeted neighborhoods.

Mitchell also found $300,000 in savings to the community, using the RAND cost of crime calculator.

The study was only carried out in two districts of Sacramento, but Mitchell expects to try it on a larger scale.

“Imagine the cost savings to your community if you’re putting this out city-wide all year long,” Mitchell said, estimating a savings of over $1 million for the city, in addition to preventing people from the psychological trauma of being a victim.

A 2003 Police Foundation report found that 7 in 10 departments with more than 100 sworn officers reported using crime mapping to identify crime hot spots and be more strategic in how they police.

In Oakland, the police department is testing out a kind of hot spot policing, but calling it by a different name.

Overall, however, crime in the city was up 25-35 percent. In parts of East Oakland, murders were down, but assaults were up. In West Oakland, robberies were down 16 percent but burglaries jumped 41 percent.

Earlier this month at an Oakland City Council subcommittee on public safety, District 7 Councilmember Larry Reid said he was in his East Oakland district all afternoon dealing with several shootings, two of which resulted in homicides. Already this year, Oakland has seen over 60 homicides, compared to 33 last year. It’s been an especially hard year for Oakland, in part because of the Oikos University tragedy, where seven people were shot and killed in April.

But Oakland Police Chief Howard Jordan also noted that help from federal agents over the last couple of months resulted in the arrest of more than a hundred people in Oakland, including suspected members of a violent gang.

Other partnerships with community organizations have also helped remove 70 guns off the streets, Jordan said. Despite some success, the police force remains understaffed to target other high areas of crime.

“Certainly we would like to hire additional officers to put out on the streets,” Reid said to the Public Safety Committee, “but we don’t have the money to do that.”

Jordan said he wants to do all he can to maximize the number of officers on the streets. “We are in a reactive mode; we don’t have the ability to be proactive,” he said, adding that the department will have to shift some of the problem-solving officers to crime reduction teams.

Oakland has had to do more with less over the years. The city continues to have one of the lowest police officer per person ratios in the state, with a police force of around 600 officers, compared to 800 before the recession. But the new police academy coming up in August should provide some relief to the declining force.

The 90-Day Violence Suppression Plan is separate from the well-known Oakland 100 Block Plan. Many of the same Oakland neighborhoods are covered under both plans, but the OPD’s recent report shows that crime is much more widespread throughout the city than 100 blocks.

Mayor Jean Quan unveiled the 100 Block Plan last October, two months after a 3-year-old was shot and killed in broad daylight on a street in East Oakland. Pressure was mounting on city officials and the police department to do something about the killing.

Her office set up a plan geared toward fighting crime in Oakland’s most violent blocks within the city’s budget constraints. She said the OPD, Alameda County District Attorney, federal law enforcement, probation and social service agencies would flood the 100-block zone with additional patrol and resources.

But now Oakland officials are acknowledging that the Mayor miscalculated where most violent crime in the city takes place in her 100-block crime-fighting plan.

“There’s a realism that the 100 block plan is not a plan,” Reid said. “Nobody is going to be using that to guide them in terms of fighting crime.”

Last fall, Quan reported that 90 percent of the crime in Oakland takes place in 100 blocks, but analysis from a non-profit data group reported that violence was much more spread out geographically. Urban Strategies Council reported that only 17% of homicides and shootings occurred within the top 100 census blocks in Oakland. The group used OPD data on crime reports from 2007 through 2011 to identify the 100 blocks with the highest levels of shootings and homicides.

Reid said Chief Jordan is not going to focus his crime-fighting strategy on the 100 Block Plan. “It’s going to be focused on where crime is at it’s highest,” he said, “and causing the greatest problems for residents in the city.”

The 100 Block Plan contained few details and Quan refused to disclose the data on which she based the plan. Yet she has insisted repeatedly that the strategy has reduced violent crime.

“We think that the approach of going to hot spots and focusing is absolutely the right approach,” said Olis Simmons, Executive Director of Youth Uprising. “I think the part that’s difficult about the 100 Block strategy, is that it wasn’t based on fact or verifiable data.”

Youth Uprising partnered with the Oakland Police Department when Ron Dellums was mayor and wrote a violence prevention piece called the Oakland Strategy. It was plan based on hot spots and listed many of the same areas defined in Quan’s 100 Blocks.

“So we’re very familiar with the place-based strategy,” Simmons said, “We’re in fact a place-based organization.”

Many people have critiqued hot spot policing as a method that just displaces crimes to surrounding areas. But David Weisburd, a professor at George Mason University and director of the Center for Evidence Based Crime Policy says there is a lot of evidence that shows crime is not so easily movable. On the contrary, he says what tends to happen is that the areas nearby get better.

Some residents also critique the tactic as unfair, saying it pulls resources out of higher income neighborhoods and increases the risk of burglaries and other crimes. If the police are really doing hot spot patrols, Weisburd said, then they’re not missing the affluent areas like parts of downtown and shopping centers.

But another view is that affluent areas don’t necessarily need that patrol. “People may not like that,” he said, “but the truth is that the police should be focusing their resources where they’re needed, especially when the number of police is declining.”

At the recent Youth Uprising LEAD meeting, people talked about a desire to see more resources for youth—not just more policing. Besides the programs and classes at Youth Uprising, there is a concern that there isn’t a whole lot for young people to do in East Oakland. For most of the youth, living in a hot spot means trying to stay out of trouble, but given the crimes rates of many East Oakland neighborhoods, it’s a daily struggle.

“What are we doing and what are we providing for young people to do,” Alyssa Evans, 23, Community Transformation Coordinator at Youth Uprising, said, “There’s an attempt to try and stop the assaults and homicides, but without actually thinking about what’s making these things happen in the first place.”