Food deserts may not be culprit in obesity epidemic 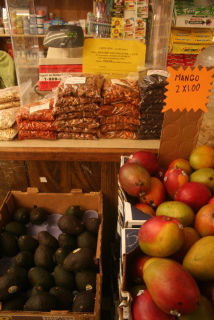 It’s no secret that low-income people and minorities struggle more with obesity. But new research suggests that health advocates and policymakers may have fundamentally misunderstood the reasons why.

Expanding waistlines are a national problem, with about one-third of Americans weighing in with a BMI higher than 30, the measure of obesity. But people of color suffer from much higher rates of obesity: about 44 percent of African Americans and about 38 percent of Latinos are obese, compared to about 32 percent of whites.

There’s a gap between well off and poor Americans too: about 35 percent of adults earning less than $15,000 annually were obese compared with about 24 percent of those earning $50,000 or more a year.

National policy, including a campaign led by First Lady Michelle Obama, has promoted opening more grocery stores in low-income areas. Tax breaks and federal funds now encourage the opening of grocery stores as part of the national Healthy Food Financing Initiative, a version of which has also been adopted in California.

But a recent study of food and diet in low-income city neighborhoods, published in the journal of Social Science and Medicine, yielded several very unexpected results.

As expected, these neighborhoods had higher concentrations of fast food stores and convenience stores says Helen Lee, the study’s author, a sociologist and policy fellow at the Public Policy Institute of California.

“What they also seem to have greater or equal access to were large scale grocery stores,” Lee said. “Now, that was surprising.”

The study used a unique combination of data – census tracts, information on all food stores, and a longitudinal survey of kid’s health – in a sophisticated analysis of the relationship between food availability and obesity.

Overall, the picture that emerged of low-income urban areas was more consistent with a food swamp — filled with convenience stores, fast food joints and grocery stores — than a food desert, Lee said.

Lee also looked for a connection between the wealth of food on offer in these neighborhoods and increased body mass among children.

She didn’t find one.

“There was no impact,” Lee said. “What you have access to in your neighborhood doesn’t seem to matter.”

Lee’s study is one of the few national looks at the relationship between food access and obesity, but her findings echo several earlier large studies. These include a report released by the USDA in 2009, which also found that low-income city neighborhoods were slightly more likely than their better-off neighborhoods to have a grocery store. In 2010, Mario Small, a sociologist at the University of Chicago, did an analysis of 331 American cities with similar results – no shortage of grocery stores in low-income neighborhoods.

A study published in the Archives of Internal Medicine in 2011, which collected data on more than 5,000 subjects in four cities over 15 years, also found no connection between supermarket availability and what people ate. Rand researchers also found no relationship between diet, weight and food availability for children and teenagers in California. Their study was published in the American Journal of Preventive Medicine last month.

What does affect a child’s weight, according to Lee’s study, is the amount of time spent watching television. “If that increased over time,” Lee says, “that was a huge predictor of obesity risk.”

The other important influence on BMIs was how much activity kids get outside of school. Children who play a sport or did other vigorous exercise that raised their heart rate for 20 minutes or more a day are less likely to become obese.

The basic problem is easily understood, Lee says. Americans are eating more calories than they burn. The solution may also seem as simple as righting that imbalance: eat less or move more. But Lee cautions that it’s not that easy.

All American’s lives have changed in a way that encourages an imbalance between what we eat and how much energy we use.

“People who have fought against it, they may join a gym or watch what they eat,” Lee says – but better-off people adopt those solutions more often.

“That’s why the food desert idea became so popular,” Lee says. Not everyone has the leisure time to exercise, for instance, or to deconstruct food labels, or cook. “That’s not doable for a lot of people. And through policy we should address that.”

Getting people moving and eating healthy food is a good goal, but Lee says we are far from a solution to the obesity crisis.

“It took 40 or 50 years for obesity to emerge as problem of big proportions,” Lee says. “There is no silver bullet here.”

Food deserts may not be culprit in obesity epidemic