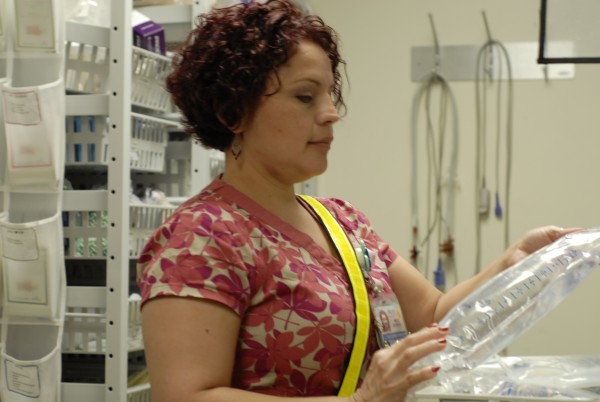 This year the first of the baby boomers turn 65 – and every day, more than seven thousand people qualify for Medicare according to the AARP. Older adults represent half of all hospital stays, nearly two-thirds of adult primary care visits. Still, experts and advocates say, learning to care for seniors isn’t a top priority in medical education.

But the Samuel Merritt School of Nursing in Oakland, where Hess teaches a Healthy Aging class, is trying to change that with a turn towards the dramatic.


For the last seven years, teachers of the course have worked with the Oakland-based Stagebridge senior performance troupe to bring the realities of healthy aging into the classroom.

The point of the Healthy Aging class is to train future nurses to help their patients be as independent as possible, Hess said. She teaches students, for instance, not to assume a stroke patient can’t wash their own face or brush their own teeth.

Kandell does workshops in other settings where he asks people to act out human behavior at different stages of life. Most teenagers think all people are using wheelchairs by the time they are 70. Hess brings in the Stagebridge performers to show Samuel Merritt students this is not the case.

It’s important, Kandell said, “to see that they’re people. Not just Mrs. B in room A.”

“They can be very talented,” he said of the senior actors, adding that the theater is uniquely moving and can make a lasting impression about the realities of older people.

“There is so much technical knowledge they need to have, they don’t have the time to learn probably the most important thing, which is how to connect with the person you are helping and how to see them,” Kandell said.

The Stagebridge session begins with monologues, jokes and songs from their play Never Too Late. The opening number includes lyrics such as “never to late to have a fling for autumn is just as nice as spring.”

The goal is to get people laughing and relaxed. “Laughing is the best medicine. The process of laughing does something physiological,” Kandell said.

Then some of the performers share their experiences dealing with the medical profession. Terry Stokes shares a positive story from the 11 months he took care of his son Chris as he battled brain cancer. During one hospital stay, the nurses tending his son broke the rules by allowing him extra visitors after seeing how it lifted his spirits.

“Nurses are the unsung heroes of our society,” Stokes said. His main message to the nursing students is to remember that they aren’t just treating a patient – they are treating a whole family.

Retired Oakland high school principal, Joanne Grimm has been involved in Stagebridge for the last 16 years. Seven years ago her husband developed frontal lobe dementia. During the five years she was caring for him she shared her struggles to understand dementia and within the medical system with the nursing students.

“The greatest fear as we get older is that we will lose ourselves,” said Grimm.

“We’re in a vulnerable state in the hospital,” he said. “For older people, they’re often treated with a lot of disrespect in society.”

Following the monologues the performers each sit with a small group of students and answer their questions. Grimm shares what she learned about caring for patients with dementia. She tells the future nurses that sometimes the best strategy is to distract a patient. “Shouting, criticizing or loosing your temper doesn’t mean anything to them,” said Grimm.

But her favorite questions are when they ask her about sex.

For the final portion of the Stagebridge session, actors and students do a role-playing exercise where participants take turns being a difficult patient. Students in the class suggest different scenarios, often with patients who don’t speak English, are angry, or are strung out on medication. During the role-play, students get a chance to stop the scenario and try a new approach.

Terry Stokes enjoys watching the students during the role-play. “The room will come alive with people who’ve been sitting there quietly,” Stokes said.

Hess says geriatric nursing often requires nurses to think outside the box. “Geriatrics is not a technical nursing discipline not like ICU where you depend on machinery,” said Hess.

Hess says that as baby boomers age, the medical profession will need to approach treatment differently. “There’s going to be a lot of healthy people out there with chronic conditions,” Hess said.

This program appears to be the first of its kind in the nation. The effectiveness of the program has yet to be studied, but for Grimm, it’s already made a difference in her medical treatment.

A year ago Grimm tripped over a cord and broke her leg. When she ended up in an Oakland emergency room, one of the nurses recognized her from the Stagebridge performance.

“So they were really good to me,” said Grimm. But when she was moved to a different floor with nurses who hadn’t been through the program, things were different.