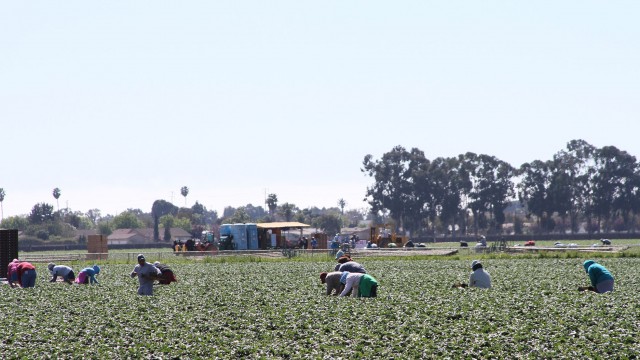 Agribusiness owners are opening the clinics to provide no-hassle health access to a population who often avoid seeking healthcare even when covered by insurance.

“One of the reasons for opening the clinic was to get our people to go to the doctor,”
says Patty Benkowski, vice president of operations for Western Growers Assurance Trust, which funds a worker-only clinic in Salinas. “It’s amazing the number of people we’ve seen that have never had a physical exam before.”

Opened in August, 2010, the Cedars Health and Wellness Center serves about 500 patients a month. Open six days a week, it costs only $5 per visit, with $5 generic prescriptions, with full laboratory services, including EKGs.

In 2009, growers for the Driscoll’s berry company also opened three low-cost clinics that serve their 18,000 seasonal farm workers and family members in Watsonville, Santa Maria, and Oxnard. (The company also contracts with the Cedars clinic to provide service to its Salinas workers.)

“We are able to make it work because we have a lot of employees,” says Yissel Barajas, director of philanthropy for Reiter Affiliated Companies, growers for Driscoll’s.

“Reiter was spending a lot of money on a health plan for their workers that was not very accessible,” says Barajas, “and (workers) still had to pay a lot of out-of-pocket expenses.”

She says the new clinics improve care on almost every level; they treat only Reiter members, are bilingual, accept walk-in patients, and have limited wait times: 15 minutes with an appointment, 30 minutes for walk-ins.

Operated by the on-site health provider Healthstat, the clinics provide basic and preventative care to workers and their families at a low weekly cost: $2 per worker, $4 with a spouse, and $6 for an entire family.

In the peak month of August, the trio of clinics treated more than 1,800 workers and family members.

Reiter last year also piloted a wellness program for workers that includes healthy eating and “practical” exercise. Plans are to eventually expand the program to all Reiter employees.

The clinics dispense 120 of the most popular prescriptions, including antibiotics and drugs to treat heart disease, hypertension, and other common ailments.

“I’ve told Driscoll’s ‘You need to tell Washington about this, because you’ve figured it out,’” says Dr. Marc Schenker, director of the Western Center for Agricultural Health and Safety at UC Davis.

Schenker contrasts the clinics to traditional healthcare providers and their expensive administrative overhead. “With this, you just go in and show your card and you’re in the queue to see the doctor,” he says.

A decade ago the California Agricultural Worker Health Study compiled some of the most comprehensive health data about California farm workers and found a shocking result: 25% of men, and 12% of women had never seen a doctor before. A majority of both sexes had never seen a dentist in their lifetime.

“There were a whole panoply of untreated health conditions,” says Don Villarejo, a longtime farm worker health expert who helped head the study. “You can go down the list, and there they are,” he adds, citing syphilis and other STDs, gum and teeth problems, anemia, obesity, hypertension, even one case of uterine cancer.

The overwhelming number of physical problems, however, were related to back-breaking field work: musculo-skeletal injuries of the back, arms, shoulders, ankles or legs.

These farm workers also showed high incidence of diabetes, due in part to a fat-laden fast food diet.

“Agriculture is one of the top two or three most hazardous industries in the nation,” says Schenker, also professor of Public Health Science at UC Davis. “There has been some improvement, but not nearly enough.”

Benkowski says that although 60% of the trust’s 3,000 member companies already purchase health insurance for employees, there was huge demand to create a health model “that would actually be used.”

While opening the Salinas clinic was largely a business decision to reduce absenteeism and turnover, social justice was also a contributing factor.

“It’s amazing how many of our members as employers, from a social justice perspective, really care about their employees,” says Benkowski.

The Western States trust eventually hopes to add similar low-cost clinics throughout California and into its Arizona operations.

Only a small percentage of California’s agricultural workers access the healthcare system. Typically, these laborers have to navigate a patchwork quilt of low-cost community and federally-funded clinics or — in acute cases — seek expensive emergency room treatment.

Estimates vary on how many laborers are employed in California’s agricultural workforce: from nearly 400,000 to over 600,000. Yet undocumented workers make up the vast majority of field laborer, with more than 80% of them Mexican immigrant men.

The stress of finding work and a place to live, fears of deportation, and living in the underbelly of American life translate into a wide variety of physical and mental woes, says Alicia Gonzalez, who has studied the health of undocumenteds for the Central Valley Health Policy Institute. Poverty fosters poor diet and obesity, which produce hypertension, heart disease, and obesity. All of these result in mental health problems, including depression and substance abuse.

“They’re afraid of being discovered,” says Gonzalez, “and they don’t know of any programs available to them. It definitely deters them from seeking healthcare.”

“They’re afraid if they go. somebody’s going to report them to INS,” agrees Benkowski.

To Gonzalez, there is a cruel irony in Fresno County’s position as the top agricultural economy in the state, with over $5 billion of food production in 2009.

“Fresno County is the richest agricultural growth county in the state,” says Gonzalez, “yet (Latinos) are the poorest as far as income per capita.”

“After about six hours is when our native population decides the work is too hard and they quit,” says Schenker.

Lack of preventative care to undocumented laborers winds up costing money in the long run: to the state, its residents, and healthcare providers.

California’s Department of Health Care Services, which pays for healthcare provided under the state’s Medi-Cal program, says that undocumenteds cost about $1.2 billion to treat during the 2011-2012 fiscal year, with $626 million of that paid by the state of California.

At the same time, the California Hospital Association estimates that hospitals last year lost $1.25 billion in uncompensated care to undocumenteds.

“It is considerably cheaper to nip it in the bud before it becomes full-blown hospitalization, which is considerably more expensive,” says Chad Silva, policy director for the Latino Coalition for a Healthy California.

Company-sponsored clinics may become critical in 2014 with new reforms under the Affordable Care Act that could make it even more difficult for undocumenteds to access care.

With millions of California’s 7 million uninsured gaining coverage through Medi-Cal or the exchanges established to cover uninsured Californians, state healthcare official are bracing for an onslaught of new patients, especially at already overburdened low-cost community clinics.

“I’m a little bit afraid that the ones who are left over will be even more marginalized,” says Xóchitl Castanada, director for the Health Initiative of the Americas.

“They live here and work here, and everybody acknowledges that,” says E. Richard Brown, director of the UCLA Center for Health Policy Research. “At the same time all of the overt policies and politics are to shun them and exclude them from publicly-supported healthcare and other services.”

“It’s a moral responsibility to help the people who help put food on our table,” says Gonzalez.