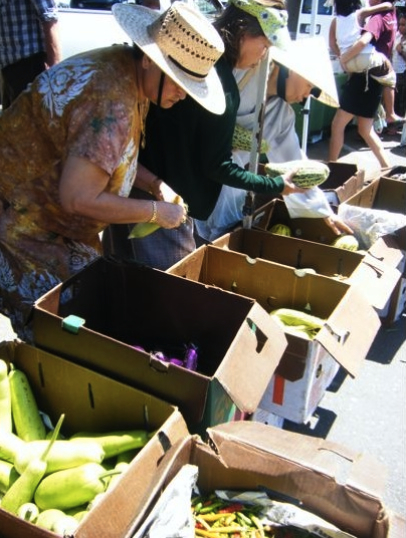 Sandoval, 21, and his volunteer group are fixtures at the Saturday market, but he hasn’t spent as much money there as he would like. A college student living on his own, Sandoval said he hopes to begin buying more of his produce at the market next month.

But first he is waiting to see if he’ll qualify for food stamps.

The City Heights farmers market is one of three outdoor markets in San Diego County that can process such public assistance funds. This service—bundled with a program that helps people sign up for benefits on site and another that matches their funds once they’ve been approved—has given low-income residents like Sandoval greater access to fresh, organic foods.

“There’s this idea that farmers markets are expensive, elitist and not welcoming of low-income people,” said Mallory Cochrane, a program coordinator at the market.

In City Heights, however, women in traditional East African garb as colorful as the produce they hold make transactions with wooden tokens for which they’ve exchanged food stamp credit. Many more speak Spanish with their growers. Others crowd one of the few Asian produce vendors in San Diego to purchase foods reminiscent of those in their home countries.

For these residents, access to quality produce depends largely on an electronic benefit transfer, or EBT, machine provided by the U.S. Department of Agriculture. The wireless device allows market organizers to charge food stamp EBT cards for tokens that can be exchanged like cash at booths. WIC checks can also be traded for tokens. Farmers then redeem the wooden coins they’ve collected for checks they can take to the bank.

“Being able to use my EBT is really important for feeding my family,” said Isabelle Dominguez, who emigrated from Mexico. She traded her tokens for a large basket of strawberries and an armful of greens.

The market has offered the payment option since it opened in 2008, but it wasn’t until this summer that foot traffic and purchases showed significant gains.

“Now, as soon as the cherries and tomatoes and—ooh—the blueberries show up, this place is busy,” said market manager Lorrie Scott. “It’s not hard to keep [customers] coming back, it was just hard getting them here.”

During its first two years, the market brought in only about $100,000 annually, Cochrane said. Since April, more than $80,000 in purchases has already been made, about $12,000 of it in food stamps and other supplemental funds. Cochrane said she credits the recent success to a fund-matching program that stretches customers’ food stipends.

Every client who taps into his or her public assistance money, including Supplemental Security Income for people with disabilities, is guaranteed a match of up to $20 per month through Fresh Fund, a program operated by the International Rescue Committee with support from federal stimulus dollars and the California Department of Food and Agriculture. When a customer spends $5 in food stamps, he or she will actually have $10 to spend that day.

“When my daughter came to this market, she was thrilled,” said Laura Parker, a vendor who sells herbs and fruit tree cuttings grown in her daughter’s backyard. “She came here with $10 and was excited to have enough produce for her family for two weeks.”

Since the match guarantee launched in April, more than 1,000 people have signed up, and about $30,000 Fresh Fund dollars have been distributed, said Cochrane. Of those who signed up, 64 percent said they couldn’t afford to buy market produce otherwise, according to the San Diego Farm Bureau.

Fresh Fund has also played a large role in convincing market goers to see if they’re eligible for public benefits in the first place, said Jennifer Tracy, a coordinator with the San Diego Hunger Coalition. The coalition prescreens consumers for food stamp eligibility on site. When someone applies, he or she is guaranteed $5 a week from Fresh Fund for a month.

“In my subconscious, I knew that I could get [food stamps], but it wasn’t until I came to the market that I though I would actually apply,” Sandoval said. “The market is good for this community because there are a lot of people who wouldn’t know where to go to sign up.”

In addition to visibility and convenience, Tracy said the program is an important form of outreach in the predominantly immigrant and refugee community. For new Americans who might not have experience navigating U.S. services and commerce, myths about public assistance are often as strong as misperceptions about the affordability of market produce, she said.

“Some are afraid that their kids will be taken away if the government finds out that they can’t feed their families, or that their children will get drafted if they use public assistance,” Tracy said.

Nurturing a Healthy Diet and Community

Cochrane said such cultural and language barriers also impact diets. Residents in City Heights are three times more likely to go to the emergency room for diabetes than other San Diegans and suffer disproportionately from diet-related high blood pressure and coronary heart disease, according to IRC.

For the IRC and Hunger Coalition, getting people to the market is a way to ensure that residents are increasing their intake of fruits and vegetables. Indeed, 90 percent of Fresh Fund participants said they’ve eaten more fresh food since signing up, according to the San Diego Farm Bureau.

“For refugees who spent an average of 17 years in a refugee camp, it becomes about survival,” Cochrane said. “They’re used to waiting in line for water, then they come here and see that they can go to McDonald’s and get the instant gratification of paying $10 to feed a family of five.”

“They don’t know what trans fats are because they didn’t have that in their countries,” Tracy added. “They might not know that a bag of Oreos isn’t good for you.”

What’s more, Ian Miller, a local foods advocate with San Diego Food Not Lawns, said grocery store produce isn’t necessarily the healthiest option because it’s been shipped from across the country or over seas. He said nutrients begin to leave produce as soon as it’s been picked; a longer commute between the grower and the shelves means more time for nutrients to escape.

The long distance also means knowing whether pesticides and chemicals have been sprayed on the food can be difficult. The market provides direct contact with growers who commute from only as far away as Riverside, which is why Valerie Camacho chooses to use her SSI funds at the market.

“Here, I talk to the growers and I have an idea of where it all comes from,” Camacho said as a vendor brought her a peach slice to sample. Camacho said she also knows that her money goes directly into the pockets of farmers.

“It’s a win-win for people in City Heights and the farmers,” said Tracy.

Now, other San Diego farmers markets are looking to take City Heights’ lead. The IRC operates markets in San Marcos and Valley Center with EBT machines and Fresh Fund, and is looking to open another this fall. Another market manger, Brian Beevers, is planning to accept food stamps at his more affluent markets in Mission Valley, Point Loma and University City. Beevers said providing the services where it isn’t necessarily needed is about sending a message.

“Local, high-quality food should be available at every income bracket,” Beevers said.

Including Sandoval’s income level, which he said is sometimes barely enough to pay for rent and classes at the local community college.

As Sandoval wrestled a new tube into the tire of a primary-colored tricycle, he talked about the importance of teaching kids to fix their own bikes and about one day traveling the world to advocate on behalf of traditional farmers.

“It’s empowering once you’re self-sufficient,” he said, as if referring to bikes and agriculture at once.

Before he finishes his degree in environmental studies and packs his bags, he’ll have to focus on food justice a little closer to home. His first victory could be getting approved for food stamps next month.