Changing the message of aging…subliminally 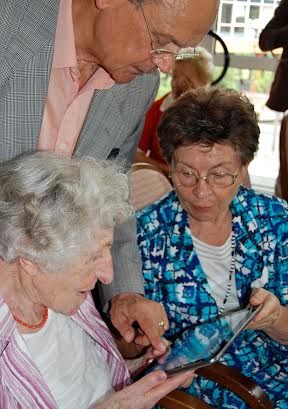 As a reporter who covers Aging issues, discussing the topic in public typically evokes this response through clenched teeth:   “Getting old sucks.”

There are variations on this reply – some involve profanity – but today’s accepted cultural message is that aging is terrible, horrible, no good, and very bad.

Yet by far the most important lesson I’ve learned during three years on this beat is that getting older is actually an immense opportunity for freedom and growth.  Time and again, stories have surfaced about older adults who are flourishing by breaking through creative and emotional barriers to redefine themselves in ways they never imagined.

A new study from Yale University illuminates just how powerful messages are when it comes to aging – and how they can influence both our self-esteem and health.

The study showed that older adults who were exposed to positive subliminal messaging once a week for four weeks showed not only improved attitudes about aging, but better physical health.

Led by Becca Levy, who directs the Social and Behavioral Sciences division at Yale’s School of Public Health, researchers visited 100 older adults at their homes and senior living facilities near the university in New Haven, Connecticut.

The participants, from 61 to 99, played a simple computer game using a bull’s eye and arrows.

Subliminally, the study group was flashed words on screen that supported positive aging – “spry,” “wise,” “sage” and “hardy” – too quickly to actually be seen.  A control group was shown nonsense words.

Three weeks after they finished viewing the subliminal material, the older adults showed marked improvements not only in their self-perceptions of aging, but also physical functioning.  The control group remained unchanged.

“The participants exposed to this intervention were significantly more likely to present a positive image of aging than those in the (control group),” summarizes the research team, which included a member from the University of California, Berkeley.
In a culture saturated with negative images about older adults, the study points to the growing need for public awareness about aging stereotypes.

Levy in 2012 also studied Facebook groups devoted to aging, and discovered some shocking results.  In a sample of 84 groups with over 25,000 members, 74% of the sites criticized seniors, 27% infantilized them, and 37% suggested banning them from public activities.

During this recent study, Levy says there was also a clear correlation between media exposure and aging.

“Those that had more lifetime television viewing had more negative views of aging,” she says.

Aging experts around California insist that our cultural attitudes about getting older are wildly inaccurate and harmful.

Laura Carstensen, who directs the Stanford Center on Longevity, has long insisted that older adults are actually much more content with their lives than those in middle age – despite common public perceptions.

“When we realize we don’t have all the time in the world, we see things more clearly,” says Carstensen. “A lot of our concerns and fears of aging overly dramatize the dire straits of the elderly… The vast majority of people in their 70s are not functionally impaired.”

Nader Shabahangi organized the 2011 conference “The Poetics of Aging,” and at his AgeSong facilities in the San Francisco Bay Area treats older adults as “wise elders.” He says that modern society has defined human value almost solely in terms of consumption.

“Most (cultural) messages are about productivity in the sense of material production, financial gain, good and youthful looks, physical fitness, and power,” says Shabahangi. “Given such mainstream thinking and views, elders are seen as unproductive, slow, physically unfit, conservative – in terms of buying and spending money – slow thinkers who can’t keep up with the latest demands of society.”

One goal of next year’s planned White House Conference on Aging – the first in 10 years – is to improve Americans’ attitude about older adults.

“We’re trying to change the narrative about how people are aging,” conference head Nora Super told the California Commission on Aging during a September visit.

During years of research at Yale, Levy has studied the aging process – and perceptions of aging – developing several keen insights.

Deaf Americans, for instance, have fewer stereotypes about aging than hearing Americans because of their common bond.

“The deaf culture tends to be pretty intergenerational,” says Levy.

Subliminal messages have long been used for both helpful and nefarious means – for motivation, to aid sleep, or sell products.

What are the potential benefits of subliminal messaging with regards to aging?  Levy declines to project the practical uses of her research, saying more work needs to be done to bring this into the world of senior living – or the culture at large.

Nationally-known longevity expert Dr. Walter Bortz II, 84, says the most powerful motivators for social change come from peers. Bortz, who still teaches at Stanford, cites the many politicians and marathon runners in their 90’s who are redefining aging and extending the human life span.

“What used to be fate is now choice.”

Changing the message of aging…subliminally