Connecting the young and old in geriatric psychiatry 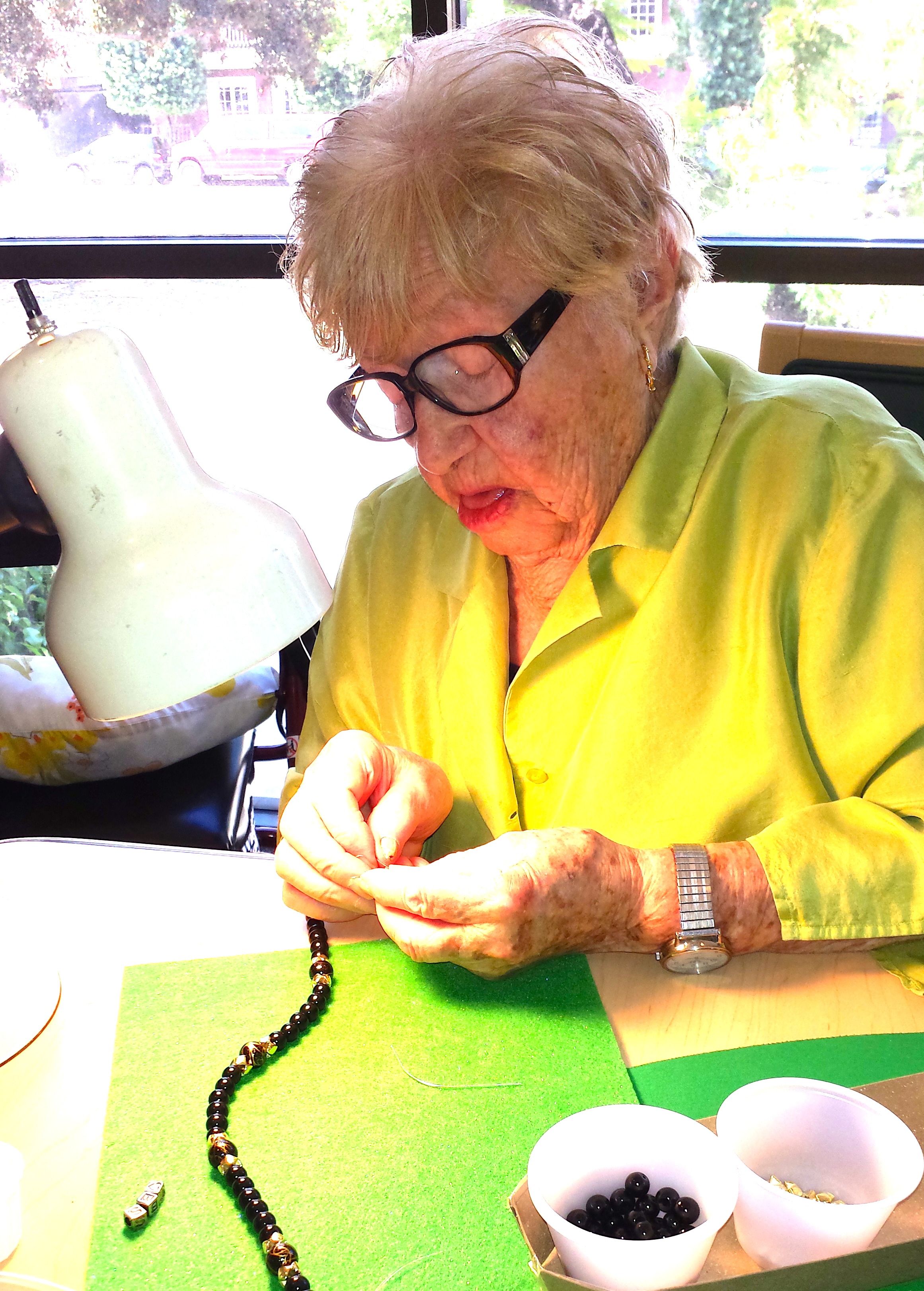 Gelberd sees the problem up close as medical director of Older Adult Services at the Los Angeles County’s Department of Mental Health, which is dealing with the leading edge of a massive wave of Baby Boomers with psychiatric disorders. It’s a population that is expected to double from 7.5 million nationally today to 15 million by 2030.

But while Baby Boomers are at a higher risk for depression, anxiety and substance-use than people born before World War II, the number of mental health specialists to care for them is dwindling. Of about 39,000 psychiatrists in the US, fewer than 2,000 are certified geriatric psychiatrists – just one for every 23,000 older Americans.

“I think the younger you start, the better,” says Gelberd, who supervises geriatric psychiatry fellows as they complete six-month rotations through the county’s mental health program.

Visiting older adults in their homes, where they haven’t gotten “all dolled up to go to the clinic,” can win over fellows who come to visit, Gelberd says, adding: “It’s quite a hit.”

Dilip V. Jeste, MD, a professor at the University of California at San Diego’s School of Medicine, agrees. He asserts that ageism, cuts in Medicare disbursements, and the allure of higher paid specialties have caused the field to shrink.

“Fifteen years ago this was a crisis, and it goes unabated and is getting worse,” he says. He notes that caring for older adults is a specialized arena because they’re not just chronologically older; they have different needs. They may be battling a number of physical and mental illnesses at once, and may taking more than a dozen different medications, while under the care of five different specialists.

Like Gelberd, Jeste is reaching out to future health care providers early on in their medical careers, to mentor them and nudge them toward a sub-specialty in the care of older adults.

As director of the Sam and Rose Stein Institute for Research on Aging at UCSD, Jeste also supervises a summer training institute where paid participants range from high school students to medical residents. Gelberd, on the other hand, worked to create fellowships for post-graduate medical students so they cultivate expertise in the needs of the older patient, which supports her larger goal of training the next generation of young doctors, nurses and social workers “who are not always comfortable working with older adults, or don’t know enough about it.”

Fellows from USC and UCLA come in one or two days a week to work with multidisciplinary consultation teams that include psychiatrists, a public guardian, nurses and others who have experience assessing and treating older adults.

Taya Varteresian MD, Gelberd’s new hire for the GENESIS program, started in early August. It was just two years ago that she completed a six-month rotation as a Geropsychiatry Fellow following a residency in psychiatry at UCLA. Run by the county’s Older Adults Services Bureau, the program took the newly minted doctor into patients’ homes, which Gelberd favors over treating them in a clinic or hospital because it allows doctors to see their patients as they live on a daily basis.

“The no-show rate is very low,” Varteresian jests. “We might hit traffic, but I think this is doing the patients a better service: We see how they live. If we think they have a memory issue, we can see how they look, if there’s food in the fridge, and count their pills to see if they’re taking them. There’s so much more information that we can get [with a home visit] than when they’re in the clinic.”

USC and UCLA fellows get field safety training; learn how to deal with hoarders (“be very respectful of their possessions no matter what it looks or smells like”); and check for signs of neglect, abuse or imminent danger.

The GENESIS program is funded, in part, by Proposition 63, which levies an additional 1 percent or more tax on Californians with incomes of $1 million (and above) to provide state residents with a range of innovative mental health programs and services.

Janice Soto Morales, class of 2017 at the University of Puerto Rico School of Medicine, exhibits a spark of excitement as she describes spending last summer at the Stein Institute. The brunette, who wears tortoise shell glasses and a blue smock, talks via Skype’s video-teleconferencing service from the Caribbean island where she lives.

Her fellowship at UCSD “gave me an opportunity to do clinical research after my first year of medical school,” something she was too busy to do during the term with her heavy class load, she says. In shadowing UCSD’s Daniel Sewell, MD, along with Steven Thorp, PhD, of the San Diego VA Healthcare System, she explored how to assist older adults, such as veterans, in using video-teleconferencing and other technologies to get the support they need while improving access to care. She and the other students get paired with faculty members from UCSD’s Center for Healthy Aging as well as the Stein Institute, based on their interests. High school students are paid minimum wage, while medical students and residents earn $1,800/month.

Prior to her UCSD experience, Soto Morales admits: “I didn’t know that geriatric psychiatry existed,” and now that she does, she says that she’s considering it as a sub-specialty.

Truc Ta, a student at Albany Medical School in New York, and Yash Joshi, who attends Temple School of Medicine in Pennsylvania, have also taken part in the Stein Institute program in recent years. Ta was an intern twice during high school, before his 2014 fellowship.

“I got to do a lot more as an MStar (Medical Student Training in Aging Research),” he says. “Everything I learned in medical school I got to apply” in interactions with patients. His work with UCSD associate professor Debra Kado, MD, a bone health specialist, allowed him to take part in a project directly in line with his interest in hyperkyphosis, when the spine curves and forms a hump.

“I got to go deeper… I got to listen to people’s stories, and know them a bit more on a personal level,” he says of the older adults he spent time with during his fellowship. He noted that he, too, had been somewhat influenced by the stereotype that “older people are alone and sick,” until an older couple came in “really in love and just happy. She told everyone that [her husband was] her knight in shining armor, and she was the one who had severe hyperkyphosis, and it didn’t seem to affect her at all.”

Yash Joshi, who’s pursuing both an MD and PhD in his 7th year at Temple University’s School of Medicine in Philadelphia, was on the lookout for programs that offered “interesting things in Alzheimer’s” when he happened upon the MSTREAM (Medical Student Training and Research Experience in Aging and Mental Health) on UCSD’s website. More than research and training, he noted the soft skills the program helped him cultivate.

“First and foremost [I benefited] from the mentorship. As a student, its hard to know of all the training opportunities out there.” He says the faculty not only told of him of opportunities, but also helped him get to conferences around the country. Joshi keeps in contact with fellows he met through the program, and believes they’ll stay in touch throughout their careers.

Whether or not he goes into a geriatric subspecialty, he says, “You can’t be a complete clinician without understanding the older population, because people are getting older as a whole.”

Karino Prado participated in the 2014 summer research program at UCSD before going into her senior year of high school. She says the experience sensitized her to the shortages in geriatric health care providers. Prado, 16, felt some trepidation in working with older adults with mental health diagnoses, but an outing to an Adult Day Health Care center put her at ease.
They were having an ice cream social, the teen recalls, and as she served dishes of ice cream she got to interact with the older adults and found them pleasant and grateful for her presence.

Jeste knows that part of creating a future work force to care for older adults involves generating good public relations. He and his colleagues screen the film, Over 90 & Loving It, to show Stein Institute fellows that many old people still live fulfilling lives and are well worth the investment.

Varteresian, who has undergraduate and graduate degrees is geriatric studies, started out with a positive perspective on getting older as a little girl: My grandparents [helped] raise me. They… gave me an example of successful aging.”

Connecting the young and old in geriatric psychiatry