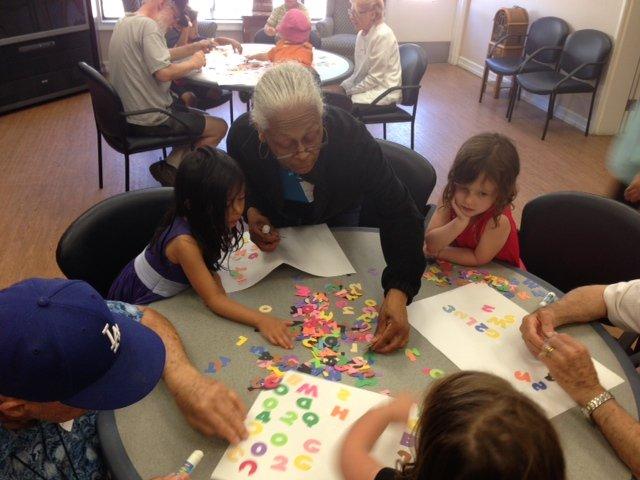 Julie Amerman has attended adult day care for nearly two years at the ONEgeneration facility in Los Angeles’ San Fernando Valley, and she has discovered something important about the program, and herself.

“I feel better when I work with children than I do adults,” says Amerman. “I feel more alive.”

Amerman is part of ONEgeneration’s successful cross-pollination of two distinct day care programs – one for children, the other for older adults – that injects a youthful spark into senior activities while offering children a heightened appreciation for elders at least two generations apart.

The site’s intergenerational activities – which include Volleyball, Cheerio Bracelets, Nature Walks, Card Making, Stamp Art, Puzzles, and Making Lemonade – mean the round activity tables are circled with kids and seniors in alternate seats. An older adult always has a child at each elbow.

By sharing stories and activities, the children – from six weeks to six years – see older adults as normal playmates. Older adults, or “neighbors,” channel their youthful counterparts in a subtle yet readily apparent swap of energy.

“It helps them to feel they have purpose again,” says Anna Swift, program director for adult day care.

Amerman recalls how as a mother in her 30’s, her two daughters would post their art on the refrigerator, inspiring discussions of color and shape. Her experiences here have ignited those memories.

“When a child is given markers or crayons they test to see what the blue looks like, the yellow, the red,” says Amerman, smiling.

On one chilly January morning at ONEgeneration’s Van Nuys headquarters, the older adults have just finished bowling with their three year-old “Lizards” companions, and now watch as staffers distribute plastic knives and fruit for the morning’s second tasty activity – “Smoothies” – alongside the four year-old “Dinosaurs.”

As the pears, bananas, frozen blackberries, and orange juice are delivered by the upbeat yet sometimes quite loud staff – a point of contention for some of the elder participants – the crosstalk is friendly and jocular, and includes gentle ribbing.

“I’m in trouble now,” jokes an elderly man in a baseball cap to the boy next to him. “You want me to cry all day? No? Then I’ll laugh all day.”

Nearby, a woman reaches her hand out to the young girl next to her, touching it softly. The little girl responds, and the two hold hands, then gently play with one another’s fingers. It’s a brief, fleeting moment, but one that offers tactile touch – skin on skin – that older adults frequently lack.

Launched in 1978, ONEgeneration today offers other inter-generational programs as well. For the past decade, it has matched six foster teens with older adults in short classes spanning drumming to creative writing and graffiti art. Its At-Risk Teen Parenting Program sends older adults into local high schools to mentor teen parents and pregnant teens about positive parenting.

Swift, the program director, has her own son Andrew enrolled at ONEgeneration, and on this day he is celebrating his birthday. She says the experience has humanized older adults for him, rather than stereotyped them as old or different.

“He doesn’t seem to notice it,” says Swift. “When he sees people with walkers or wheelchairs, it’s just something he’s always been around.”

Research bears out the program’s influence.

A decade ago, Penn State University investigators studied ONEgeneration and found an intriguing outcome. More than two years after leaving day care, child graduates from the program showed more empathy for older adults (and the disabled) than their peers. They were also more patient.

“They didn’t see someone as older as being different,” says Judy Hamilton-Cantu, president and CEO of ONEgeneration.

In 2007, a Virginia Tech study also found that after interacting with children, older adults not only felt happier, but more engaged, loved, and needed. More than half even felt younger.

Indeed, without the kids around, there’s a palpable shift in energy. Older adults once bright-eyed and energized sit quietly, eyes noticeably dimmer, some with mouths open, awaiting something new to happen.

At adult day care, participation in these inter-generational programs is voluntary and varies greatly among the program’s older adults.

“Some are good with one (activity),” says Temeka Pritchett, intergenerational program coordinator. “But Charlie will do it all day long.”

Carlos – or Charlie as he’s popularly known – is an affable Latino who this morning has already bowled and slurped smoothies, and now sits in the infant room warmly rocking baby River in a wooden rocking chair.

Those older adults like Charlie who join everything will spend up to three hours a day participating in inter-generational events.

“It feels better than doing it with my friends,” blurts Ansel, who later revises his opinion. “I like old people and kids about the same.”

With its annual $4.1 million budget – supported by day care fees, the Los Angeles Department of Aging, and various foundations – ONEgeneration is a large umbrella organization. With a staff of 86, the non-profit supports a senior enrichment center, four congregate dining sites and a home-bound meals program. It also hosts a Sunday farmer’s market.

The day care program is a particular magnet for retired teachers, who see it as an opportunity to connect once again with children.

Hamilton-Cantu says the legacy of ONEgeneration is what the children take with them.

“We hope the children who spend their first five years in the program have a special place in their heart for seniors.”