Program Helps Parents Out of Rehab Connect with Their Kids 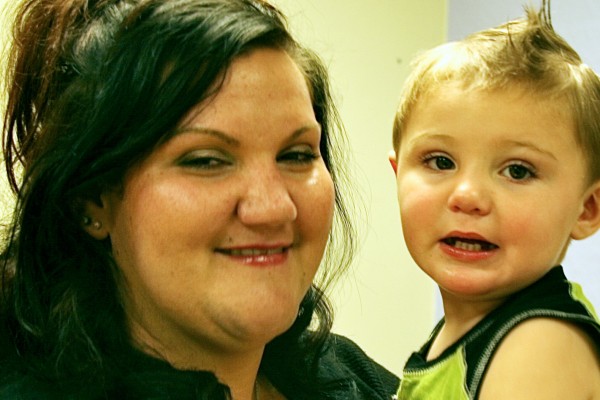 Sebastian rocks a mean muscle shirt and a cocky Mohawk, but he’s not the kind of guy you’d assume is capable of saving a life. “Sebby,” as his loved ones sometimes call him, is only 18 months old and seems to try to eat his mom’s face when they kiss. But his mother, Elizabeth, says the tyke did, indeed, save her life.

She was a methamphetamine addict and recounts losing her job and “living like Bonnie and Clyde” breaking into cars and stores and pulling identity-theft scams with her troubled boyfriend to support their drug habits. Then she discovered she was pregnant with Sebastian. “I think God gives you what you need,” says Elizabeth. She quit using immediately.

Though her efforts to turn her life around proceeded in fits and starts (she ended up later in residential rehab with Sebby at her side), it was the knowledge that she was pregnant that made her chose a new fork in the road. Today the striking, dark-haired mother is a fiercely proud and devoted mom — and clean. “I’m independent now,” she says. “I can do this, by myself.”

Elizabeth has been helped in her transition from recovery to clean parenting through the Next Steps program in Pittsburg in Contra Costa County, which aims to improve recovering parents’ relationships with their young children. The project has provided Elizabeth with a therapist to aid her parenting skills and a “family partner,” as well as connected her to other community services such as Section 8 housing and food banks. Family partners are parents who typically have been through recovery themselves and serve as mentors.

Elizabeth turns to her partner mom for parenting questions because her own mother, who’s an alcoholic, is often inaccessible. Her Next Steps therapist Chrissy Jallad comes once a week to Elizabeth’s home and “gets right down on the floor to play with Sebastian,” says Elizabeth, who’s currently learning how to deal with a common toddler problem: biting. “Chrissy helps me with issues, but at the same time respects my own parenting style,” says Elizabeth. “She doesn’t impose specific values or a certain kind of parenting.”

Elizabeth worries about the challenges her son faces, particularly in light of her own history and his late father’s dark past. Sebastian’s dad, whose already fragile mental health was decimated by long use of methamphetamine, was shot to death by Elizabeth’s mother. He brutally abused Elizabeth while she was pregnant with their son. “It’s on my mind. How am I going to tell my son that his grandmother killed his father because he was abusing his mother? And how am I going to help him deal with it?” Elizabeth asks. “I’m hoping Chrissy can guide me.”

Parenting can be a huge challenge in many ways for moms and dads coming out of rehab. “In some cases, they’ve never really parented before because they’ve been out of it, and not responsive to their children, and have to parent with very little support,” explains Jallad. “Also, raising a child alone can be very stressful for single moms, which can trigger a relapse.”

Some clients in the program have relapsed, but returned for help after another recovery. “We try to bolster our parents’ confidence and focus on parenting skills, coping strategies and positive discipline,” explains Dr. Tina Martin Swift, director of the Next Steps Program.

Children have their own sets of problems from a disordered life, and may act out aggressively when reunited with a parent. Advice to stressed-out parents and children can be very similar, notes Jallad: Walk away, take deep breaths, talk to someone.

The program was launched last year, and served 38 families its first eight months. This year, it’s helping 20 clients. To be eligible for the services, recovering parents must have children under the age of six. The primary client of the program is the child, and project creators believe the most critical aspect of a healthy child’s upbringing is a loving parent with effective rearing skills. The program is funded in part by First 5 (which refers to the first five years of life) Contra Costa of the county’s Children and Families Commission, which is providing $300,000. It’s implemented by Contra Costa Health Services, which pulls in an additional $250,000 from Medi-Cal, and the Contra Costa ARC/Lynn Center.

“There’s an increasing sense of urgency that we have to reach these kids quickly, or we miss our chance. It’s easier to fix a broken child,” she adds, quoting Frederick Douglass, “than to repair broken men. The time to act to help these kids, and their parents, is now.”

Program Helps Parents Out of Rehab Connect with Their Kids