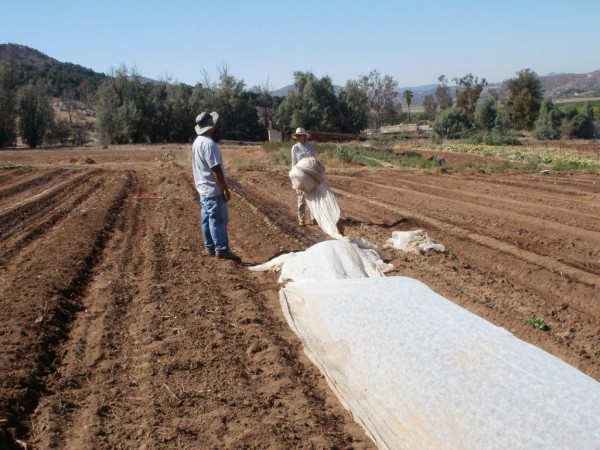 The 14-acre certified organic farm at the south edge of the San Pasqual Academy  is surrounded by commercial farms, orange and grape trees on three sides.

It’s a rich metaphor for the academy itself, an organic local effort that’s meant to anchor its community to healthy food, one that’s grown jobs and centered the way the students live.

And it has been more than a farm. According to San Diego organic farmer Scott Murray, who helped launch the farm, it is a hands on part of what the academy tries to teach its residents, teenagers in the county foster care system who have run out of housing options and are within a few years of aging out of the system.

“We’re here to teach about the world of work and how you take care of yourself and the things you want,” Murray explained. “Most of the kids, their attention span is very short and they have a hard time seeing past the one day of work that is planting.”

“Then, after investing work and commitment and resources and making careful choices, there was the day they harvest and they saw where all they put into this worked,” he said. “We made success teaching them if they worked hard there was something in it for them, maybe not today but soon.”

When it opened its doors in 2000, San Pasqual Academy was the only residential high school for foster youth in the nation. The push for the school began in 1998, guided by then Presiding Judge of the Juvenile Courts James Milliken, who was alarmed by what he saw happening to youth in the foster care system, how the kids were failing school, not finding families, and how when they aged out of the system, they lacked the skills and support to stay out of the system.

He developed a plan with County Supervisors Ron Roberts and Greg Cox, one that started with kids who were permanently in the foster system. The idea: to build a community with a high school in the middle. Twelve years after the academy opened its doors, all three remain involved with the school, which has now graduated more than 1,200 students – many of whom come back during the holidays and summer break from college.

“It’s become a connection for kids who need a connection,” Milliken said. “There’s been some trial and error, it hasn’t worked perfectly all the time but it’s the best option to help these kids become educated, functional adults – it still is.”

The agriculture program, which was started by the former director of Child Protective Services and designed by Murray, is intended to be both a learning experience, a business and a cathartic activity for mostly city kids who are in a big, rural valley for the first time in their lives.

“Food coming through a window in a bag was their definition of special food,” Murray said. “We didn’t expect the kids to become farmers. We wanted them to see where the work and the cooperation meant that they could get to a positive outcome.”

The school has a better than 80 percent graduation rate with about half going on to college. By comparison, recent studies of California foster youth find that just less than half graduate from high school and less than 20 percent attend college.

“I’m very proud of what the students and staff of San Pasqual Academy have achieved for themselves and the county,” said Roberts. “Plus they grow great corn.”

The farm has been in production since 2008. Murray helped set up a system where students who work on the farm receive school credit and credit as job experience, as well as income through the Work Force Partnership.

“We’re in this agriculturally rich and resource-rich valley, and our farm is way to be part of that community, to be a good neighbor,” Staalberg said. “Most of the food stays here, but we sell bumper crops, watermelon and corn, to Jimbo’s (organic grocery chain), the People’s Co-op in Ocean Beach and  Seaside Market in Cardiff.”

With the cool season almost here, Staalberg and the garden’s two workers, Marco Caballero and Joseph Balistreri are planting lettuce, cilantro, garlic and other winter crops in the field that just a month ago was bursting with watermelon.

“We’re still learning, we still make mistakes,” she said. “Last year was a real learning curve – we tried to start a little early and then we ran into the Santa Ana [winds and heat] and our tender young cool season plants were wiped out.”

Most of the produce – squash, peppers, corn, kale, lettuce and herbs, stay at the academy to be served in the cafeteria.

“Our goal is to provide as much produce to the cafeteria here as possible – right now we’re still only supplementing, but we’re moving in the direction we want to go,”  Staalberg said. “Since January, we’ve grown over 3,000 pounds of food for the cafeteria.”

This year’s crop includes Brussels  sprouts and chard, and academy chef Johnny Ellison is looking forward to cooking with them.

“We got the best thing going now that we got our own farm-to-table right here,” the chef said, taking a break from preparing a marinade. “The new government school regulations require a lot of fresh vegetables and we are at an advantage because we have them here and they’re actually really good tasting.”

Ellison said that the kids eat more vegetables when they know the food began just steps away.

“It gives the kids the opportunity to see where their food comes from and when you do, you feel good about eating it,” he said. “They take pride in eating food that’s ours.”

“But our goal isn’t to compete and form a business,” she explained. “It’s to provide healthy food for our students, and practice at running a farm – the planning, hard and steady working of the land, the wonderful feeling of a harvest, for our kids.”