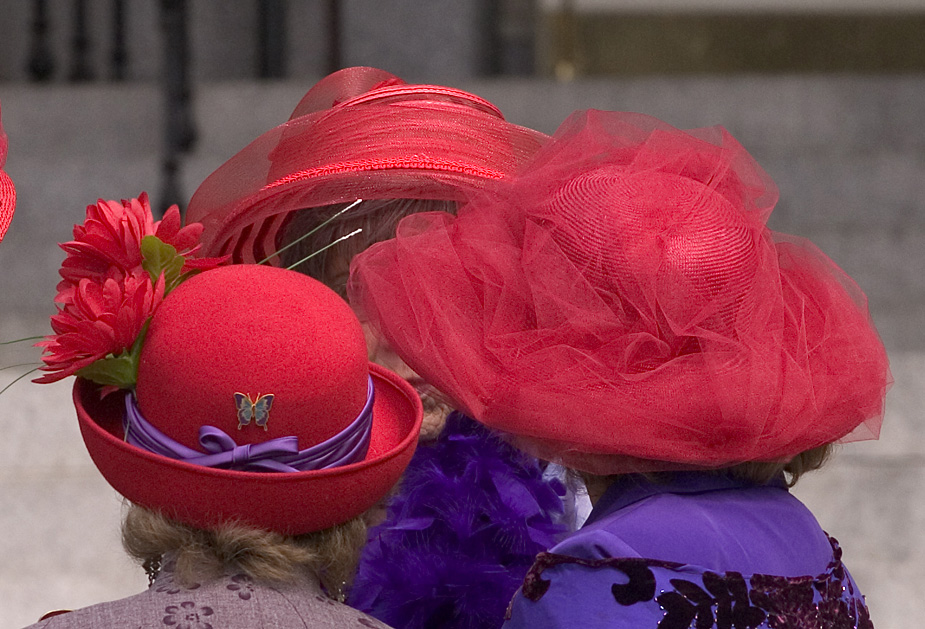 They call themselves “hatters,” their headquarters are the “hatquarters,” and they wear their purple outfits and red hats with serious “hatitude.”

But more than anything else, these women over 50 embrace life with an important rule for positive aging: have fun.

At first, they celebrated just two F’s: fun and friendship. But like everything else about The Red Hat Society, things got a whole lot bigger, and those two F’s quickly blossomed into five: fun, friendship, freedom, fulfillment, and fitness.

Spawned as a twinkle in the eye of founder Sue Ellen Cooper, these proudly mad hatters have grown into a worldwide sisterhood of 20,000 chapters and an estimated half million members who strut, prowl, laugh, cry, and declare their lust for life.

In the late 90’s, Cooper looked around her at women in the second half of their lives, and didn’t like what she saw: uncertainty, despair, and untapped talent.

These women had raised families and coddled husbands, but were often unsure what to do next.

“I missed being with peers, especially women,” says Kathleen Dillon of Anaheim. “I missed women and laughter.”

“We’ve raised our kids and did the volunteer work up to here, and now it’s time for fun,” echoes Patricia Phaneuf, a Red Hat member for the past decade.

Helping the Fullerton-based society celebrate its 15th anniversary this year, both women are attending a September convention of 160 chapter heads – called Queens – who are regaled over three days with events in posh Newport Beach, California.

During check-in at the Sheraton Hotel, the hatters wear their signature red hats and purple clothing – some sporting shocks of purple dye in their hair – their positive energy clearly contagious.

At Saturday night’s dance party the women fill the dance floor to songs ranging from the Cupid Shuffle to the anthem “Girls Just Want to Have Fun.”

At home, chapter events can be planned or spontaneous, and are only limited by the members’ imaginations: they include tea parties, chocolate parties, backwards parties and road trips – often involving trains. One chapter even held its own wedding party the day Prince William and Princess Kate were married across the pond.

And in the bold spirit of adventure, sometimes the color red veers towards the blue.

Phaneuf was celebrating a friend’s birthday at Chippendale’s when she first eyed Red Hat members ogling male strippers nearby. She joined the Crescenta Scarlet Slippers (joking they should be renamed “sippers”) and eventually recruited eight more members. The cheeky chapter eventually received an intriguing invitation from a surprise source: a brothel madam in Nevada, who gave the curious women a tour of the facility and its menu offerings.

“I saw women coming out of a tea house and they looked so beautiful,” she recalls fondly.

Inspired, Phillips then started her own chapter in Reno, and after a news story about it “others started popping up all over.”

Besides bowling, balloon races and shopping, Phillips says her reason for being a red hatter is quite simple.

“I like to play dress up because I’m a church girl and I like hats,” she states.

Alice Davey belonged to a traditional Red Hat chapter, but some of her fellow members craved something more extravagant.

“We wanted a high glitz (chapter) with lots of bling,” she says. “When we walked into the room we wanted everybody to notice us.”

Basic membership in the Red Hat Society is $20 a year. While members over 50 are Red Hatters, women under 50 can still join as Pink Hatters.

Although the society targets fun, members’ lives are often touched by tragedy: divorce, a cancer diagnosis, or a spouse’s death.

When Phaneuf’s husband died in 2006, her Red Hat sisters swooped in and took care of her.

“They made sure I didn’t have any lonesome time,” she says.

“I was so thankful for the Red Hatters because they did everything,” echoes her daughter Cathy Rydall.

The 2012 “Red Hatter of the Year,” Barbara Lesiak, recalls her father’s nursing home, and how the women there struggled for identity and meaning.

“They just want to dress up, feel good, and talk about their experiences,” she says. “And nobody was listening to them.”

Lesiak signed up 20 women there to her chapter and held a variety of events for them, including teas, Halloween parties, and entertainment.

The great success of the Red Hat Society has spawned conventions, cruises, a musical, and that most important pop culture stamp of approval: a reference on The Simpsons.

Known in typical Red Hat fashion as the Exalted Queen Mother, Cooper modestly compares herself to Forrest Gump, who started a movement without realizing it.

While she doesn’t know exactly how the society will grow, she is clear about the philosophy of its members.