Doctors to Check for Domestic Abuse During Regular Exams 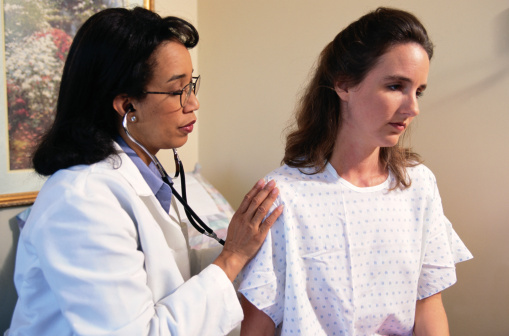 Studies show that the majority of Californians — as many as two-thirds — don’t know where to turn for help if they, or someone they care about, is a victim of domestic violence.

Meanwhile, research shows that 44 percent of adult women suffer domestic abuse at some point in their lives, according to figures from Kaiser Permanente.

But a new provision of the Affordable Care Act could change those estimates, and soon. As of Jan. 1, health care providers will begin screening all women during regular checkups for signs of domestic abuse.

Ideally, this will result in more victims being identified and receiving the help and care they need to end physically and emotionally violent relationships.

Because that trust is there, McCaw said, doctors are in a unique position to warn a patient if her relationship issues are forms of abuse; reassure her that she is not alone; and guide her toward help.

Most victims of domestic violence are women, McCaw said, although men suffer from domestic abuse as well.

A study released Oct. 29 by Tulchin Research of San Francisco, and commissioned by the Blue Shield of California Foundation, showed that California residents are behind this new doctor requirement.

“Clearly there’s strong support for having doctors and nurses intervene,” said Ben Tulchin, president of Tulchin Research. Key findings of the study include:

The survey included responses from 800 adults around California, and was conducted in English and Spanish on both landlines and cell phones. The survey was done from Oct. 8-15, in honor of October being Domestic Violence Awareness Month.

Tulchin said the results showed that Californians support doctors and nurses getting involved to stop and prevent abuse before it escalates to the point where police are called, he said.

“People don’t really know how to get help,” Tulchin said. “Once you call the police, it’s too late. There’s no prevention at that point because it’s already happened.”

Getting doctors and nurses involved, he said, “is not a silver bullet, but it definitely helps.”

Still, some are wary that the mandate will be one more burden for already-taxed health care providers, and may not be as effective as supporters hope.

“It’s exciting to me on one hand to have that outlet for women who they either are not comfortable or just don’t know about the (domestic violence prevention) resources,” said Jennifer O’Brien-Rojo, executive director at Walnut Avenue Women’s Shelter in Santa Cruz.

But, O’Brien-Rojo said, she worries about burdening overtaxed doctors with another exam requirement without more money to accompany it.

In a perfect world, O’Brien-Rojo said, every health care office could be staffed with a domestic violence victim advocate who could see patients immediately if doctors sense signs of abuse.

“Not that (health care providers) don’t care, but they have a lot on their plate. We’re going to need to get the medical community resources and help in order for this to really work,” O’Brien-Rojo said.

At Kaiser Permanente, McCaw said she is working on exactly that.

The first step, when a patient confides that she is being abused, is for doctors to thank her for sharing the information, McCaw said.

“How that information is received is important,” she said.

She encourages doctors to educate patients on how domestic violence can trigger insomnia, depression, anxiety and a host of other chronic physical conditions, McCaw said. She also makes sure they know how to offer information on local advocacy groups, hotlines, and referrals to social services or another health provider.
“What we can do in the health care environment is offer resources and provide early intervention so it doesn’t get to the point where we have injury,” McCaw said. Often, she said, a victim misinterprets early signs of abuse as normal jealousy or exclusivity until it’s too late.

That misinterpretation is understandable, McCaw said: “there’s not much out there in the media or on TV that would help provide that information.”

At Blue Shield of California Foundation, President and CEO Peter Long said he hopes the survey findings will help Californians see domestic violence as both a health issue and a law enforcement issue.

“Two-thirds of adults in the state don’t know where they can get help” for domestic violence, Long said. “That means we have a fair amount of work to do.”

Do you or does someone you know need help with domestic violence? Contact one or more of the following groups:

Note: The Blue Shield of California Foundation is a financial sponsor of www.calhealthreport.org

Doctors to Check for Domestic Abuse During Regular Exams