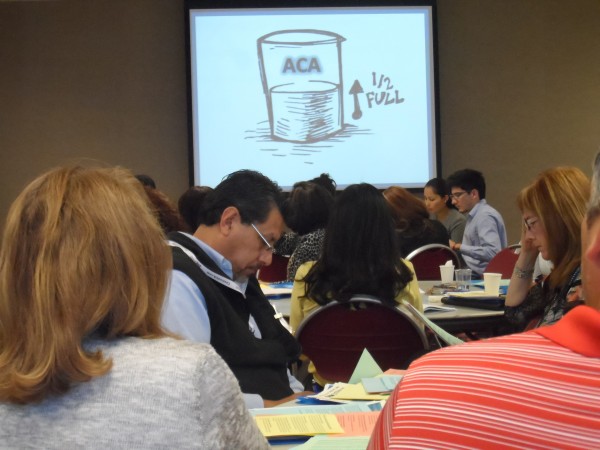 More than 100 Santa Cruz County residents responded to a recent call to learn more about the Affordable Care Act (ACA) so they can in turn educate their friends, neighbors, co-workers and patrons about health care reform.

Librarians, accountants, builders and non-profit staff members were among those who attended “Be a Champion for Expanded Coverage,” an event sponsored by the Health Improvement Partnership (HIP) of Santa Cruz County at the Watsonville Civic Plaza.

The volunteers plan to help solve one of the more vexing questions of reform: how to reach the many people who don’t understand they are eligible for subsidies on the exchange or the expansion of Medi-Cal and then help them navigate the process of signing up for insurance.

HIP’s plan is to create an online network of community members who could be updated as the implementation of Covered California evolves and who could provide HIP feedback via an online bulletin board about questions consumers are asking, said Eleanor Littman, Executive Director of HIP.

The partnership wants to educate people and organizations in the community who come into contact with a lot of uninsured adults, Littman said. Once the volunteers have a basic understanding of Covered California, the state’s new health insurance exchange, they can help people better understand how to enroll.

“Maybe it’s the person at the front desk or in the human resources department who has the opportunity to change the culture and help people try this out,” Littman said.

Barbara Knirlberger, who owns her own financial services business in Capitola serving mostly small business clients, attended the event. She also volunteers for nonprofits and she plans to use the knowledge she gained to explain the ACA to others. HIP even supplied attendees with Covered California “business cards” to pass out to people.

Julie Richardson, a reference librarian for Santa Cruz County Public Libraries, was one of three local librarians who attended the event. Finding a list of organizations ready and able to help people access Covered California has been a challenge, she said.

Just being at the meeting, gaining personal knowledge of the organizations available will help a lot when she’s referring people, she said.

She’d like to see the library provide space once or twice a week for certified volunteers to help people through the enrollment process, as the library does at tax time.

Although Covered California has a website meant to make enrollment a relatively simple process, getting out the message that people can buy insurance online for themselves is still a major work in progress. And many people will still need help navigating the site.

Covered California is training organizations to become Certified Enrollment Entities, which will help people chose and buy insurance on the site. But only certain types of entities such as community clinics, community colleges and universities, labor unions, churches, non-profit community organizations, tax preparers and school districts are eligible to offer enrollment help.

In Santa Cruz County an estimated 8,600 people will be newly eligible for Medi-Cal under the ACA, which has expanded Medi-Cal to cover people earning less than 138 percent of the federal poverty level. For a family of four that’s an annual household income of less than $32,500. And 20,000 residents will be eligible for a federal subsidy to buy insurance on the exchange, said Cecilia Espinola , director of the County of Santa Cruz Human Services Department.

Those subsidies will go to individuals who make between $15,860 and $45,960 and to families of four earning between $32,500 and $94,200 if they don’t get insurance through their employers. But informing everyone of what they would qualify for and getting them to explore their options is the tricky part.

“It’s not just community conversations that are needed but lunch and dinner conversations,” Espinola said. Getting people who have pre-existing conditions or who have lost their jobs to sign up on the exchange is not going to be the challenge.

“It’s those folks who are healthy and have to make a budget decision. Insurance is always hard for people,” she said. “You really need those people, in any insurance pool, who are healthy to sign up and engage in preventative behavior, like healthy checkups, and model that for their children, friends and neighbors.”

Gerardo Valaquez, a community advocate for Manzana Community Resources, a community resource center in Watsonville, was recruited to be a facilitator at HIP’s “Be a Champion” event. Many of the people his organization serves are Spanish-speakers working in agriculture or retail, often in very labor intensive jobs where they are prone to injury. Many of them don’t have insurance and they wait until they are really sick to go the emergency room, he said.

Many of them also are unaware that they will be eligible for insurance at no cost to them through federal subsidies, he said.

Covered California issued $43 million in outreach and education grants in May, including $500,000 to the County of Santa Cruz Human Services Department.to do outreach in Santa Cruz, Monterey and San Benito counties

“The law isn’t perfect,” Espinola said. “But despite all the craziness in D.C., this is hope.”