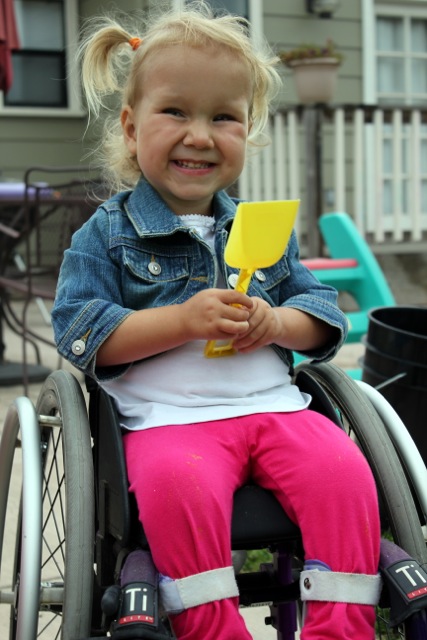 If the playground is the great training ground for life, children like Tatum Bakker are missing crucial lessons. Tatum, now 2 ½, was born with Spina Bifida, a spinal cord malformation that causes partial paralysis. She can’t get around without the help of her parents or a wheelchair.

Normally, her mother Amanda Bakker says, trips to the park end in tears. “I describe it like the kid who broke his arm and has to sit on the sidelines while his friends swim.” As her older siblings run and play, Tatum’s wheels get bogged down in the wood chips, and once near the structure, there are few places her chair can go.

While on a family trip with their three children to Idaho, the Bakker family stopped at a different kind of playground: one with no wood chips and accessible equipment. It had poured rubber surfaces, gently sloping ramps and supported swings. Tatum was able to play like any other child. It was a revelation.

When they got home, the Bakkers began reading about the developmental and motor benefits of play for young children. They also began to track how many, or few, universal access playgrounds exist in the United States. The nearest one was 100 miles away. They vowed they would build a playground in their hometown of Salinas for children like Tatum.

A year later, the city of Salinas has donated 4 acres of land, and private donors and foundations have given more that $900,000 for materials. It’s called “Tatum’s Garden”. Recently, 3,000 volunteers, from local firefighters to churches and civic clubs spent 9 days with hammers, saws, and rakes working to build the structures.

The playground is the only place within a 250-mile radius with activities for hearing and visually impaired children. “In our entrance walkway, “Amanda Bakker explained, “there is a beautiful 3-D mural in relief of all the fruits and vegetables we grow here in Salinas and underneath that is the word broccoli and it’s also there in braille.” The Bakkers worked with Leathers, a design company that listened to their ideas, and helped turn them into playhouses, ramps, swings and slides.

Bakker said there are features that vibrate for hearing impaired kids. “We have some outdoor musical instruments that are permanent fixtures and they can feel those vibrations. We also have bouncy bridges and platforms and things like that.” There are rope ladders and climbing walls for the more adventurous. The whole point is to create a place where children of all abilities can play together.

The kind of semi-supervised, imaginative play that children do at playgrounds has been linked to higher performance on intelligence tests, stronger language skills and better performance on math tests. In the social realm, preschoolers who do cooperative play are better able to solve interpersonal problems and tend to be better liked by their peers. Conversely, children who lack social play have been shown by studies to be at risk for developing social and emotional problems later in life, including school dropout, delinquency, aggression, depression, low self-esteem and loneliness.

“Brain development is stymied when kids don’t have the ability to actively move themselves around in space,” said David Kramer-Urner, Director of Physical Therapy for Children’s Services in Santa Cruz County. “A lot of the kids we work with that are completely wheelchair bound and they didn’t develop the ability to motor-plan. This the ability to plan ahead about how one is going to approach a physical task.” He believes playgrounds like Tatum’s Garden will offer more opportunities for this kind of practice.

Valencia Elementary School in Aptos, Calif. has had an adaptive playground for about two years. Special Education Teacher Julie Malcolm says she notices a marked difference in the behavior of students who have been on the swings at recess, especially those in wheelchairs. “They are calmer, more focused on learning,” she said. “The younger they are, the harder it is for children to sit still. For children in wheelchairs most of the time, physical and make-believe play is even more crucial to their development.”

She says playing on structures teaches things they could never learn in the classroom. “They learn about how gravity works first hand. They have to maneuver their chairs around three difficult turns. They gain confidence and a sense of ‘Oh, I can do this, too!’ They also learn about the social world through play.”

Malcolm says the whole school benefits from having these kids on the playground. “The other students learn to be kind, and to understand that they’re kids and like to have fun, too. “

Cece Pinheiro runs a nonprofit called Special Parents Information Network in Santa Cruz, which assists parents with disabled children. “All kids are created equal in their curiosity,” Pinheiro said. “ It is important for them to not only have access to but inclusiveness in all things play. This is what accessible playgrounds provide.”

Julie Malcolm feels that play is an endangered pastime, squeezed out by the fervor for reading by 1st grade and the emphasis on test scores. She hopes schools and cities will recognize the importance of play to the brain development of all children.

And what does Amanda Bakker think her daughter will do on opening day of Tatum’s Garden? “I think it will be sheer joy and that pure excitement of a child who can in her own way run after her brother and sister and enjoy that freedom of imagination of play,”said Bakker. “ I am excited to watch her from a park bench and know she is having fun like any other kid.”