Instead of prison, felons get jail and rehab 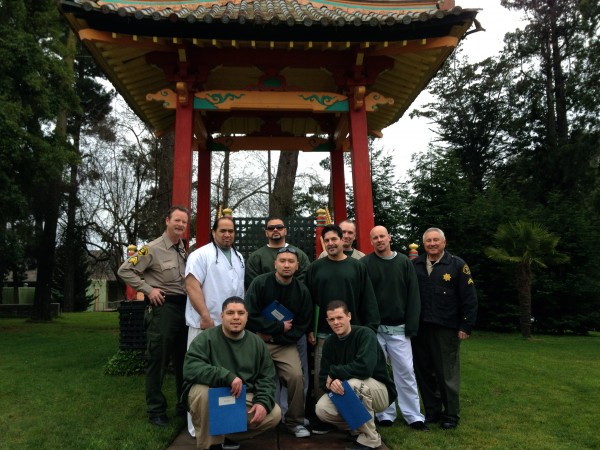 Larry Gardner was a drug dealer and user for 25 years. At age 41, incarcerated again after a long string of jail sentences, he’s ready to change — with help from a new program in Santa Cruz County called R.I.S.E. The program aims to help people like him improve their chances of success – and make it less likely that they’ll end up back in prison or jail.

Gardner is one of 129 convicted felons who have become the responsibility of Santa Cruz County since the state instituted sweeping criminal justice reforms in October 2011. That was when California started transferring responsibility for certain non-serious, non-sex and non-violent offenders to the county to reduce prison overcrowding.

Counties were given funding to manage the new felons and could choose how to spend it. Some counties have used it to expand their jails, others have expanded rehabilitation options, and some have chosen to do both. Santa Cruz has opted to invest in 16 treatment and intervention programs to keep offenders from coming back to jail.

R.I.S.E., (Reclaiming Integrity, Self Awareness and Empowerment,) is one of those. It operates out of the Rountree Medium Facility, a medium security jail in Watsonville.

Just three in ten Gemma graduates commit another offense within three years after being released from jail, compared to a national rate of seven in 10, said Cynthia Chase, Program Director for Gemma and R.I.S.E.

The state funding that came with criminal justice reform allowed Gemma to start R.I.S.E for men. The program also works with the sheriff’s office and the probation department.

At a year old and with only 50 participants so far, R.I.S.E. still has to prove itself.

The program has one staff member, program coordinator Jason Murphy, who blends in well with the inmates given his tattoos and his past incarceration in Santa Cruz County.

“What makes the R.I.S.E. program is Jason. He can speak their language. They find they can trust him and that’s huge in this business,” said Louie Hevia, Inmate and Programs Liaison Officer at Rountree.

“It’s a close knit community and we consider Jason part of our class,” said Gardner.

Along with his personal experience, Murphy draws from an educational background in counseling psychology, psycho pharmacology and mindfulness-based stress reduction.

“I blend Eastern practices with Western psychodynamic theory,” he said.

R.I.S.E. is designed for three 10-week phases. The first phase focuses on mind work. Participants start by taking responsibility for their actions, identifying problems and habitual behaviors, and learning how their brains work neurologically.

For instance, if people suffer from trauma due to a history of abuse, triggers can cause part of the brain to physically swell and become more hypersensitive under stress. And that in turn can trigger risky or addictive behavior.

“What if you have a panic attack every time someone slams a door?” Murphy asks.

To help them take control of and change the way they react to situations, he teaches his students mindfulness-based stress reduction, an evidence-based approach.

“It’s learning how not to jump into fight or flight response,” he said.

Michael Nickerson, 55, is a third-time offender who just completed an 11-month sentence on May 6. This time he was in for a probation violation, resisting arrest and other offenses.

Before his release he was in phase two of the R.I.S.E. program, which continues with some of the emotional work from phase one, but focuses more on vocational issues like resume writing, job skill readiness, mock interviews and answering that tough question about convictions. There is some computer skill training, as well as classes addressing diet, overall health, family strengthening and positive discipline.

Nickerson said he was uncomfortable at first with the group sessions in phase one when he started R.I.S.E.

“As the class progressed we formed a brotherhood, we trusted each other and became open with each other,” he said. He said it’s been a good source of life skills.

“I absolutely can stay clean when I get out. My mind is set on it,” he said.

If Nickerson succeeds, he will be bucking the trend in a state where slightly more than 65 percent of felons return to prison within three years, according to the most recent information reported by the California Department of Corrections and Rehabilitation.

But graduates of the Gemma program demonstrate that a desire to change can make a difference, even when the road to recovery is bumpy.

Clare Geyer spiraled into heroin addiction and homelessness and was living in the woods before she went to jail, which led her to Gemma. After 16 months of hard introspective work, she relapsed. But it was such a horrible experience she hasn’t used drugs since, she said.

“I spent so much time working on myself at Gemma and securing a life I’m proud of… there was no spot for the drugs to go in and fill and make me feel better,” she said.

Now living in a studio apartment with a full-time job as a quality control inspector at a vitamin company, Geyer will also start working as a part-time Gemma house manager.

Another Gemma graduate, Hannah Hughes, was a methamphetamine addict, which led to theft and jail. She’s been clean and sober for 15 months, has a waitress job and is back in college. She now teaches a class at Gemma.

Hughes said a lot of the R.I.S.E. graduates were friends of hers when she was doing drugs.

“I’ve seen guys who I never in a million years thought would get clean and sober and they’re going out and getting jobs,” she said.

R.I.S.E.’s $110,000 annual budget is being funded by the roughly $5.2 million the state gave the county this fiscal year to manage felons.

“It’s a lot cheaper than prison,” said Scott MacDonald, chief probation officer for Santa Cruz County. “California’s prison population has quintupled over the last 30 years and a lot of that is a result of adding time for drug offenders, which has not had any discernable impact on crime,” he said.

“We’ve got into a punishment frenzy and it’s bankrupted our prison system.”

“The problem with our system is we take people who have been traumatized throughout their lives and put them in an institution that retraumatizes them and expects them to come out differently. That’s the insanity of it,” Chase said.

One of the things that Gemma and R.I.S.E. facilitators drive home to participants is that they need to be connected to other people to heal. The programs are based on mentorship.

“We tell people you’re not just in it for you, you’re laying the path for others,” Chase said.

Phase three of the R.I.S.E. program was intended to include some job training, such as using the jail kitchen to provide culinary classes. But there’s no funding yet for that.

The Sheriff’s office plans to apply for $24 million of funding created by Senate Bill 1022 to renovate a former minimum security facility next to the Rountree jail to give about 50 inmates their own rooms with space for R.I.S.E. programs, college prep and vocational programs like bike maintenance, horticulture and computers, said Johnson.

“The problem is we get these guys for three and half hours [three days a week] and then they go back and get reinfected with the gang mentality and peer pressure,” Hevia said. It would be ideal to have the R.I.S.E. participants living full-time next door, he said.

Gardner, due to be released in December, says he’s done with jail. He made up his mind when he signed the application for R.I.S.E. He plans to finish college, where he’s studied sociology and psychology.

“I want to reach people before they get to my age,” he said. “My father went to prison when I was nine months old. He passed away in prison. They tell me like father like son. That’s the reason I have to change this.”

Instead of prison, felons get jail and rehab