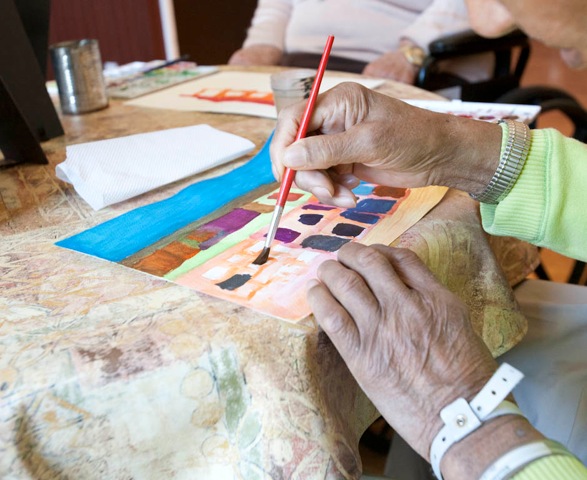 Glacier Circle, an innovative co-housing community for seniors in northwest Davis, all started with a question 10 years ago.

Ellen Coppock, now 86, asked members of her women’s group, “How do we support each other as we age?” Many of them wanted to downsize from the homes in which they’d raised families and were looking for a living situation that would provide a sense of community as they aged while still allowing independence.

So after many meetings with people who had known each other for decades as members of the Unitarian Universalist Church, and the help of fellow church member Virginia Thigpen, a retired developer and contractor, 12 people committed to building Glacier Circle. The group then took on the formidable task of buying land, hiring an architectural firm and contractor, and making all the decisions required to build a community of eight homes.

Glacier Circle, now 6 years old, consists of three buildings connected by a shaded and landscaped courtyard at one end and a fountain at the other. A winding path edged by trees and greenery leads to the homes, four each in two buildings that face each other, with a common house anchoring the community and serving as its face to the street. Residents own their own homes and pay a monthly fee for such costs as landscaping and upkeep on the common house.

The two‐bedroom homes have features that accommodate the needs of seniors, including 3‐foot doorways large enough for walkers and wheelchairs to pass through, plenty of natural light from windows and skylights and grab bars in the bathrooms. Each home has a patio in the back and a one‐car garage. Two of the eight homes are two‐story and can be retrofitted for chair lifts.

The homes range in size, says Davis architect Julie Haney, from the smallest, 1,023 square feet, to the largest, 1,536 square feet. She worked at Macaulay + Architects of Sacramento when she designed Glacier Circle and now has her own firm, JMH Architecture in Davis.

The common house, with an 891‐square‐foot apartment on the second floor for a caretaker, has 1,435 square feet. It includes an office for part‐time administrator Karen Klussendorf, a living room in which residents hold “sharing” and business meetings, and a small fitness room. It also has a large kitchen and dining area in which residents gather at a round table three times a week for meals prepared by a chef.

Finding the land and fitting everything onto the .83‐acre site was a challenge, Haney recalls. “I had to really work to squeeze it in.” But the project held special meaning for her. Haney’s parents were dying as she worked on Glacier Circle, “so instead of losing two parents, I gained 12 others,” she says. “They helped me adjust to not having parents.”

Because Haney had lived in Denmark, where co‐housing is common, the idea of neighbors living in such close proximity didn’t seem unusual to her. And yet she acknowledges that it’s not for everyone. She spoke with a woman who had lived in a similar situation and complained that residents didn’t get along and were very judgmental.

“You need a solid core group to pull it off,” Haney says.

Stan Dawson, 81, and his wife, Peggy Northup‐Dawson, have lived in Glacier Circle since Day One. He serves as president of the board and says an “essential element” to making such a community work is that the residents “knew each other, we’re all

Universalists.” Some of them have been friends for 50 years, he points out.

Joan Stek, 84, moved into Glacier Circle with her husband, John, in the first year it was built. The retired physician says that when her husband became ill and died in fall 2010, she appreciated the love she felt from her neighbors in the community. “It does help to have support.”

“You’re not lonely,” notes Coppock. Having such fellowship can impact health, according to a study by Cornell University that was published in the March issue of Psychology and Aging. Perceived loneliness was assessed in two groups: 91 people whose ages ranged from 18 to 30 and 91 from ages 65 to 80. Then both groups gave a speech and did arithmetic mentally in a laboratory.

Afterward, the seniors measured higher in resting blood pressure and cardiovascular stress reactivity and had longer cardiovascular recovery times than the younger adults.

An account of the study in Cornell’s April 30 Chronicle Online says: “Loneliness increased each of these measures but had even greater negative effects in older adults, putting them at the greatest risk. The recovery time of the lonely older adults, on average, was so delayed, they did not return to baseline levels during the two‐hour‐long follow‐up period.”

While Glacier Circle provides ready companionship, solitude is not far away. “It’s pretty easy to back off,” says Dawson, and spend alone time in your individual home.

Reaching that balance was an issue that was addressed before the community began, he says, by having an expert in group relationships work with the members.

And once Glacier Circle was a reality, someone spoke to the residents about methods for organizing a business. Committees were set up, such as for finance, the common house, landscape, caring/health and fun, so that responsibilities were divided between the homeowners.

“We don’t promise to do any better” than neighbors in any other kind of community, says Coppock.

But Glacier Circle’s covenant illustrates the kind of neighbors these residents are. It reads, in part, we will “listen deeply and thoughtfully in our dialogs, mindful that our relationships are sacred … we will remember to assume the good intent of others and strive to treat other members as well as ourselves with loving kindness.”