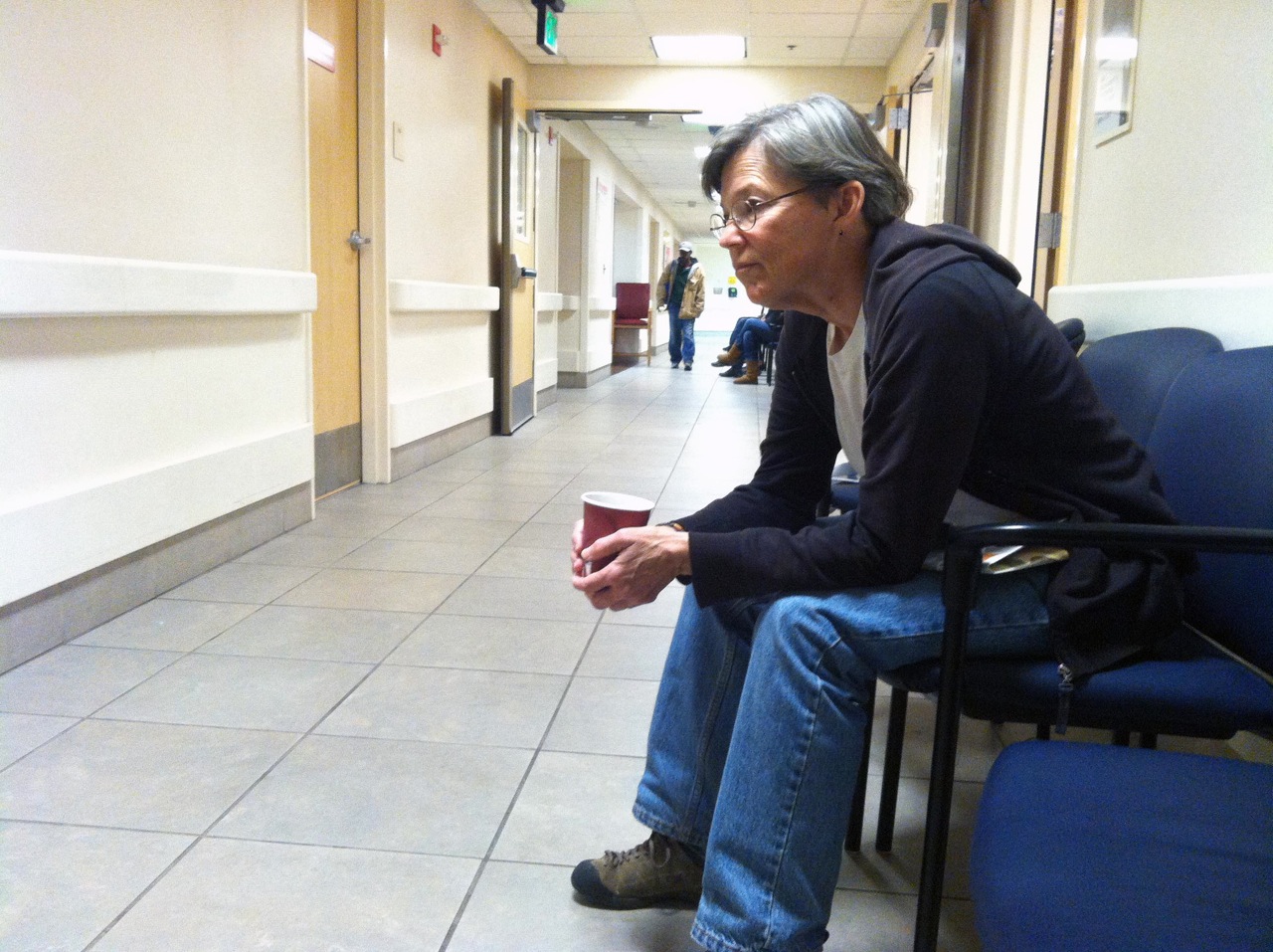 Olivia Destandau was a graphic designer working in San Francisco when a car running a stop sign crushed her body against the left side of her scooter, tearing the major tendons along the outside of her leg. Thanks to immediate surgery she was soon walking, but the impact left her with severe nerve damage. The ache in her leg nagged upward, punctuated by erratic twinges in her shoulder and neck, and never stopped.

That was 1995. Destandau, now 62, learned to mute the pain with high dose opiates. She was prescribed Vicodin or Oxycontin, depending on her doctor’s inclination. The pain kept pace, though, as if it learned to outmaneuver the drugs. But last year, a different doctor disrupted Destandau’s unhappy pharmaceutical routine.

Uninsured and anxious about her dwindling Vicodin supply, she went to the emergency room of Highland Hospital, the go-to hospital for Oakland’s low-income residents. They had launched a new clinic that embraced a sort of maverick program, including a different medication for chronic pain, called buprenorphine.

Commonly known as an “addiction drug,” buprenorphine is rarely used for chronic pain in the U.S. Destandau stumbled into one of a few clinics in the country that would offer buprenorphine to her, a patient with no history of substance abuse.

After years of strategizing, Highland administrators departed from convention with the Pain Management and Functional Restoration Clinic. Both chronic pain and opiate addiction are endemic in the low-income communities that make up their patient base. They wanted to address the first problem adequately, without adding to the second.

Howard Kornfeld, the Highland pain clinic’s flagship physician, persuaded hospital administrators to adopt buprenorphine as the core pharmaceutical option. It could kill two birds with one stone, he said: effective for pain but far less habit-forming than other opiates.

“Buprenorphine has been, next to methadone, the sort of light at the end of the tunnel,” says Kornfeld. “Maybe this can help us solve the addiction problem.”

About half of the clinic’s 85 patients are taking or transitioning to buprenorphine—and results have been heartening.

Like many people with chronic pain, Destandau wanted to break her dependence of heavy dose opiates. They felt like a shackle. She found that buprenorphine, a partial opiate, doesn’t reproduce the roller coaster of pain and reprieve typical of full opiates.

The FDA approved buprenorphine in 2002—not for the treatment of pain, but rather for opiate addiction. Buprenorphine, which scientists refer to as a “partial opioid-agonist,” has proven effective in curbing cravings and reducing relapse to heroin. The drug is pharmacologically unique: it can ease pain while muting the euphoric blast produced by full opiates.

But buprenorphine is branded in the U.S. as an addiction medicine, and its possibilities for pain are often overlooked.

When it was discovered in the 1970s, some christened buprenorphine the Holy Grail of opiate pharmacology. It fastens to the brain’s opiate receptors tightly, inhibiting dopamine from flooding the bloodstream. Scientists label this the “ceiling effect.” Taking more buprenorphine won’t heighten opiatic sensations. The reduced euphoria lowers its potential for abuse or overdose. This has led many researchers to identify buprenorphine, ideally combined with cognitive therapy and social support, as a key to resolving a major medical controversy.

“In medical school, doctors are taught to treat acute pain with opioids. But when pain becomes chronic, you start having problems,” says Dr. Steven Grinstead, a psychologist who trains professionals in the treatment of chronic pain and addictive disorders.

Full opiates like Vicodin and Oxycontin are medically useful. The surge of optimism produces swift, albeit temporary, relief for patients—useful for doctors in a pinch.

But Grinstead says his experience with chronic pain patients has demonstrated the limits of opioids long-term.

“Buprenorphine might work better for many people than OxyContin or oxycodone or even methadone,” says Grinstead.

“[Chronic pain] patients don’t always do well on opiates,” he says. “They develop tolerance, so the benefits don’t last long enough. They become more disabled over time,” rather than more functional.

Kornfeld specializes in both addiction and pain. His rare medical niche shows him victims from both sides of the opiate war. As an addiction doctor in wealthy Marin, he treats teenagers who’ve become severely addicted to Vicodin or Oxycontin, which they acquire from friends or classmates, or appropriate from medicine cabinets with surplus prescriptions.

But while some doctors are too liberal with painkillers, others are overcautious. Kornfeld sees pain patients, abruptly cut off from opiates by their doctors, after months of high doses. This causes a downslide with potentially dangerous side effects like acute depression; plus the added stress of being treated like a criminal.

Destandau says opiates gave her fleeting relief. Her pain subsided for an hour or two before symptoms sprouted up. On bad days, she dwelled in a cycle of dread and anticipation of the next dose.

“Opiates are a masking effect,” Destandau says. “Then I’d start noticing that my attention is being drawn away. I’m adjusting my seat, my spine is burning, my knee starts to throb.”

And the daily drugs depressed her, and deadened her senses. She tried methadone, which was longer-acting, but she found herself steadily needing higher doses.

“Ultimately our goal is to get them off everything,” says Kornfeld. “Once they are stable on buprenorphine, they can start lowering it incrementally, whereas patients on morphine or Vicodin, or methadone—they very rarely lower the dose.”

Destandau says buprenorphine now works as well as the old regime. And, she says, “I have mental clarity.”

Buprenorphine, though permitted for off-label use by the FDA, is tightly regulated by law enforcement. In order to prescribe buprenorphine for opiate addiction, doctors need a special license from the Drug Enforcement Agency. Once certified, they can maintain a maximum of 30 patients with buprenorphine at a time.

When prescribed for pain, there are no such restrictions. But doctors who don’t have specific curiosity about buprenorphine are unlikely to become acquainted with it, says Grinstead.

“Because buprenorphine hasn’t been marketed for chronic pain, everyone says ‘it’s for addicts,” he says.

Since its inception in the 1960s, methadone wasn’t used for pain. Only in the last ten years or so, as worries about opiates rose, has it become a standard for use in chronic pain.

Contrary to popular perception, studies show the majority of people who are prescribed opiates for medical reasons do not become addicted. Addiction implies continued, nonmedical use despite harmful effects. Opiate-related accidents and overdoses mostly happen when drugs are diverted—sold, given away, or stolen from people who had prescriptions. One large study of patients entering treatment for OxyContin addiction showed that most had never received a legitimate prescription for the drug.

Buprenorphine is much more difficult to abuse—it actually diminishes the effect of other opiates—and so less frequently diverted.

The Highland clinic does not rely solely on pain medication. Patients see psychiatrists for depression, and meet with counselors; they examine the psychosocial issues that arise with long-term pain, like employment and housing instability.

Destandau never thought she’d be cured of pain—she says she doesn’t entertain miracles. But the clinic has helped to change her perspective.

“It gave me a break from this opiate-induced life I was having,” she says, “It presented another idea. I thought, ‘Hey, if I can stabilize some other things, maybe I won’t need so much medication.’ I can actually see living without the opiates. I would never have imagined that before.”

Note: This story has been updated. An earlier version of this story stated incorrectly that Howard Kornfeld is board certified in psychology.