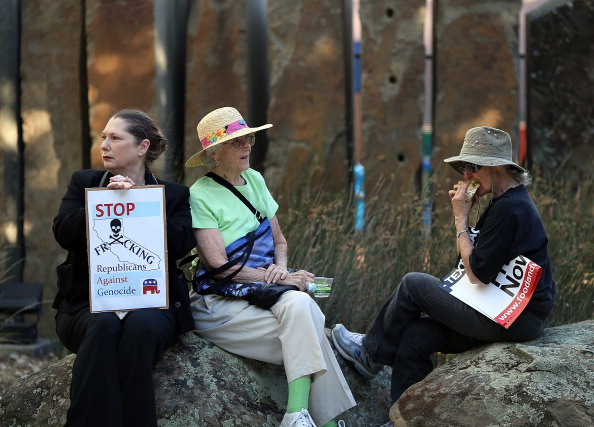 In a remote Ventura County field, hydraulic fracturing has chipped away at underground rock, helping release more than 80 million barrels of oil since drilling began in the 1890s.

Now, some 60 years after hydraulic fracturing began at Sespe field in Fillmore, state officials are trying to decide whether to tighten rules on the “fracking” operation, as it is known, and dozens of others like it in the state.

Hydraulic fracturing is the process of injecting highly pressured fluid into a well to crack underground rock. This allows oil and natural gas trapped in the rock to flow into a below-ground reservoir so it can then be extracted.

Oil companies say the extraction technique is an economic dream come true for the cash-strapped state, but environmentalists call it a chemical-laced nightmare.

Whether it continues in its present, lightly regulated form will be up for the California Department of Conservation and legislators to decide in the coming months.

“There is no regulation right now for oil and gas operators to tell us where they have fracked a well, and we understand that is a concern to the public,” said Jason Marshall, chief deputy director of the state’s Conservation Department, which regulates oil drilling. “We are trying to move in a direction that we have better reporting.”

Last year energy companies used hydraulic fracturing to tap at least 628 oil and natural gas wells in California, according to the results of a Western States Petroleum Association membership survey released last month. The majority of wells produced oil and were located in Kern County, according to the survey.

The Brown administration is holding a series of public workshops across the state this spring and summer to gather input on the practice. The second meeting, held May 30 in Ventura, drew nearly 200 people, with activists calling for a ban on fracking and energy firm executives saying the practice is safe.

Hours before the meeting, the California Senate narrowly rejected a bill that would have required energy companies to notify property owners before conducting fracking operations on or near their land.

Currently, energy companies that use hydraulic fracturing in California must abide by all state laws for oil and natural gas drilling, but there are no regulations specific to fracking. The companies also aren’t required to report the mix of chemicals they inject into underground rock to release oil and gas.

Hydraulic fracturing has alarmed environmental activists in recent years, who say it can pollute groundwater, harm wildlife and potentially cause earthquakes.

At the Ventura meeting, representatives from the Sierra Club, League of Women Voters and Center for Biological Diversity spoke out against the extraction technique.

“California has always been a leader in protecting our environment,” said Jim Hines, the Sierra Club’s Los Padres Chapter representative. “… I would urge the Department of Conservation to consider a very simple rule and regulation in the state of California. It’s real easy. It’s three simple words: No fracking period.”

The Petroleum Association has taken steps toward self-reporting fracking operations in recent months, amidst pressure from lawmakers and activists.

At the Ventura workshop, Nick Ortiz, the association’s manager of production regions and property tax issues, said the companies he represents are willing to work with the state to craft more regulations, but they believe the practice is safe.

“To date we have no evidence of groundwater contamination or environmental harm,” he said.

Jim Mansdorfer, an engineering manager for Southern California Gas Company who attended the meeting, said he thinks more disclosure is warranted, but he says the state’s new regulations shouldn’t impinge on energy production, which helps drive the state’s economy.

“There has to be a balance so that it’s not so burdensome that you can’t get a permit to do it,” he said.

The majority of local residents who spoke at the meeting, however, said they wanted to see fracking strictly regulated or banned outright.

“Before they’re allowed to do anything, I’d like to see them come up with a proposal that evaluates how damage will be dealt with should it happen and have them have to pay for a neutral third party to do the evaluation,” said Ventura resident Katherine Larson.

Fracking is typically done after a well has been tapped of its easily accessible oil, Marshall explained in an overview of the practice before taking public comments.

“This can be a preferred alternative to drilling more wells,” he said.

To illustrate the concept, he asked the audience to imagine his 6-foot 1-inch frame was a 6,000-foot well. Drinking water would flow between his nose and the top of his head, whereas fracking would occur between his ankles and soles of his feet, he said.

“The fracking would be the size of a toothpick (and last) for about an hour,” he said.

Department officials are looking into whether fracking can cause earthquakes, but so far they do not have any evidence that the practice has been harmful, Marshall said.

In Ventura County, fracking has occurred for decades in some oil fields, including since the late 1950s in Fillmore’s Sespe field, said Brad Elliott, vice president of the west division of Seneca Resources, an energy company.

“This is something that has been going on for 60 years and it’s worked out real well,” he said.

But there are other factors to consider besides the money, Hines said.

“That field is on private land, but it abuts the California condor refuge, a protected refuge for endangered species,” he said. “We don’t know what chemicals they’re shoving into the planet there and if something bursts or breaks, all kind of sinister things are going to happen to animals and to the people themselves.”

The first state workshop was held in Bakersfield on May 16. Upcoming workshops will be held in Salinas on June 27, Santa Maria on July 11 and Sacramento on July 25.