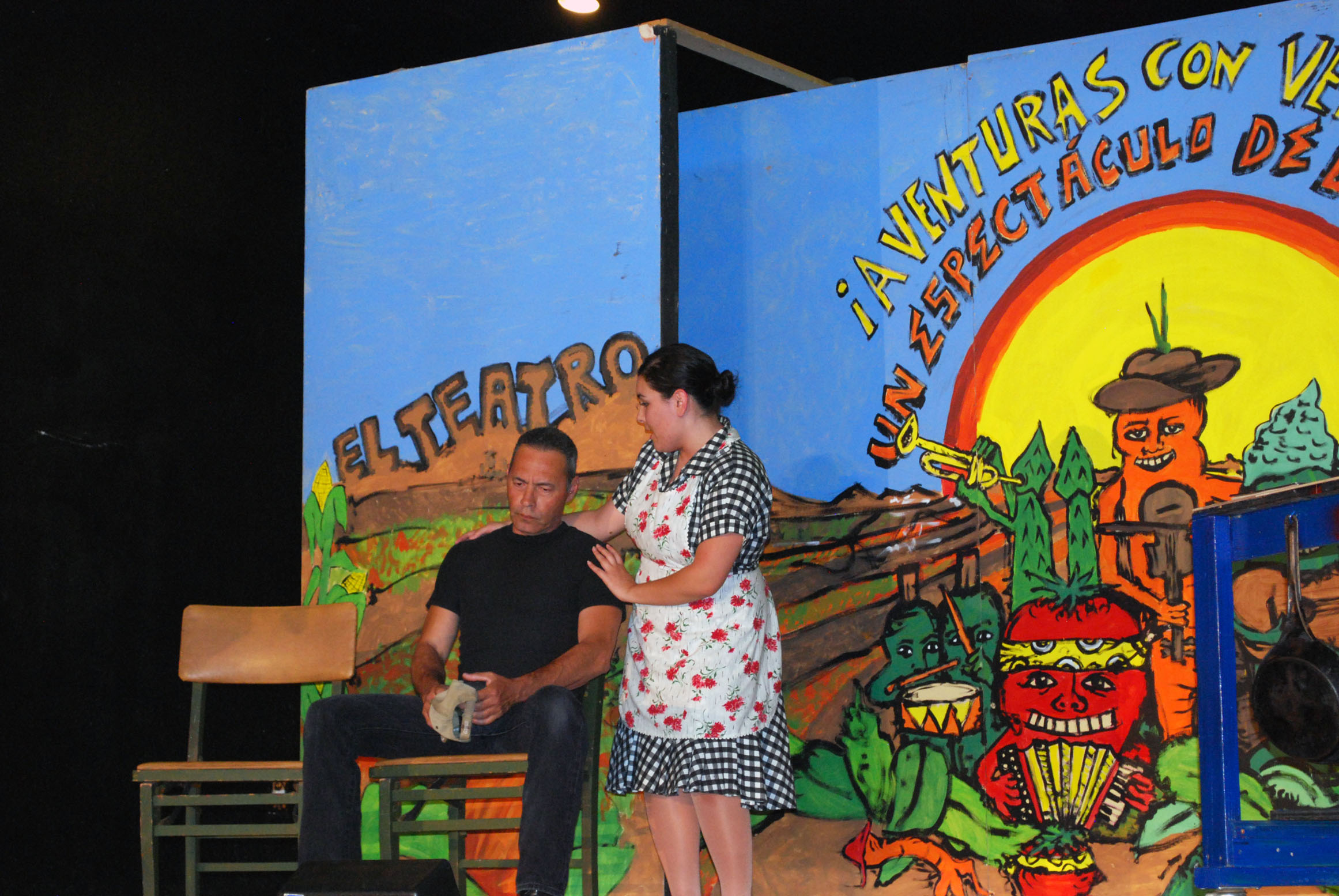 A theater troupe that got its start during the farmworkers’ movement of the 1960s has partnered with the Network for a Healthy California to promote healthy eating among Latino families in rural communities.

El Teatro Campesino, which was founded in 1965 during the Delano Grape Strike, created a variety show that mixes Spanish and English, music and dancing and vignettes for adults and children all focused on living a healthy lifestyle.

“The play is for the whole family,” said Lupe Covarrubias-Martinez, the Latino campaign coordinator for the Network for a Healthy California, also known as Champions for Change. “It lets parents know they need to be a role model for children.”

The 2009 California Children’s Healthy Eating and Exercise Practice Survey, conducted by the California Department of Health, found that children in California eat an average of 3.1 servings of vegetables a day (including fired potatoes and deep-fried vegetables.)

Only 18.6 percent of the students surveyed reported eating five or more servings of fruits and vegetables a day. The average for Latino students was 18.4 percent. Apples were the most popular fruit choice for Latino children, followed by orange juice and apple juice. For vegetable choices green salad, carrots and tomato sauce were the top three selections.

The goal of the play is to change some of those numbers.

Covarrubias-Martinez said they worked with an agency based near Sacramento, Taller Arte del Nuevo Amanecer (translated to workshop for the arts for a new dawn) to commission the play. Network for a Healthy California had received funding from the United States Department of Agriculture to put on the show and were hoping to do pilot performances in Sacramento and Salinas.

“They looked around to see who would be a good fit,” she said. “El Teatro writes plays and performs. They know the area and target audience. We talked to them and they said we do need to bring the issues out in the community.”

Kinan Valdez is a producer on the show and a member of El Teatro Campesino, based in San Juan Bautista. He said the Network had three main issues they wanted to address with the play, which they first performed last year. The issues included childhood obesity, the promotion of healthy eating and active living with the adult population and spreading the word about CalFresh, the food assistance program for low-income residents. This year they performed in Salinas for the second time, in Watsonville, and will also perform the show in Oxnard and Parlier later this summer.

“We thought targeting each point one on one would be more successful,” Valdez said.
Out of the brainstorming sessions with staff members from the Network, they created “Aventuras Con Verduras (Adventures with Vegetables),” a variety show that is similar to the “Actos” format El Teatro members first used in the fields while picketing for farmworkers’ rights – short, humorous plays with lots of music and dancing.

At one of the May performances, families gathered on a weeknight in a youth center to watch the show. As they arrived, they signed up to win a raffle for a bike and sampled salsas from the latest Champions for Change cookbook.

The kids exclaimed about how good the food tasted – two corn tortilla chips topped with three kinds of fresh-made dips – and told others who arrived that the snacks were free of charge. The dips included a pear mango salsa, a salsa fresca and a jalapeno and black bean dip – all made with fresh fruits and vegetables. Other snacks included a trail mix with nuts and dried fruits as well as water served with cut up bits of fruit, such as watermelon and cantaloupe.

“The plan is that we want to film the play so we can make DVDs to give out to community agencies,” Covarrubias-Martinez said. “They can show it in reading areas, classes or at clinics. They can show the play in areas (of California) we can’t get to.”

Covarrubias-Martinez said about 24 families showed up for the performance in Salinas. In Watsonville, a city to the north in Santa Cruz County, they anticipated a larger audience. As the show got under way, adults and children laughed at the many jokes mixed between Spanish and English.

The skits drew the most audience response, especially a piece about a young boy who wants to watch TV and eat snacks all day.

In “Chuy Chicharron y La Muchacha Remolacha (Chuy Chicharron – fried pork skin – and Beet Girl)” Chuy is off school. Though his mother encourages him to go outside and play, he feigns illness so he can stay inside to watch Lucha Libre wrestling on TV, play videogames and eat his fried snacks. When his mother becomes frustrated with him, she calls for help. Beet Girl, a superhero, shows Chuy how the foods he eats and lack of exercise are hurting him, encouraging him to make a change for the better.

Another skit focused on the adults in the room. Valdez said they made sure to use humor to deal with a sensitive subject. In the format of a telenovela, a Spanish soap opera, they tell the story of a family that does not have enough food.

In the piece, the husband has had his hours cut and fears he may be laid off. His wife skips dinner to make sure there is enough for her husband and children, but she knows that she does not have enough healthy food for the rest of the week.

Her favorite food star and a game show host arrive to tell her that she can get nutritious food for free – the only catch is that she has to tell her husband who is a proud man who is unlikely to accept assistance. Through music and laughter, they show the family accepting the help of Calfresh to get healthy foods.

“We knew it was a heavy topic,” Valdez said. “We did it in a telenovela format to alleviate some of the seriousness of it. It is all based on extensive research.”

According to the California Food Policy Advocates, a nonprofit advocacy group, 3.9 million Californians were enrolled in Calfresh in December 2011, though estimates are that more than half the families in California who are eligible for the program are not enrolled.

“It’s just a very fun, entertaining show,” Covarrubias-Martinez said. “It has lots of music and dancing, but it gets the message that families do need to eat healthier.”