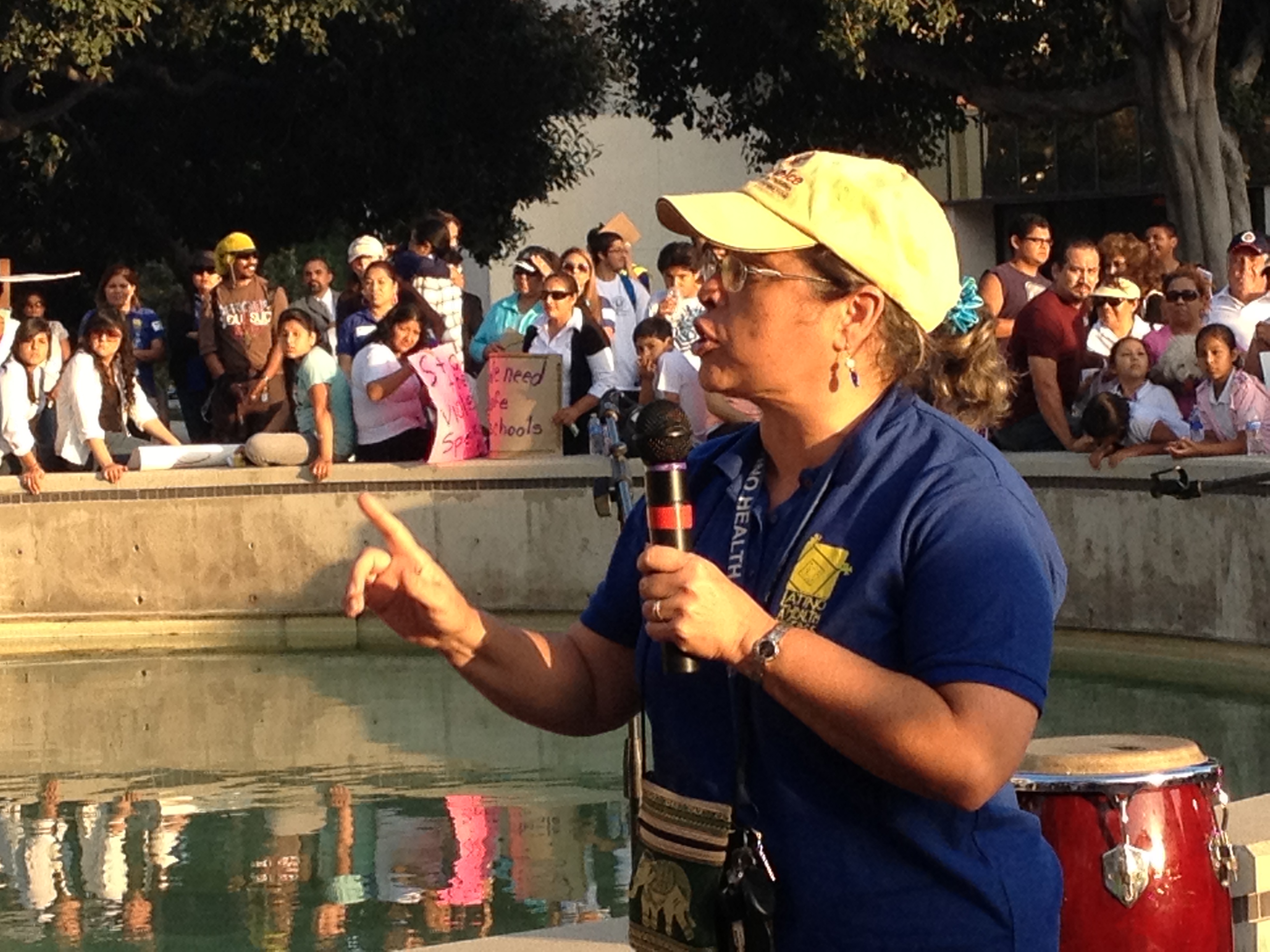 Crime in Santa Ana has been bad enough lately to bring residents to their knees. Instead they decided to get up and walk.

The “Walk For Peace” was collaborative effort between the city and the California Endowment and Latino Health Access, with roughly 250 Santa Ana residents marching from Santa Ana High School to Sasscer Park. The early June march was a response to two shootings and one stabbing, all occurring within hours of each other on April 27 near Santa Ana High School and Willard Intermediate School.

People carried a banner peppered with the names of residents who have fallen victim to crime over the years, and chanted messages about the right to live in peace. A rally in the park signaled the march’s end, where speakers vowed not to let their community be overtaken with fear and push their children into hiding.

The common message shared by speakers: the children of Santa Ana should not be afraid to walk the streets and they shouldn’t be afraid to go to school.

“The right to live in peace is mine,” said Director of Latino Health Access Dr. America Bracho, addressing a crowd that included dozens of Santa Ana youth.
She also warned against indifference. “When those kids were killed, the other kids said ‘Don’t look at them,’” Bracho said. “We must teach our children to see.”

Nani Calvillo, 29, moved to Santa Ana after taking a job as a third grade teacher at Monte Vista Elementary School. She’s raising her family in Santa Ana with her husband.

Calvillo joined the Walk For Peace, she said, because her students accept violence as a fact of life.

“We’ve had two lockdowns in two months,” she said of violence at the schools.

“And they are desensitized to this. They sit through it unfazed.”

Bracho told the crowd that Santa Ana children “should not become indifferent, because it is not normal.”

“What is normal is for kids to play in the streets,” Bracho said.

The coordinators, volunteers and residents who participated in the walk want a safe neighborhood where youth can thrive. But finding the solution may be a little less straightforward than walking from Santa Ana High School to Sasscer Park.

The shootings and stabbing were gang related, a problem that goes back generations in Santa Ana.

Virginia Mosqueda, Program Manager for the California Endowment’s Building Healthy Communities initiative – an effort to transform the community into a safe one where residents can thrive – acknowledges that the transformation is not a smoothly paved path.

The ongoing criminal activity that not a reason for inaction, she said. Short-term efforts such as the Walk For Peace are just as important as her group’s long-term strategic plan.

“We still need to go out there and show that we care, and this is unacceptable, and we want to make the change, make this community one that is conducive to healthy living,” Mosqueda said.

Santa Ana’s problem with gangs is multifaceted and multigenerational, said Corporal Anthony Bertagna of the Santa Ana Police Department. Santa Ana has over 100 gangs, he said.

“There’s tradition in this, and there’s a lot of pride in the neighborhoods,” Bertagna said. “Somebody’s grandfather was a gang member, and then their father and now them.”

There are other forces influencing the department’s ability to control gang activity, and there are no short-term solutions to them, Bertagna said.

One of them is the chameleon-like nature of gangs. “We change and adapt, and so do they,” Bertagna said. Gang members monitor police activity and patterns as carefully as the police monitor them, he added.

As the rally came to a close, a man on guitar sang John Lennon’s “Imagine.” Latino Health Access staff urged all members of the crowd to leave “before it gets dark.”

That same evening as the rally continued, Santa Ana saw yet one more shooting before the sun had set. Many people who had participated in the Walk For Peace returned for a candlelight vigil that following Sunday.