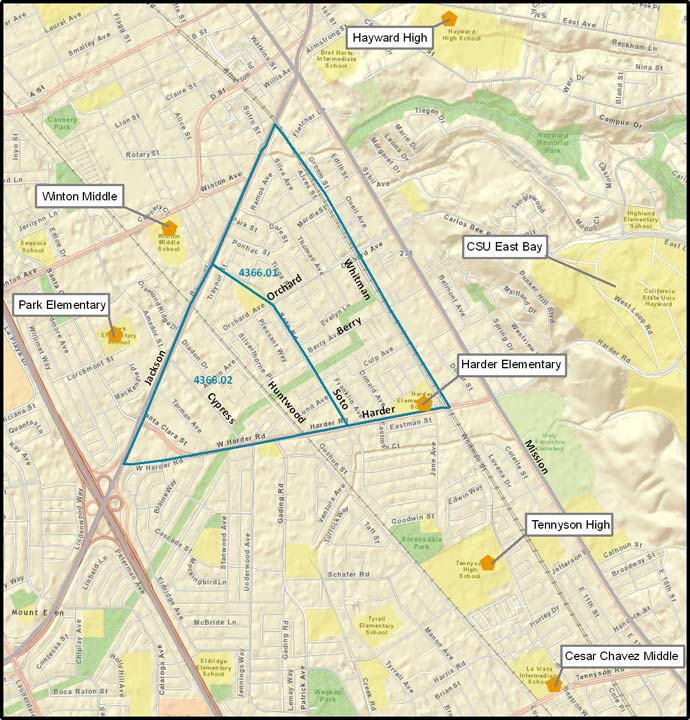 Larry Romer wants a better future for his son and his hometown in Hayward. The 44-year-old grew up in a neighborhood known as the Jackson Triangle, a diverse and low-income area. Larry stays involved in the community – he tutors school children, coaches baseball and sits on a school committee at his son’s school – but despite his own efforts or the efforts of others, the schools and the neighborhood have deteriorated.

“Me, my cousins, we all grew up in this area, but we’ve been seeing it going downhill more and more,” he said. At the heart of the issue, he said, is the lack of resources available for the schools in Hayward.

“It’s the same as anywhere else right now in the state of California – it’s really struggling,” Romer said. He is father to a 12-year-old son, a student at Harder Elementary, inside the Jackson Triangle.

“They’re losing quality teachers, they’re not able to implement programs that were available to me when I was a kid. They’re just not there, “ he said.

But thanks to the successful collaboration of several civic and community agencies, Romer’s old neighborhood, one of Hayward’s most vulnerable, has been awarded a momentous grant from the Department of Education that will provide nearly $25 million dollars in support services and programs over a five-year period.

The funding is part of a Department of Education program called the Promise Neighborhood Program. The program aims to assist students and families living in low-income communities by providing resources so its children are on track for a quality education and career.

“The whole philosophy behind the program is to create a system of supports and structures and ultimately improve the educational services for all the people in the Triangle,” said Andrew Kevy, the Project Manager Coordinator of Child Welfare and Attendance for Hayward Unified School District (HUSD).

Launched in 2010, the program made available $10 million dollars in planning grants to 21 communities nationwide. Of those communities, the Hayward Promise Neighborhood was chosen as one of five communities to receive an implementation grant, nearly $25 million dollars over a five-year period. The funds will go towards implementation plans to support “cradle-to-career” services to create a multi-faceted approach that supports a community from multiple angles.

The Promise Neighborhood program is modeled after programs like the Harlem Children’s Zone, which provides nearly a 100-block area in Harlem, New York, with parenting centers, early learning opportunities, and social service programs and has dramatically improved students’ academic outcomes.

The program focuses on a holistic approach to rebuilding a community to break the cycle of generational poverty and put its children on track for quality education and careers. The initiative includes a variety of services from parental education to neighborhood health and safety services to providing technology classes to small business owners.

California State University, East Bay is the lead agency heading the Hayward Promise Neighborhood initiative. They are joined by many partners, including the Hayward Unified School District, Chabot College and the City of Hayward.

“This is very much a collaborative effort; no one entity can make this happen,” said Dr. Sue Rodearmel, the Principal Investigator for the Hayward Promise Neighborhood and an Assistant Professor of Kinesiology at CSUEB.

Rodearmel said that integration and collaboration are a key part of the ultimate goal of the Promise Neighborhood initiative. “It’s about systems change; it’s about breaking down agency silos so that this truly does become integrated work across multiple, multiple groups that can make something of this magnitude happen.”

Kevy said that one of the main focuses of the initiative is to build and enhance the infrastructure so systems work more effectively together. He explained that while many services like counseling services or supplemental academic programs have existed at the schools in the past, lack of communication left them somewhat disjointed.

“Along with enhancing services, one of our intents [with this initiative] is to develop the infrastructure to get everyone talking around the same table so we can better see who’s accessing what,” he said.

In 2010, the Hayward initiative received a one-year planning grant to support the plan of how a Promise Neighborhood could be implemented. This allowed stakeholder groups, led by Cal State East Bay, to conduct community surveys, public forums, and collect data to determine where the need for funding was most concentrated.

According to Chien Wu-Fernandez, Executive Director of student and family support services for HUSD, “[The stakeholders] looked at, geographically, where in Hayward we wanted to concentrate some of our resources as a proposal for this grant…which parts of Hayward have high needs, have schools that are in need of improvement, that have a lack of access to resources and some of those things we looked at as part of the conversation was where we should focus our efforts on.”

In the end, it was Larry Romer’s neighborhood, the Jackson Triangle. According to the assessment report, the triangle is a diverse neighborhood and low-income community “whose families struggle with difficult economic conditions, underfunded schools and a range of other challenges.” The area was also a good candidate because it had local assets that could provide a foundation for additional services.

Romer participated in the planning committee, and he said he wanted to try to have a real and lasting impact. “That was my biggest part about being on the committee: trying to make a difference, not just talk about it, but getting into it and doing something about it,“ he said.

Sue Rodearmel was careful not to offer any specific timelines for when services will be in place. Because the award announcement is so new, and so many agencies are involved, it is important that they move forward carefully and cohesively, Rodearmel said. The next few months will be about hiring people into the positions, and working with the bureaucracy of DOE to get the award money in hand.

“The first four months or so are slow, but then after that things will just explode exponentially,” she said.

Larry Romer is looking forward to the journey. “Hope – it’s the best way to describe it,” he said. “Just that people are out there still trying, and there’s hope and there’s a light in the future – it’s not all grim and continuously going backwards. Things are going to change in the community,” he said.