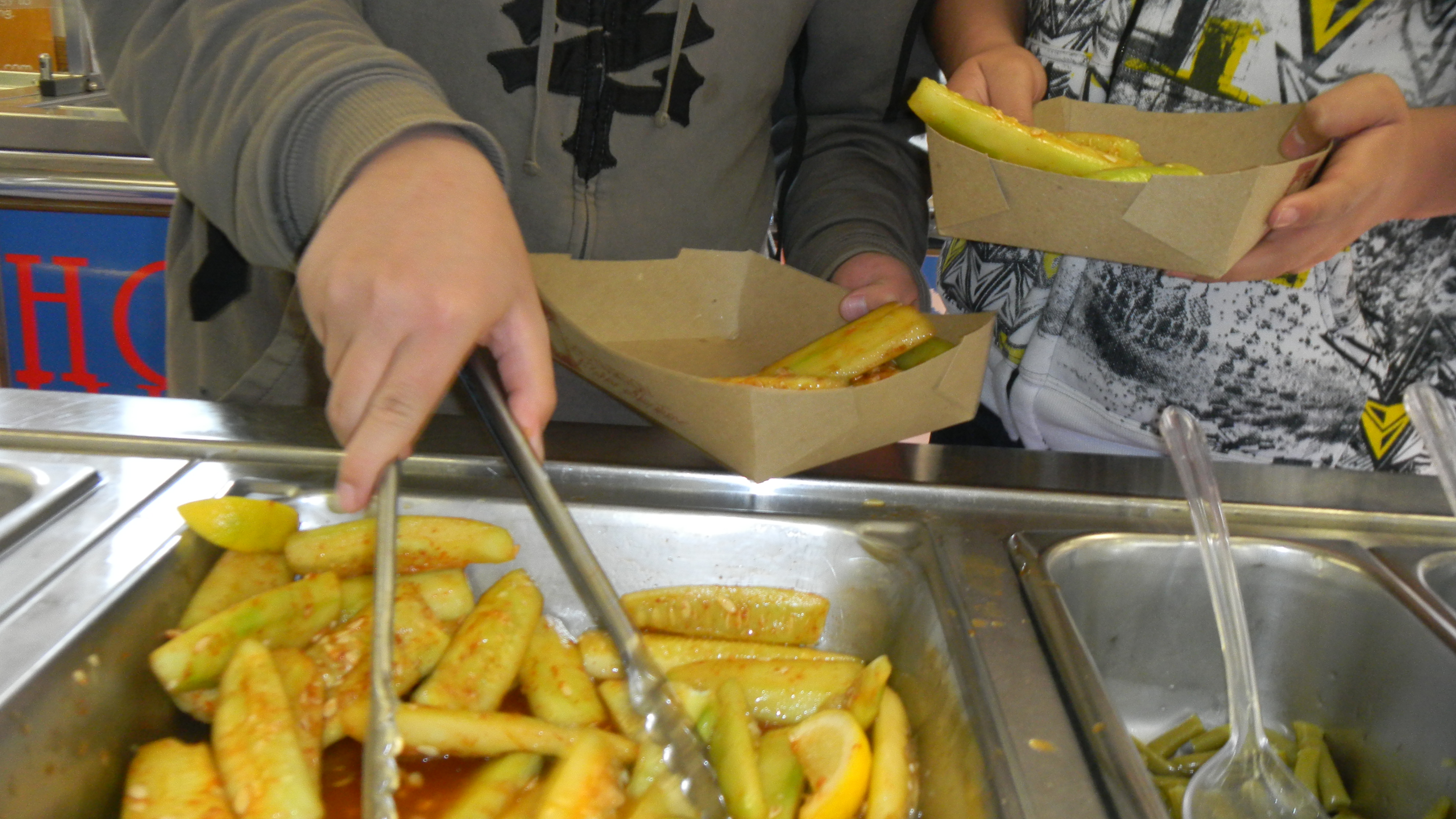 When you ask a middle school student what they think about their school cafeteria lunches, you may unleash their inner food critic.

“Their chicken’s always soggy. They don’t make it right.”

“The vegetables are kind of nasty. I like the kiwi, the grapes, the whole fruits, but nothing else.”

It’s 1:05 pm at Hoover Middle School in Merced and the students race through the cafeteria door to refuel their bodies. But before they reach the chicken tenders, nachos, cheeseburgers and peanut butter and jelly sandwiches, they pass the produce bar first – stocked with broccoli, green beans, cucumber wedges, pears, bananas and strawberry cups.

Many of them don’t even glance at the fruits and vegetables, but others actually stop and scoop up a few cucumber wedges. Even more grab the strawberry cups.

“They’re frozen like ice cream and when they’re slushy, you can see the strawberries and it’s sweet,” said one 6th grader.

For Terri Soares, Merced City School District Nutrition Services Director, it’s all about making the food familiar to students – from its taste to its shape.

“Merced city kids have 4 flavor profiles that they know – fat, sugar, salt and fast food,” she said. “And unfortunately, introducing anything outside of those flavor profiles, [they need to become] accustomed to it.”

Even the cucumbers are strategically served. Cucumber slices were initially unpopular with the students, so Soares improvised.

“Kids know french fries, they know carrot sticks,” she said. “So we went to a cucumber wedge and we peeled off the green. And first of all, it didn’t discolor and secondly, we added lemon to it and all of a sudden, kids took it more.”

Since Soares started her job five years ago, she and the Nutrition Services department have gradually changed the school menus, minimizing sugar, sodium, saturated fat and trans fat and adding more fruits, vegetables and whole grains. She’s eliminated juice from lunch, strawberry milk from all menus and reduced the amount of times dessert is offered to one time per week. She has also increased the amount of fresh produce offered to two or three items every day, as well as the number of products that contain at least 50% whole grain.

Every bit counts, especially when 34.1% of Merced County residents age 18 and over is obese, the second highest rate of obesity in California, according to the UCLA Center for Health Policy Research.

“Because of our socioeconomic status, I believe it’s even worse because many parents aren’t aware of healthy eating practices or may have not been taught or maybe don’t have access to healthy foods,” Soares said.

The U.S. Department of Agriculture has stepped in to regulate school meals across the country. The changes Soares has implemented reflect those standards.

One particular USDA requirement Soares says she and her department will need to focus on is ensuring students take an appropriate amount of produce at lunch, which can be one of four options: 1) one cup of greens or salad, 2) half a cup of fruit or vegetables, 3) one piece of fruit or 4) a quarter cup of dried fruit. That rule begins next school year.

Soares says the challenge will be training students to want to put produce on their tray and eat it.

“I can menu-plan just about anything,” she said. “But without nutrition education efforts at home and in the classroom most of the produce students will take may be tossed. Our department, Nutrition Services, cannot get students to eat produce alone.”
Ashanti Vigil is one parent who’s taking on that challenge after a wake up call about a year ago.

“I was concerned, I was feeling chest pains and that deeply concerned me,” she said. “Also, I had a close friend that passed away of cancer at the age of 40. The culmination of both of those things really opened my eyes and gave me a whole new perspective and I thought I’ve got to make some changes.”

So she and her husband, plus their four daughters, cut down on some of their favorite foods and drinks – fried chicken, spaghetti, honey buns, mayonnaise and Mountain Dew. They also joined a gym. Now that they cook at home more, Vigil is able to introduce nutritious food to her kids.

“I went to my neighborhood grocery store and there’s a section where they had discounted packaged vegetables – red bell pepper, green bell pepper, squash – and it was like three bucks. And so I took it home and chopped it up and said, ‘You guys are going to have to eat this.’ And they loved it.”

Luckily, parents and the Nutrition Services department aren’t alone in introducing new food to children. Some teachers are teaching nutrition in their classrooms. The Merced County Office of Education provides them with food, lessons and healthy recipes through a program, called Harvest of the Month.

“A lot of kids when I pull out whatever food it is for the month, a lot of them will say, ‘Ew! I don’t like that! Ew! I never tried that before!’” said Hillhouse. “Our rule is you have to try it – at least one bite. And the majority of the time, they all enjoy it.”

With their special safety knives and mini-aprons, Hillhouse’s students learned how to prepare a healthy banana split made of bananas, oranges, mandarins, grapefruit, yogurt and granola.

“I think at home a lot of times, they don’t get a chance to be helper and cook and learn those kinds of skills,” Hillhouse said. “Here, they learn to slice and chop and things like that. It’s really fun for them.”

That’s the focus at Farmdale Elementary – making health fun. Instead of rewarding students with candy, the staff rewards them with activities, like an extra recess or structured dancing with a DJ.

And that structured activity isn’t just for kids. Farmdale Elementary has an after-school workout program for teachers twice a week. In the spring, they’ll also open their campus to the community for sports and other activities, like dancing, yoga and martial arts. The Central California Regional Obesity Prevention Program (CCROPP) received a $25,000 grant to fund this community program.

“We want to create those opportunities where kids do have access to physical activity that is safe, organized and free to those kids who may never have an opportunity to play,” said Claudia Corchado, CCROPP Program Manager.

With four children and not enough money to pay for each of them to play on sports teams, Ashanti Vigil looks forward to more chances of community involvement.

“When we feel better, we are able to bless our community,” she said. I would like to see everyone coming together here. I think we need to take more ownership of our own lifestyles. The lawmakers – they don’t live in our neighborhood, they don’t go to our schools. I’m not saying that they don’t care. I’m just saying that it starts here.”